Spring is the best time of year to hike up either of Southern Oregon's Table Rocks. The sky is blue and fresh, life has returned to the land after a grey winter, and the humming of insects fills the air. Flowers are the jewels of the experience, since they are the epitome of Spring.
Part of what makes Upper Table Rock enjoyable to hike is that it's relatively quick and easy, not to mention very close to where I live. It takes less than an hour to reach the top of the mesa. Of course, with my camera I tend to stop and snap a few photos every time I see something interesting so it often means I spend most of the day exploring.
Shortly after setting out on the trail, Erythronium hendersonii takes center stage. It was in bloom as far as I could see in the forest understory on the first half of the ascent. I advise getting on your hands and knees to check out the intricate floral markings! These nectar guides may help bees (the primary pollinators of Erythronium) find the nectar reward at the intersection of the petals.
Inexplicably, bees were largely absent from most of the flowers lower on the trail. A few factors may have contributed to this. The manzanita was blooming further up the plateau, and the bumblebee queens which I suspect are the primary pollinators of erythroniums here were busy looking for suitable nest sites. One can only imagine.
As I continued to ascend the trail, honey bees became more prevalent on the erythroniums. Perhaps they've replaced the ancestral bumblebee pollinators. Maybe the bees which once pollinated E. hendersonii are now extirpated. Ranges of species change all the time, at least in evolutionary timescales. Many species of bumblebees have been seeing declines in recent decades due to habitat loss and diseases spread by introduced species. This is purely conjecture. 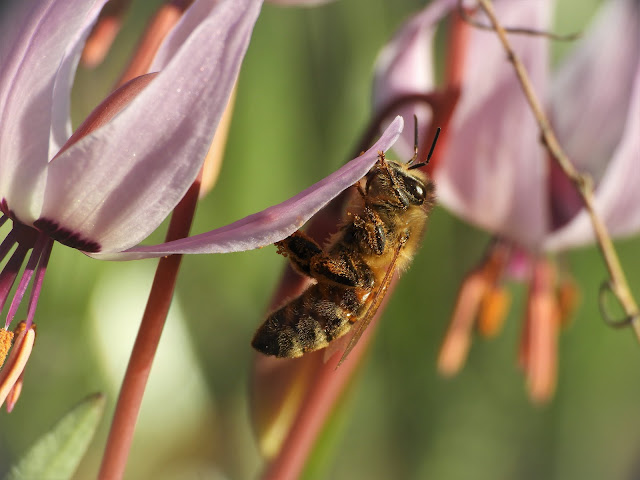 Honey bees appear to be adequate pollinators of E. hendersonii. The stigma is situated in a way that simply jostling the flowers (such as a bee landing on the stamens) may cause some pollen to move around. Most of the erythroniums that I've encountered in the Rogue Valley set seed every year despite potentially low numbers of pollinator visits. This apparent ability to set seed easily may be an adaptation to unpredictable spring weather. It's around this time of year that rain becomes an oddity and the next time water falls from the sky is autumn. Time to dry out.
The abundance and variety of bees now is astonishing. Protosmia is an osmiine bee (Megachilidae, leafcutter, mason, and resin bees) that nests in above-ground cavities. Records of nest sites is sparse, but some species have been known to make nests in things such as pine cones and snail shells! Another trait that makes Protosmia fascinating is that they overwinter as adults, uncommon in the Megachilidae. Their nests are capped with an excreted resin. Another peculiarity is that not all bees favor buttercups (Ranunculus spp.), and the pollen is even toxic to some bees.
It is likely beetles are often overlooked as pollinators. They're not as efficient, or perhaps charismatic, as bees. Beetles were pollinating gymnosperms like cycads at least 200 million years ago, at least 75 million years before angiosperms (flowering plants, plants most adapted to bee pollination) and bees every appeared in the fossil record. Many flower-visiting beetles don't travel from flower to flower as frequently as bees, but there are some with densely haired bodies which are important pollinators of some plant groups (including many of the large-flowered tulip species), many bearing bowl shaped magnolia-like blossoms.
Beetles visit flowers for a variety of reasons, though I don't know of any beetles that collect pollen for rearing young. Many beetles eat pollen, nectar, or the flowers themselves. In other instances, beetles congregate at flowers to mate. There are also parasitoid beetles which lay eggs on or near flowers, the larvae attaching themselves to bees to hitch a ride to the nest where they feed on the provisions supplied by the bee or the bee larvae.
Southern Oregon buttercup (R. austro-oreganus) are endemic to, unsurprisingly, Southern Oregon (specifically Jackson County, according to the NRCS). They are slightly larger than R. occidentalis, and they have reddish veins on the back of the petals. Upper Table Rock hosts a vigorous population on the first half of the trail.
I'm always intrigued by bees that visit buttercups. Many of the bees that collect ranunculus pollen are specialists, and the pollen would be toxic to many bees unable to metabolize it (Praz et al. 2008). That said, seeing a bee on a buttercup seems like something special. Pollen specialists need the pollen from their host plant in order to rear the next generation, which elucidates why maintaining a healthy balanced ecosystem is so crucial. Lives literally depend on diversity.
One plant that always results in a gasp is the beautifully checkered Fritillaria recurva, sometimes called red bells. Upper Table Rock sports a scattered population of the gloriously red bulbs. I have never once seen pollinators of any kind visit the flowers, but it isn't terribly surprising since I have never seen more than a dozen of them flowering in one place. Pollinators, particularly bees, are generally most attracted to large patches of flowers of the same species. The most F. recurva flowers I have seen in one place is maybe a little over a dozen. Besides all that, the morphological characteristics of the flowers suggest Ornithophily (bird pollination). Red tubular or bell shaped flowers with dilute nectar and slightly protruding stamens fits the bill. [Pun was accidental] 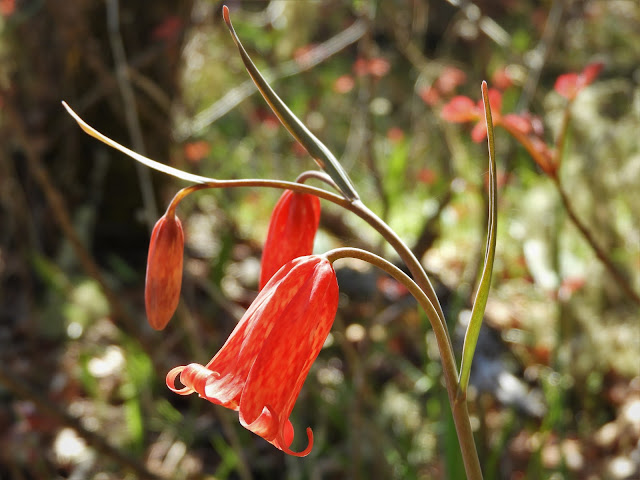 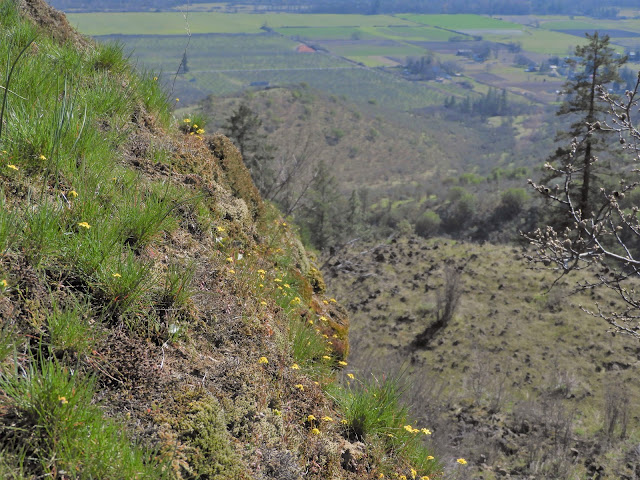 Here is a view of the unnerving dichotomy between Upper Table Rock and the surrounding landscape. There was a time, long before I was born, when everywhere was as serene and beautiful as Upper Table Rock. Humans have a superiority complex. 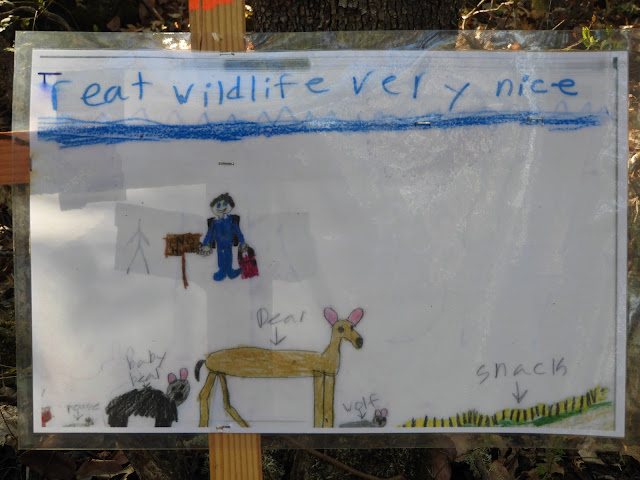 Children had left touching and important messages for the hikers. Treat wildlife very nice. The message everyone needs to hear. Take heed! 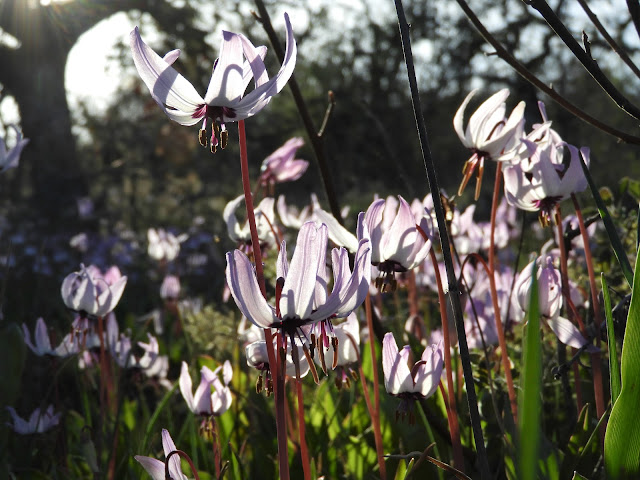