Today was the first day of this year that I've seen native bees in my garden. Upon reflection, I started gardening for the purpose of feeding bees. Each year I experiment with new plants, different species, and different gardening methods. In all honesty, it's chaos. Variables in nature are infinite, so everything I've learned has mostly been on accident. That's just the way nature works, everything acting on everything else. Most pollinators are pretty adaptive and will exploit any resource that works for them. This is what makes gardening so interesting. It's like rolling the dice and seeing what you get. This is especially true with nonnative garden plants, which is unfortunately most garden plants available. 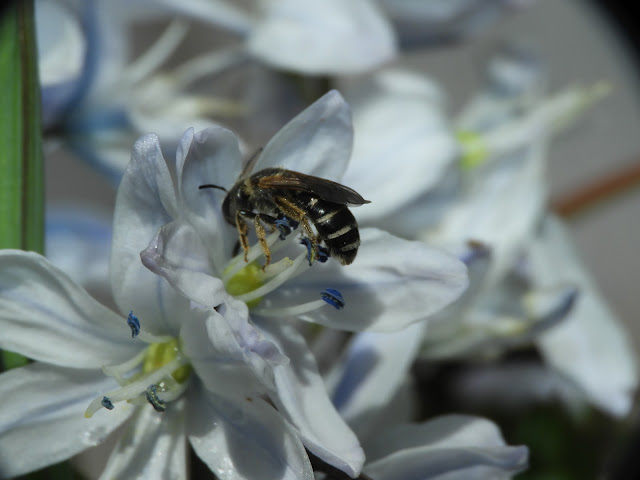 Scilla mischtschenkoana, with the ambiguous common name "white squill", is the earliest scilla to bloom in my garden. This is the first year I've ever grown it en masse, and I'm incredibly pleased with the results! Being one of the few things in bloom, the warm weather today has enabled bees to gather some nectar and pollen. A small ground nesting bee, about half the size of a honey bee, spent over ten minutes on a small patch. She may have been there longer, but I only watched for ten minutes. While the anthers appear blue, the pollen is actually a yellow buff color.
Of course, honey bees were there. Honey bees usually have other bees beat by numbers early in the spring since they go through winter with a large workforce. Bulbs, similarly, also get a head start. The reason many bulbs can bloom so much earlier than their herbaceous cousins is that they've stored energy in the form of a sugary bulb. It's like the little plants had a few Red Bulls early in the morning and are wide awake before the sleepy forbs. By blooming earlier they don't have to compete with as many plants. Come mid spring or early summer and there are many more things in bloom and competition is supercharged.
Crocuses along with tulips and daffodils are practically synonymous with spring. Unlike daffodils and tulips, most crocuses are highly attractive to bees and flies. They are also incredibly easy and reliable, growing in both sun and shade. As a rule, most spring bulbs flower earlier in soil warmed by the sun. Soil temperature may be part of what triggers blooming.
I was super excited to find the years first bumble bee in one of the large Dutch crocuses! As temperatures rise, bumble bee queens begin to emerge from their winter hideouts. Like a bear just coming out of hibernation, they're hungry, so they look for flowers to restore their lipid reserves so they can start a nest and rear the most important brood of the year. These firstborn are tiny versions of workers who help the queens transition from foraging to solely egg-laying machines.
Flies are some of the unsung heroes of the pollinator world, often being lumped into the "other pollinators" category. It's not well known that flies as a group are much more diverse than bees, and pollinate plants in environments and climates that aren't favorable for most bees. For instance, flies are probably more important pollinators in alpine and tundra environments where bees are restricted to days with favorable weather. Flies are also active earlier in the year than most bees, thus they are crucial for the pollination of many winter blooming plants.
A newcomer to my garden, the fun-sized Merendera sobolifera has won the affections of this fly, and my heart. This Merendera has traveled all the way from Eastern Europe to my garden, where its weird finger-like corm was planted in the fall with unknown expectations. I have been delighted to learn it to be one of the earliest bulbs to bloom in my garden, much to the delight of the fly. 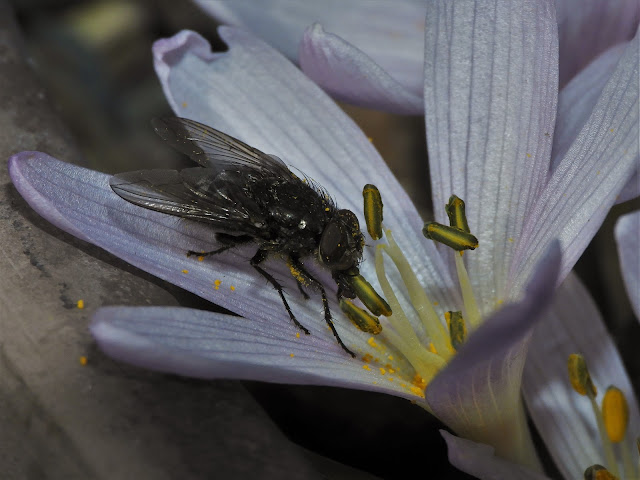 The fly spent more than ten minutes (again, I was only there for ten minutes) exploring the multiple blooms for what I can only assume was delectable pollen, to a fly anyway. Many flies relish pollen and nectar alike, though this one seemed particularly keen on the pollen. It even went so far as to dine on pollen that had fallen off of the anthers onto the petals. I can only wonder if flies are this plants primary pollinators in its natural habitat in Eastern Europe. 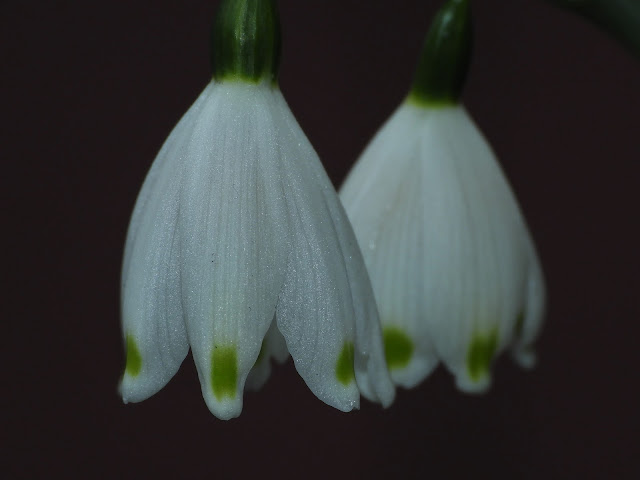 Many bulbs, however tasty us humans can imagine them to be, are ignored by pollinators in my garden. One such bulb is the spring snowflake, Leucojum spp. They're related to daffodils which similarly don't attract pollinators as well as other spring bulbs. Leucojum flowers aren't particularly showy, but are quite nice in macro. 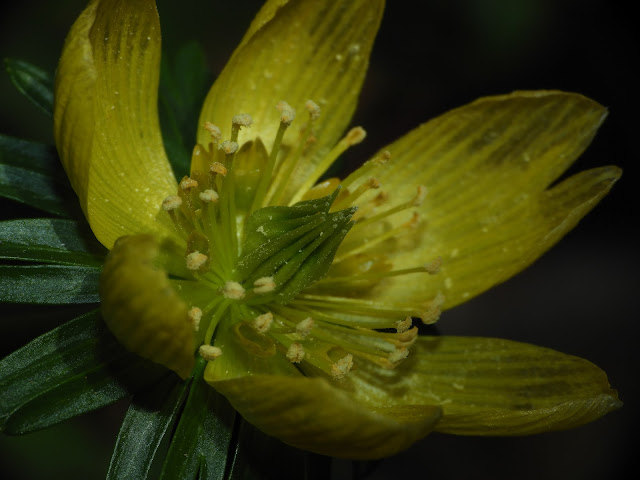 Another bulb that has been regretfully ignored by bees in my garden is the winter aconite,  Eranthis spp. I think as I increase the number of the plants in the garden they will become more enticing to the pollinator force. Their location in the yard may also prove unproductive since it's a shady area, while bees prefer plants in the sun this early in the year. 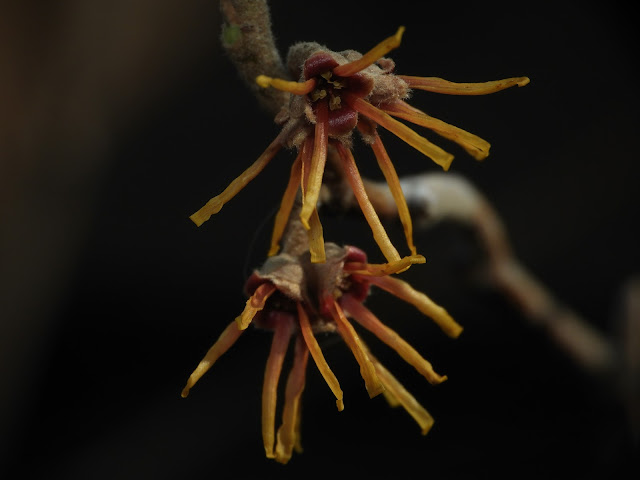 The witch hazels started blooming sometime mid January, always the very first blooms of the year. Strange cononut-esque shavings pretend to be petals, while the little cups in the middle emit a nice perfume in close proximity. Flies seem to like them, as do I. 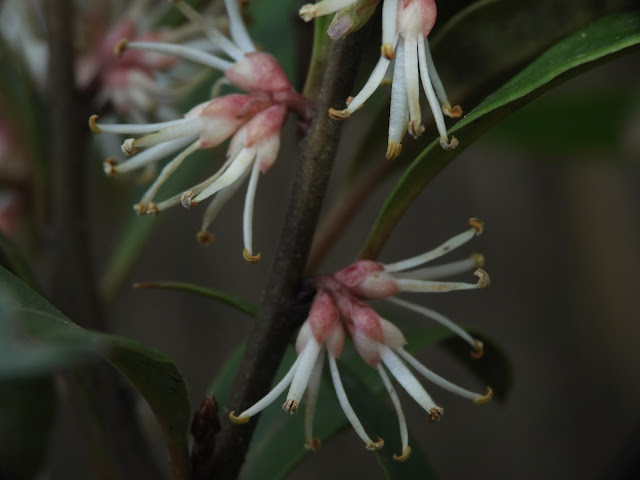 More newcomers to the garden are the sweetbox (Sarcococca spp.) shrublets. They'll eventually become respectable in stature, but apparently they'll take their time. Maybe my grandkids will see the full grown shrubs. 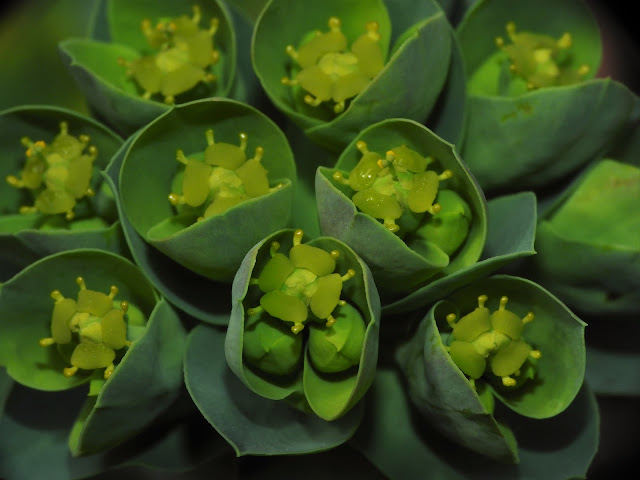 Definitely not going to lie, Euphorbia myrsinites is a total nerd plant. Otherworldly scaly serpents with alien flowers. Too cool! This spurge grows in terrible conditions and loves it. Mostly sunny spots with little water. It asks very little but gives much. 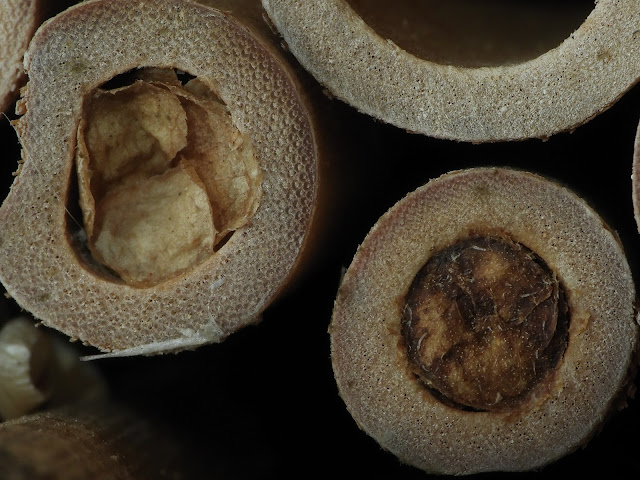 Seeing all the newly awakened pollinators and flowers is as encouraging as it is exhilarating. Early spring not only gives me hope, but also anticipation for what is to come! It's only a matter of time until the leafcutter bees come out of their nests. 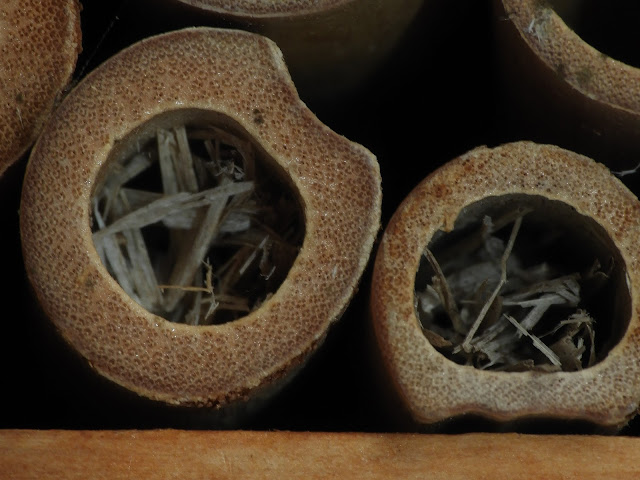 Grass carrying wasps, Isodontia spp., have also found my bee nest box to meet their needs. Seeing thin waisted wasps flying by carrying pieces of grass several times larger than they are is always somewhat of a surprise. I have yet to pop open one of their nests, but I have read these wasps provision the nests with dozens of orthopterans (usually small katydids and the like). 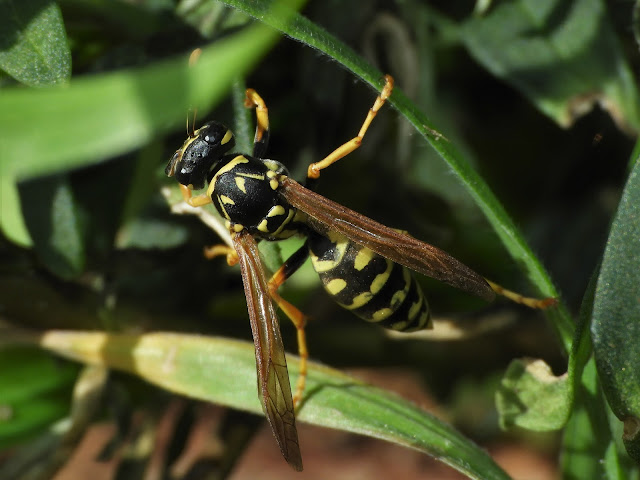 Speaking of wasps, I saw the years first paper wasp. European paper wasps, Polistes dominula, introduced to the US from the Mediterranean sometime in the 1970s. Unlike other Polistes wasps which prey primarily on caterpillars, these invaders hunt many types of insects.  Ants, small flies, and all manner of soft bodied insects are potential prey. 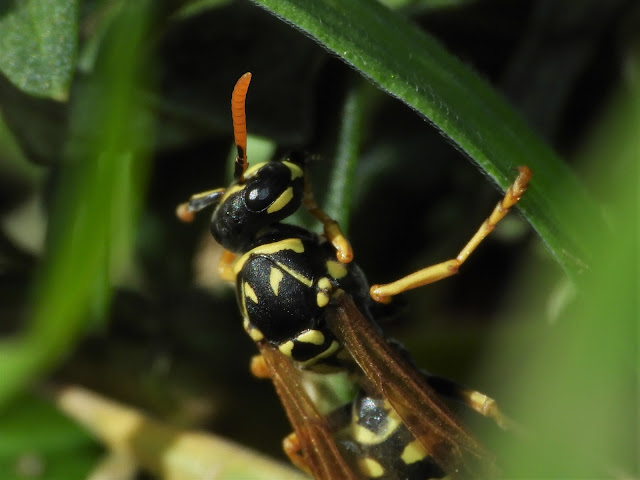 Polistes dominula is troubling for me. While I must accept they are inimical to the native paper wasps, they are beautiful. They are also fascinating, like other paper wasps, and like it or not they are here to stay. These wasps are part of the grand experiment that we have imposed on the earth, and someday we may finally see the results in all their impossible complexity.
Wasps show up in unexpected places. The tiny-flowered snow queen, Synthyris reniformis, blooms in my garden. Upon close inspection, a tiny insect sheltered inside a flower. Upon closer inspection, this insect appeared to be waspish in nature. What a delight! Lacking better magnification, identification is probably unlikely. Can knowing make it any more charming?
Wonder is a thing I hope I never lose, and something I'd like to encourage in my children. Keep looking down!
at 8:23 PM 1 comment: