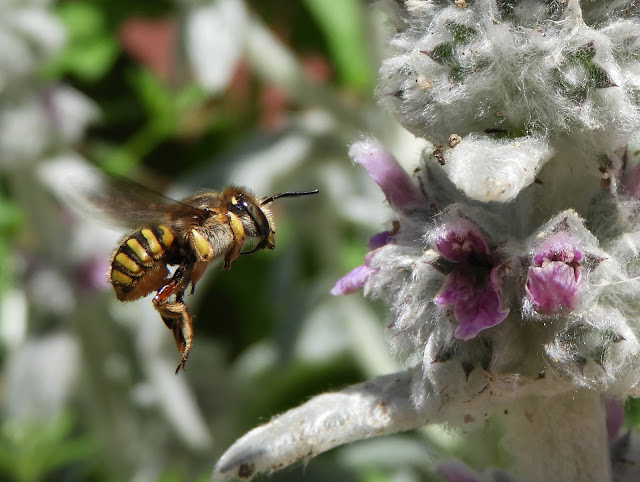 Here we are halfway through June. How is it already summer? It seems like just a few weeks ago the pears were blooming and I was working in rain and cold trying desperately to get the spring work done with the honey bee hives. Now it feels like summer is in full effect, rain is less and less in the forecast, and multitudes of bees are busily seeking mates and provisioning nests!
The most familiar and recognized bees are honey bees, poster child of pollinator conservation alongside monarch butterflies. But the overwhelming majority of native bees in the US and the world are solitary and nearly half of those collect pollen from only one family of flowering plants. Of course, the plant family varies between different bees. Many of the most common bees are generalists who visit a wide range of flowers from many families. In either case, a diverse range of flower types from a range of families is the best for facilitating a diversity of bees.

Large carpenter bees, Xylocopa spp., are very conspicuous in my garden. My yard is fenced with ratty looking cedar boards serving as habitat for countless Xylocopa nests. The boards are only about 3/4" thick, but the large bees somehow create vertical nests within the boards without breaching the surface. I think this is incredible, and I have no idea how they can detect the outside edge of the wood.
Foxgloves, native to this part of Oregon, grow in my garden. Carpenter bees have no idea how to get in, so instead they just bite holes at the top. Even then, they are not very attractive to most of the bees in my garden.
Wood spurge, Euphorbia amygdaloides, was surprisingly attractive to some pollinators in my garden. Carpenter bees, beetles, flies, and even paper wasps were attractive to the odd musky smelling flowers. Unlike most flowers visited by bees, euphorbia flowers don't produce nectar. For the species that do produce nectar, it is secreted from bracts below the actual flowers, sometimes appearing like petals or sepals which are absent from all euphorbias.
Speaking of bizarre, did you know that some hymenopterans have both male and female characteristics? This is called gynandromorphism. Sexual dimorphism, present in the Hymenoptera, is where sexes of the same species exhibit differing characteristics beyond their genitalia (i.e. scopae, not found on male bees). I stumbled upon one or possibly two Xylocopa gynandromorphs in my garden.
I took photos of the carpenter bee, found in the morning before it had warmed up enough to fly, and hadn't realized it might be a gynandromorph until looking at the photos later. It was a mosaic gynandromorph, only having patches of male characteristics rather than being a bilateral gynandromorph (literally half male and half female). Web searches revealed that gynandromorphism isn't unheard of in Xylocopa, but maybe not all that common either.
After sharing the images of my Xylocopa gynandromorph on social media, I felt regretful for not having captured the insect. Returning home, I immediately went to my garden, net in hand, and watched as the carpenter bees foraged for resources and males chasing each other off. I captured and released a few males and one large female. I was about to give up when I saw a peculiar individual. I netted it exiting a nest tunnel, and sure enough it was a mosaic gynandromorph. It was an intermediate size between a typical male and female, and had scopae on both legs. It appeared to be provisioning a nest, so perhaps it was also fertile. Gynandromorphs are generally considered to be infertile. The specimen has been vouchered, and I am interested in donating it to a museum.