The family Apidae contains the most well known bees, the honey bees, as well as bumblebees, carpenter bees, and a variety of other types of bees with interesting and diverse lifestyles. There are seven families of bees in the world (six found in the United States, the seventh is endemic to Australia), and of these, the Apidae is the most familiar. The Apidae vary greatly in size, appearance, biology, and lifestyle. The scope of this article is to introduce the reader to a few of the bees in this family found in Southern Oregon. Though the species highlighted here were all found in Oregon, they are representative of apid bees found throughout the country.
Bees and wasps share a common ancestor. Bees diverged from wasps at least 130 million years ago, probably sometime in the Cretaceous. Wasps at that time were predatory, and were likely found around flowers to hunt for prey. Flowers were already producing protein rich pollen for other pollinators such as flies and beetles, with nectar-like secretions appearing in the Late Cretaceous. It is theorized that in some cases wasps started feeding on pollen as well as their insect prey, and the diets of some evolved to depend solely on pollen. Wasps, like modern wasps, have hair on their bodies, but bees developed branched hairs which are more efficient at holding pollen. This is the main feature that separates wasps from bees. Diet alone is not a reliable method of separating wasps from bees. South American vulture bees (Trigona crassipes, T. necrophaga, and T. hypogea) are members of the Apidae, and feed on carrion rather than pollen. Conversely, pollen wasps (Masarinae) are vespid wasps which provision nests with pollen rather than insects for their young. The eusocial members of the Apidae represent the most highly evolved of all bees and perhaps all wasps as well.
The genus Apis contains seven recognized species, including the giant honey bee (A. dorsata), the Asian honey bee (A. cerana), and the Western honey bee (A. mellifera). The Western honey bee has around 25 recognized subspecies, often referred to as races among beekeepers. In the US, only a handful of races are introduced, such as the Italian (A. m. ligustica), Carniolan (A. m. carnica), and Caucasian (A. m. caucasia) to name a few. The African subspecies, A. m. scutellata, has hybridized with many of the naturalized Eurasian subspecies, creating the Africanized bees which are restricted mostly to the southern states, limited by cold weather. Africanized bees have traits which help it counter one of the most important of honey bee pests, the varroa mite (Varroa destructor), and may help ensure the economic success of beekeepers in the South who suffer large winter losses from mite infestations.
Honey bees, as well as all other bees and wasps, have mandibles used for chewing and various other species specific tasks, and a proboscis. The proboscis, the bee equivalent of a tongue, is an assemblage of parts which form the sucking apparatus used to gather nectar or other fluids. The longest part of the proboscis is called the glossa, and it often has specialized hairs at the end. Some bees, such as certain osmiine bees (Megachilidae) have special curved hairs on the glossa used to collect pollen on certain host plants such as those in the Boraginaceae with concealed anthers.
Honey bees, bumble bees, orchid bees, and stingless bees have corbiculae, or pollen baskets, which are specialized pollen collecting structures on the tibia of the hind legs of females. The outer hairs are long and curved inwards, while short soft hairs fill the interior. Pollen is mixed with bee saliva or nectar then packed tightly into the corbiculae. This is in contrast to most other pollen-collecting bees which collect pollen in a dry state in long dense straight hair clusters called scopae.
The honey bee sting, like the stings of all stinging wasps and bees, evolved from an ovipositor way back in the evolutionary timeline. Ancient female wasps (and many modern parasitoid wasps) laid eggs through the ovipositor. The rise of eusociality is thought to have correlated with the evolution of the sting, and venom, as a means of defense. The possession of a sting and venom may also have enabled wasps and bees to gather resources or hunt for prey out in the open, whereas many parasitoid wasps are relatively obscure and not often seen. The bright colors of many stinging wasps and bees is simultaneously an aposematic defense, a form of Müllerian mimicry (where distantly related species evolve to resemble each other), and in some cases, an example of Batesian mimicry (where generally harmless species resemble other not-so-harmless species). 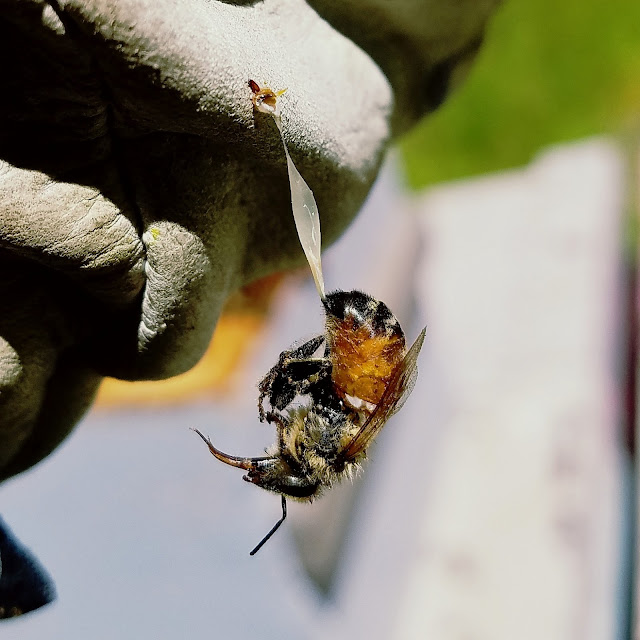 Bumble bees are also very different from honey bees in that they do not communicate the locations of resources of resources as honey bees do (i.e. the waggle dance, a tool honey bees use to communicate the location of favorable flower patches relative to the sun). This lack of communication in bumble bee nests is useful for the use of bumble bees in agricultural settings, particularly greenhouses. While honey bees will forsake a target crop if a more preferred nectar/pollen resource is discovered beyond the farm, bumble bee foragers are all on their own to discover resources. Honey bees may ignore a target crop altogether by means of their communication with other foragers, but bumbles will not. This makes them ideal for greenhouse pollination efforts.
Bumble bees are adventurers. In my observations they have the most diverse collective palate of any native pollinator. In six years I have not witnessed a single pollinator visiting Klamath weed, Hypericum perforatum, which is a nonnative species from Europe, except for the bee in the above photo. This is just a single example of their dynamic ability of at least some species to adapt to changing conditions.
Most bumble bees are easily identified by observing which colors are on each tergite, the segments on the top side of the abdomen. In general they are easier for beginners to identify than other native bees due to their relative abundance and larger size. However, a few factors can complicate identification. Natural variability within the same species can occasionally give the impression to the observer that there are more species than the reality. Queens, workers, and males often have different patterns as well. For example, Bombus vandykei males can sometimes be completely yellow while queens and workers have a metasoma that is nearly all black except for a singe yellow band. B. vandykei and B. vosnasenskii females differ solely by the position of a single yellow band being one terga higher in the case of the former, an example of the importance of accurate observations. For most bees, a close look via good photos or an insect net and a hand lens are necessary for accurate identification. Some species are beyond the ability of the enthusiast, and require an expert with a microscope.
There are several bumble bee mimics in the region, mostly flies. Robber flies (Asilidae) and tachinid flies (Tachinidae) are the most common of the fly mimics. Not all of them are mimics of bumble bees, but several species bear a strong resemblance. Laphria spp., as well as other robber flies, are predatory and hunt other flying insects, including bees and other robber flies. Tachinid flies are parasitoids, their larvae feed on insect hosts and hosts in other orders including some arachnids (though hosts are species specific).
Often misidentified by lay observers for bumble bees, carpenter bees are common and conspicuous. They are the largest bees in Oregon, though unlike bumble bees they are solitary or occasionally primitively eusocial. Not only are large carpenter bees the largest bees in Oregon and much of the United States, but they also have some of the largest eggs of all insects, measuring over half an inch in length, though egg size is probably variable between species.

Are there more? Absolutely! There are over 1,000 species in fifty genera in North America, and well over 5,000 species worldwide in at least 200 genera. That is a lot of bees. So, when someone mentions bees it might be prudent to ask them to be more specific. The word bee is used colloquially to talk about honey bees, which do not accurately represent the family as a whole but are rather more of an oddity. Not to say that honey bees shouldn't be appreciated, but rather I think one should appreciate them for how they serve us and what they represent evolutionarily as the most advanced of all bees. I don't mean to say they are better than other bees, just different. I love all bees, and I think you should too. That is my message. (And wasps, now read this.)

(Photos taken with my trusty Nikon COOLPIX B700 and Samsung Galaxy S7 Edge. Some photos taken with the S7 through the eyepiece of a dissection microscope courtesy Old Sol Enterprises)
at 10:39 PM