Thoughts on Rabbitbrush and Other Things 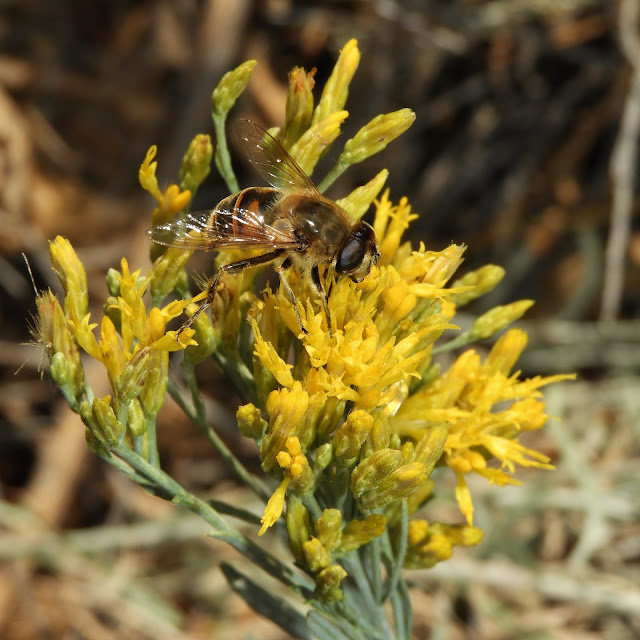 I’ve recently been jonesing to get out and observe rabbitbrush out in the wild and photograph the pollinators that come to visit its flowers. It’s an interesting plant, and one of the latest natives to bloom in dry rocky sites in the Rogue Valley. Rabbitbrush (Ericameria nauseosa) is a grey-greenish shrub in the sunflower family (Asteraceae) with smallish yellow florets born in a panicle and bearing no resemblance to sunflowers or daisies. The plants are prodigious nectar producers, and attract a wide range of pollinators throughout their range, often attracting any and all of whatever pollinators are still active in the area at the time. So I was on a hunt to find these plants and get my fix. Being short on time, I went somewhere not too far from where I live, out past Emigrant Lake in Ashland. I saw a few of the shrubs on the side of the road, but curiosity and the urge to explore took the wheel and I kept driving way out past the lake to wherever Oregon Route 66 would take me.
I pulled over at a small turnout where I saw a fair amount of rabbitbrush in bloom and proceeded to observe. The plants like to grow in places that seem inhospitable to many other plants, such as on the sides of rocky bluffs or, in this case, on the steep slope on the downward side of the road. I slid several times, my shoes and socks filling with gravel and dirt, but fortunately stopped myself from cascading down the bank, the bottom of which was far out of reach.
Last year I had photographed a variety of wasps and honeybees on rabbitbrush blooming along Emigrant Lake, but out in the hills, miles and miles out on OR-66, mostly syrphids (Eristalis spp.) and tachinid flies (Paradejeania sp. and others) were to be seen visiting the flowers. A single thread-wasted wasp and a couple small sweat bees were the exceptions. Bald faced hornets were hovering around the bushes, probably seeking an unfortunate insect of sorts to bring back to the nest, and having no interest in the flowers themselves.
I moved on, my yearning to explore now taking full control of the situation, this time diverging onto a gravel road with a sign that read Hobart Buff Trailhead. I was entering the Cascade-Siskiyou National Monument. Why not? I know nothing of this particular place, yet I have wanderlust like a bird has feathers so it wasn’t even a question as to whether or not I should try it out. But I was also looking for flowers, a futile goal since by late August most of the native wildflowers are spent and most of the native pollinators won’t be seen again until next year. Why should I grasp for something that I just know isn’t there, I wondered? Surely there are other reasons to go on a hike, such as health, spontaneous experience, fun, et cetera.
I stopped midway somewhere on the gravel road between the 66 and the trailhead to investigate some flowers in bloom. Weeds, nonnatives, were the predominant plants in this clearing. A white flowered Centaurea was the most prolific, and although the sun was shifting ever closer down towards the horizon there were still bumblebees on the flowers, as well as a small assortment of flies.
Upon arriving at the trailhead, I was greeted by a peculiar hissing sound coming from behind my truck. I was thrilled to discover the rough road had torn a small hole in my tire. After gleefully replacing the leaking tire for my spare (I was not excited about the thought of waiting until after I'd hiked to change it), I was off on my merry way down the trail, camera and walking stick in hand. 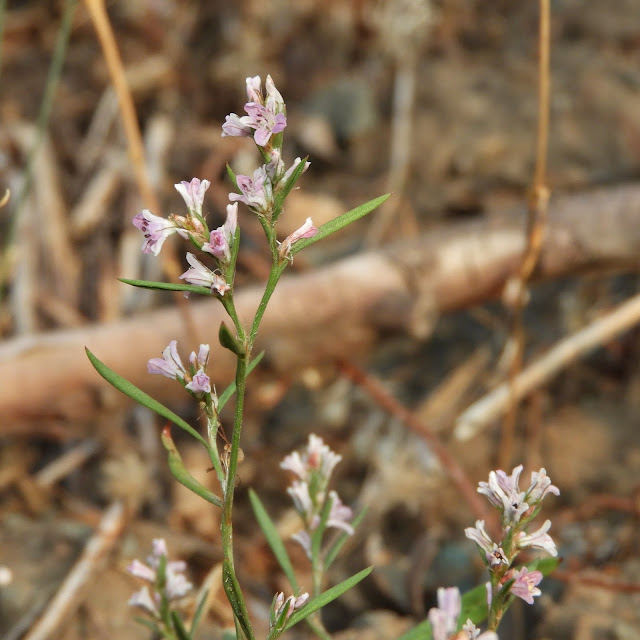 Despite my initial disappointment beauty and delectation were there to be found. There was practically nothing in bloom on the trail, except for one tiny tiny species with minuscule flowers, hugging the ground and ready to be completely unnoticed by any reasonable hikers. What were once wildflowers a month or two ago were now crispy dry remnants with ripening seeds or already dispersed seeds apparent by open and empty seed capsules. 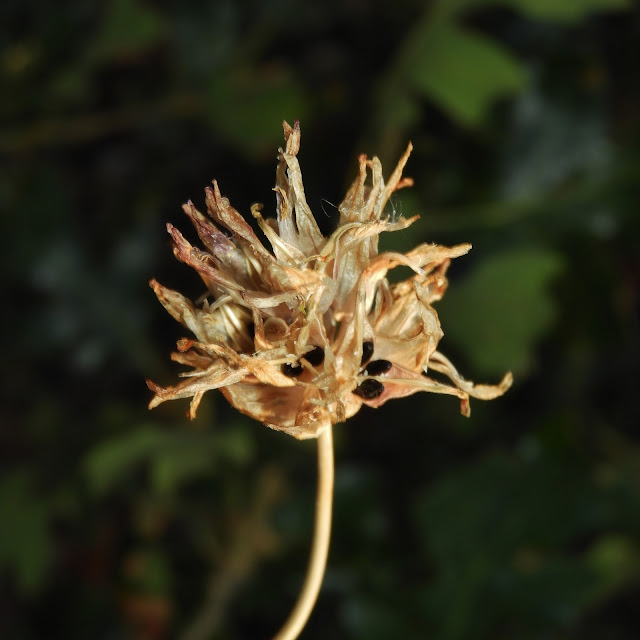 The maturation of seeds and seed dispersal facilitated by uniquely evolved seed carrying structures is of great importance. Incidentally, seeds and seed capsules are quite interesting. Plant life, as well as plant death at the end of an annual cycle, is beautiful. 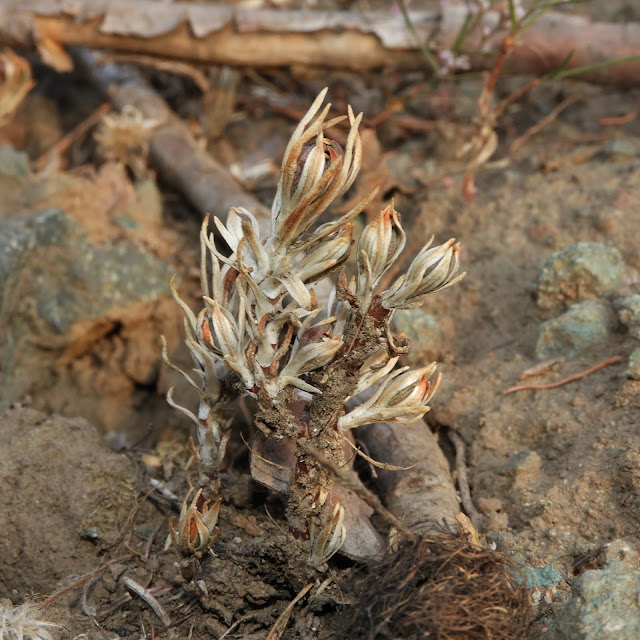 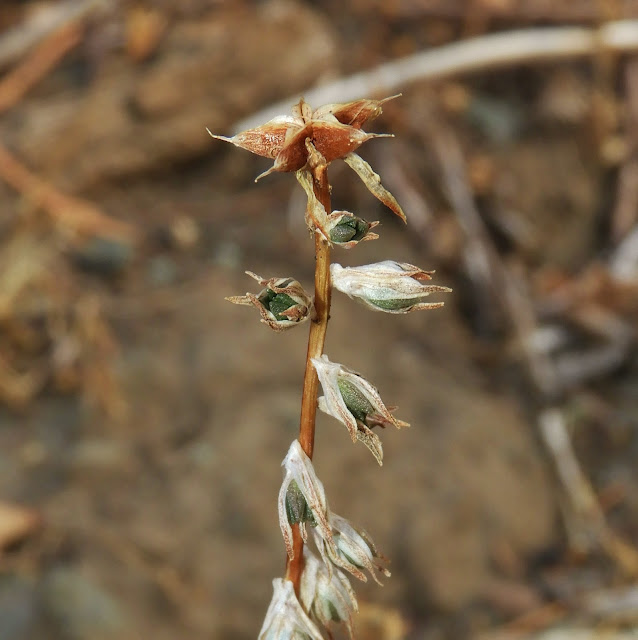 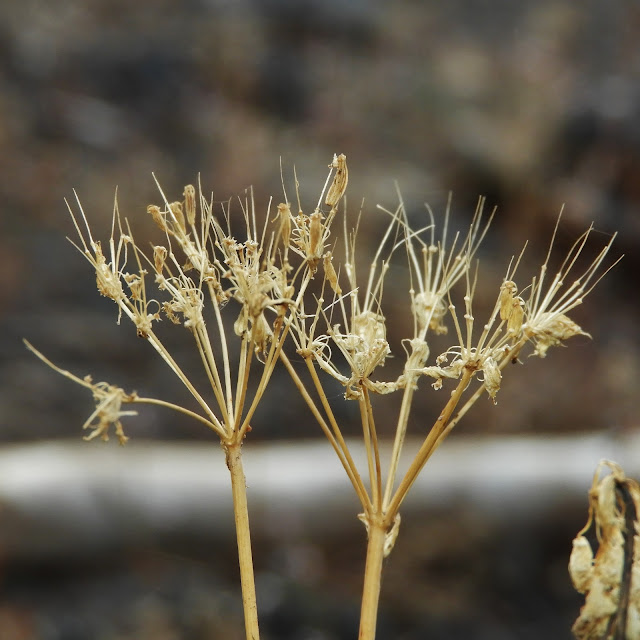 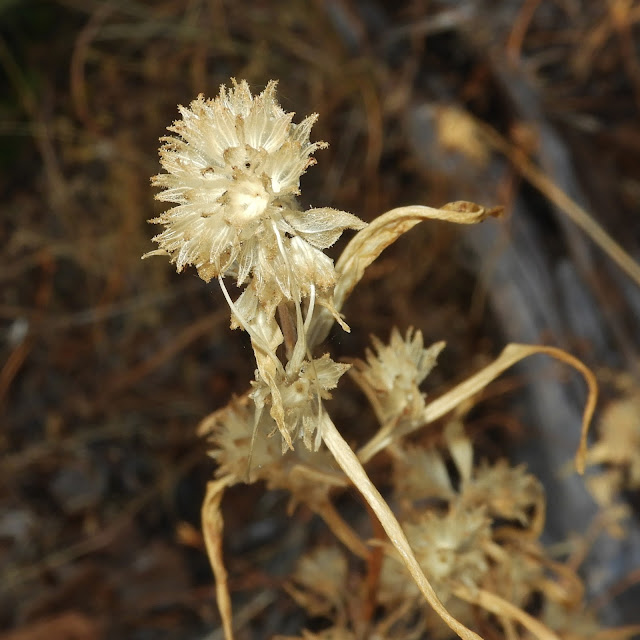 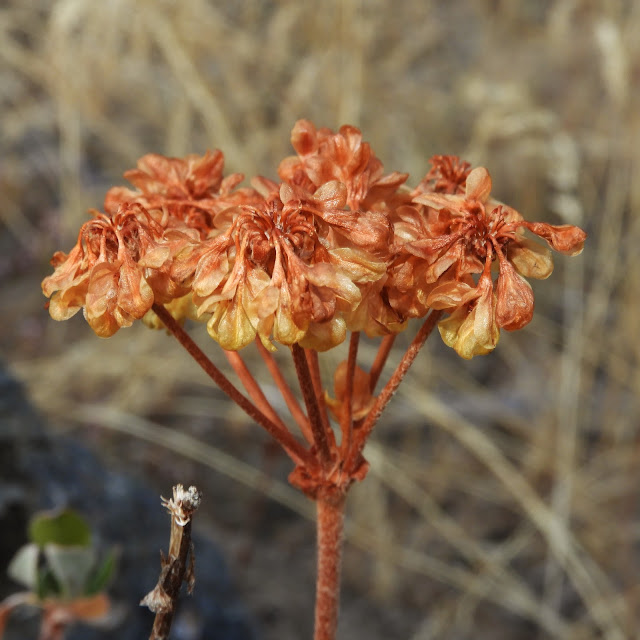 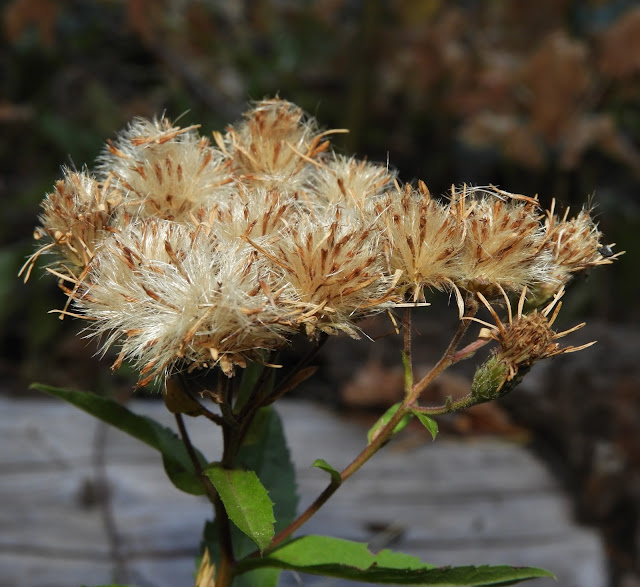 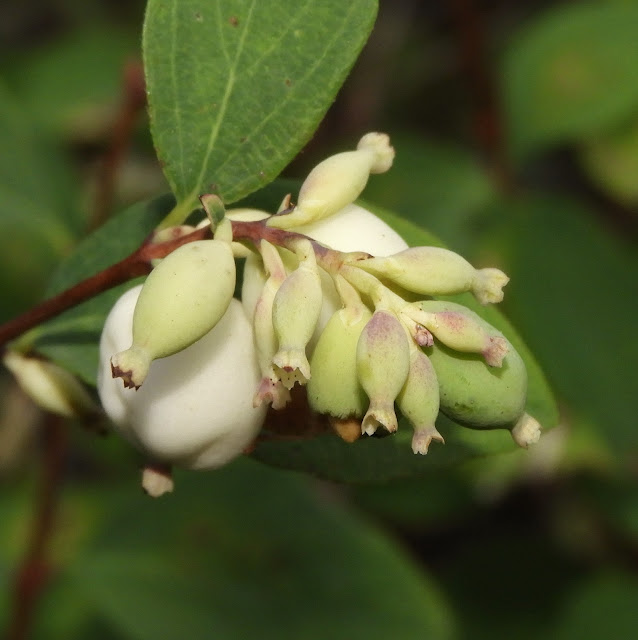 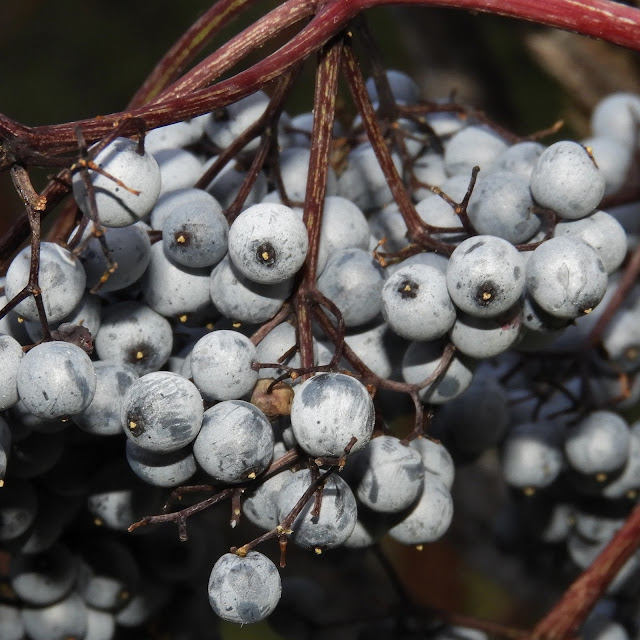 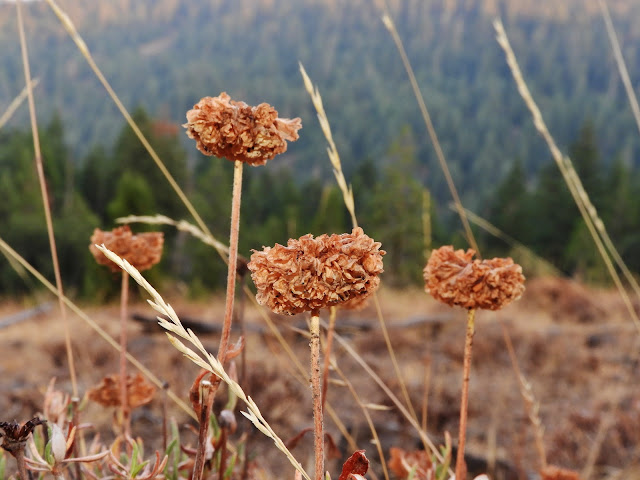 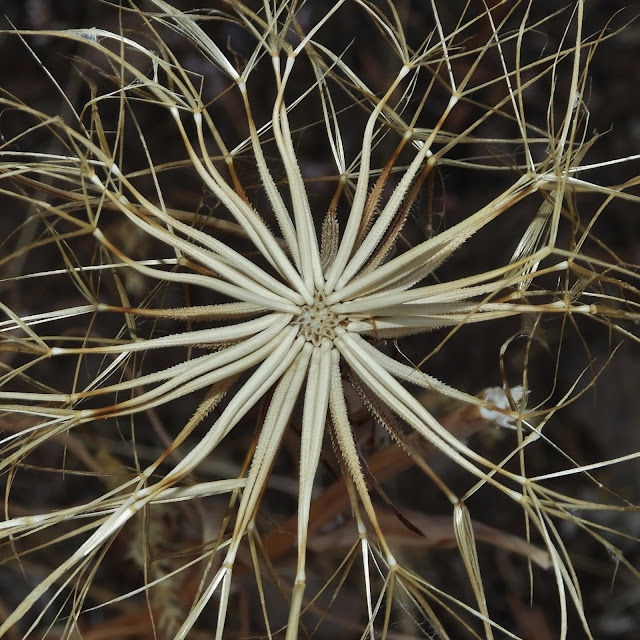 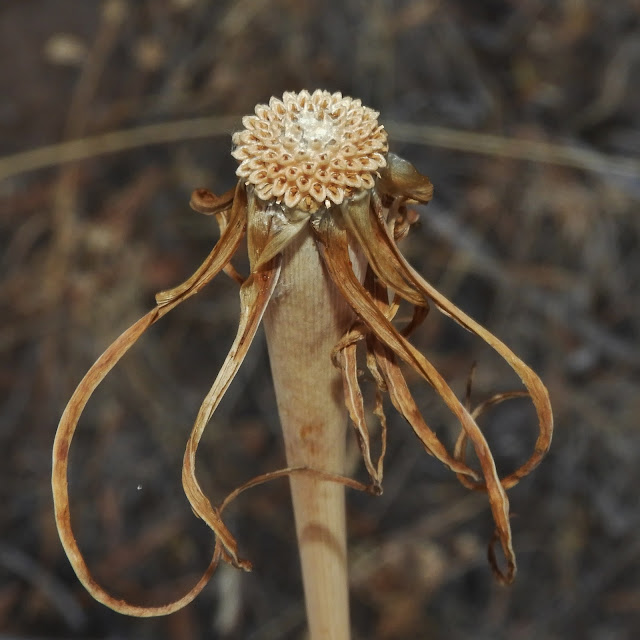 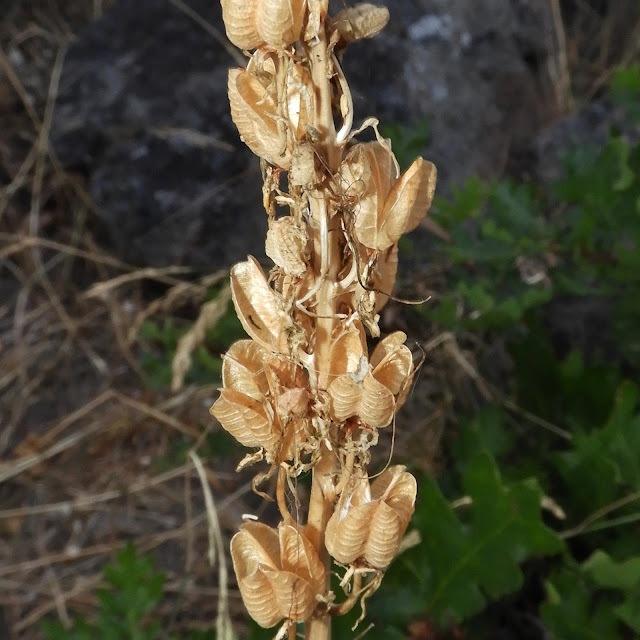 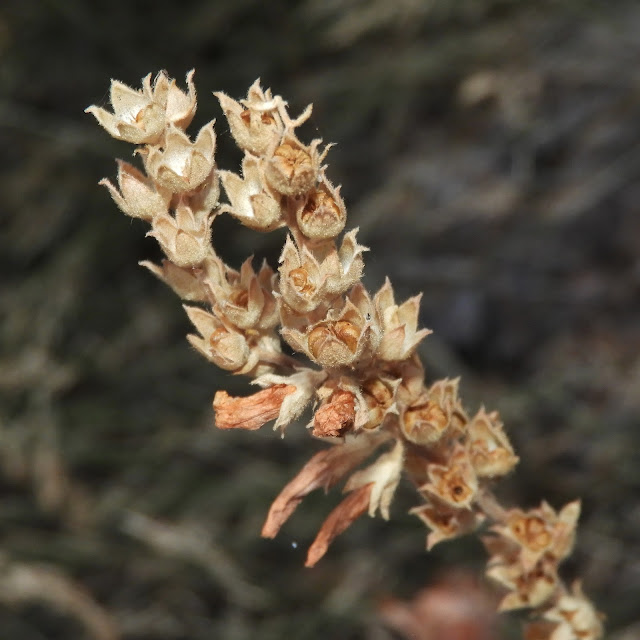 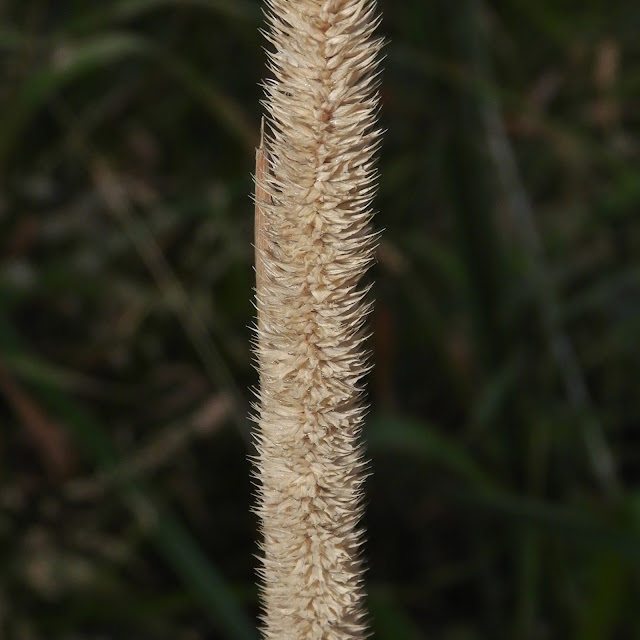 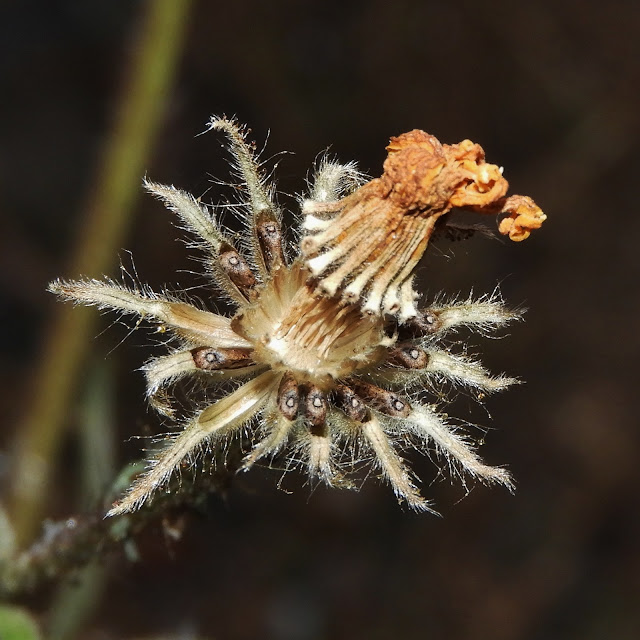 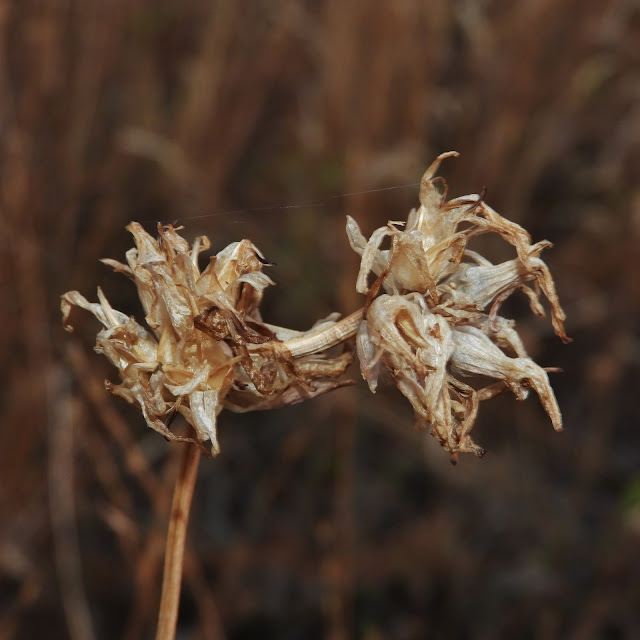 I was pleased with what I had seen, though I had to shift my goal from finding flowers and pollinators to finding other beauty. I enjoyed challenging myself to find other things to appreciate, a task often easier said than done in my experience. My mind was unsettled, and thoughts drifted to a region of my mind neither pleasant nor unpleasant. 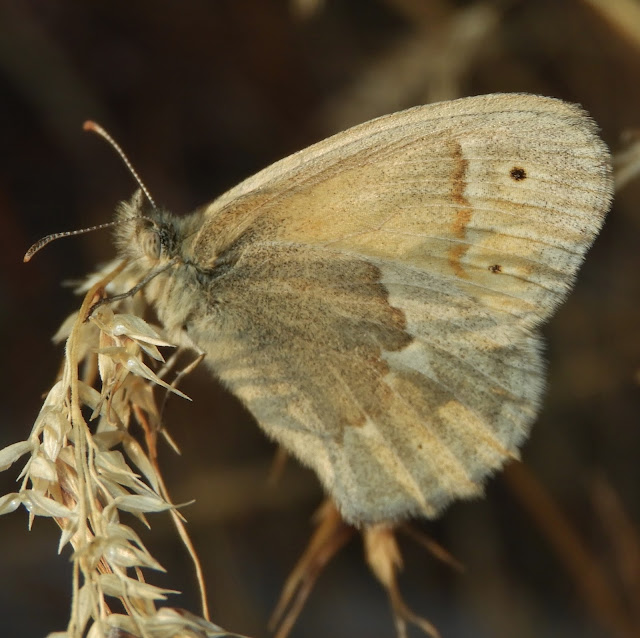 I have been reading a lot of the works of Albert Camus this year, philosopher and author from the first half of the 20th century. He was considered an existentialist, with some similar themes as found in the works of Nietzsche, Kierkegaard, and Sartre. Most recently, and perhaps appropriately in the midst of the thick isolating smoke we have experienced this summer up to the last week or so, I have been reading The Plague. In this book Camus depicts a plague stricken township completely from the outside world via a strict quarantine. The epidemic lasts for a very long time, around a year if I understood correctly, and is dubbed "a long period of exile" by the narrator. Whether one tried to escape the city, an analogy to trying to escape death, or attempts to aid in some way such as taking care of the ill or any other noble cause, all are on the same figurative boat and will all face the same fate, be it from the bubonic plague or any other cause. In Camus' view, even though taking the noble route resulted in the same as any other route, it was still worthwhile and thus meaningful. This is what I thought about during the hike. 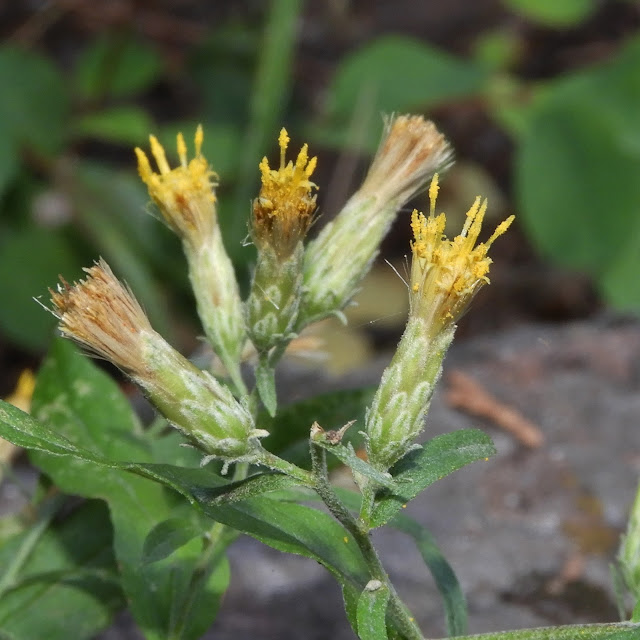 I agree with Camus in that everything is only temporary, be it anything deemed good or bad in life, exemplified by flowers and the short lives of bees and other pollinators. I don't think bees care about flowers or their survival. This doesn't mean they don't need flowers. In this way we aren't that different. We have needs of various sorts but often don't care about them unless we choose to. I believe everything comes down to choice. I am also a relativist and believe much of our choices are biased, subconsciously tainted from our families, experiences, cultures, et cetera. How much is nature and how much is nurture is uncertain, and I don't know if there would be a way to test this without bias. 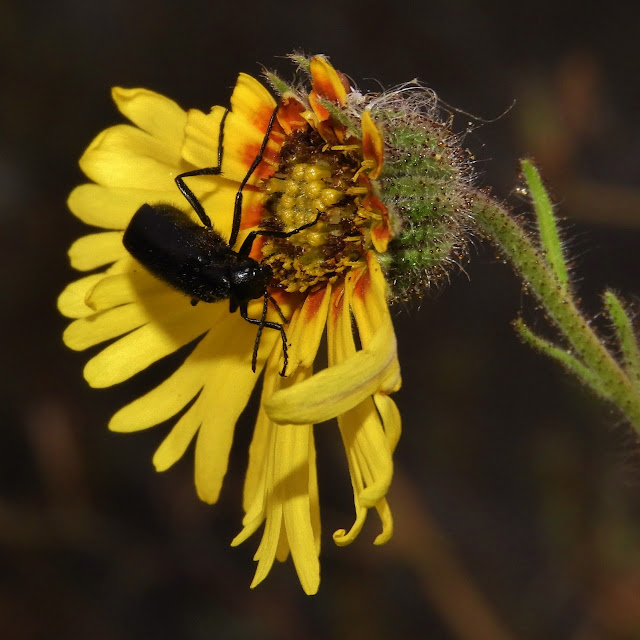 One thing that draws me to flowers and pollinators is that they just do without wondering if it is right. Their actions (not choices, I am hesitant to believe flowers or pollinators have free will) are purely for survival, and fitness, and not about contemplating their lives. They have an advantage, not burdened by choice. But with choice comes great power, great opportunity. But is this a good thing? I am sometimes inclined to think not, for reasons that are far too many. But hey, look at these photos of blister beetles eating the flowers of Madia elegans! 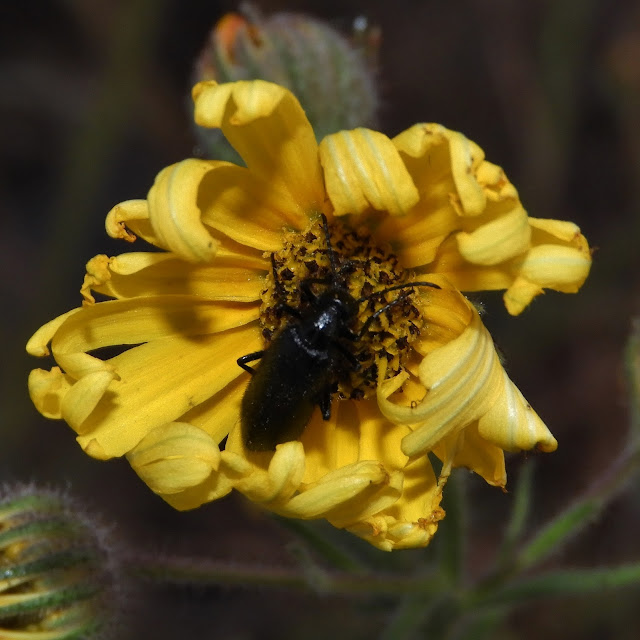 Madia elegans is one of y favorite native plants. They are peculiar. The flowers open at dusk close in the morning. The entire plant is covered in sticky, resinous hairs that simultaneously reduce desiccation from the sun and trap small insects that may cause the plants harm. And they grow like weeds, in the best possible way. 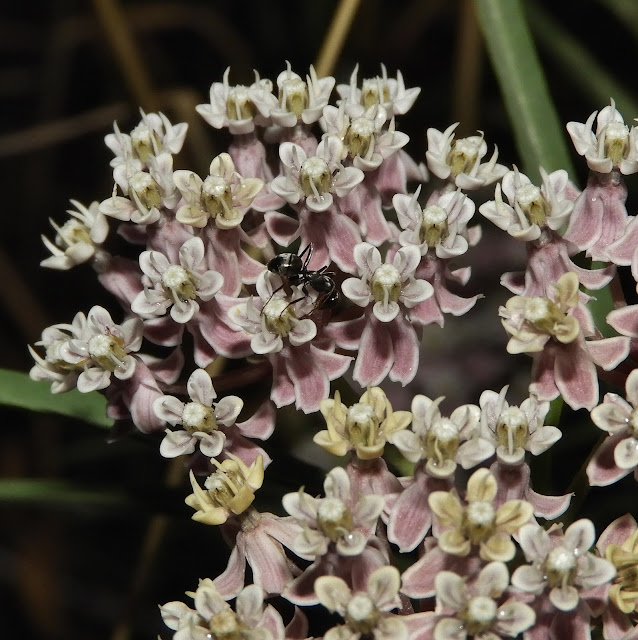 Life has me trapped in a continuous cycle of sleeping, eating, and earning money to redeem for basic survival needs. Life is not always pleasant, and it is not always a choice to think otherwise. I choose to embrace nature in any way that is within my power, because it brings me deep satisfaction. I don't know if I'll ever make a difference beyond my own life, but really this shouldn't matter. We should choose to be happy for our own sake, because doing otherwise is absurd. Enjoy each day, even if it's for small simple pleasures, like a sunset. I live a life free from many of the horrors many people on this earth experience on a daily basis. If I don't appreciate that, then I am truly living in absurdity and life really is meaningless. 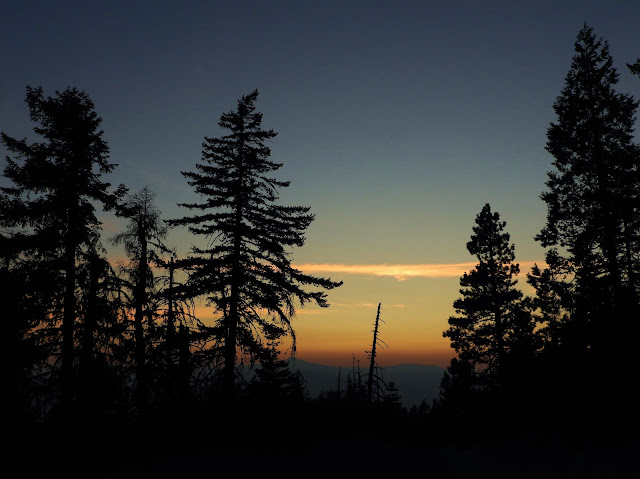