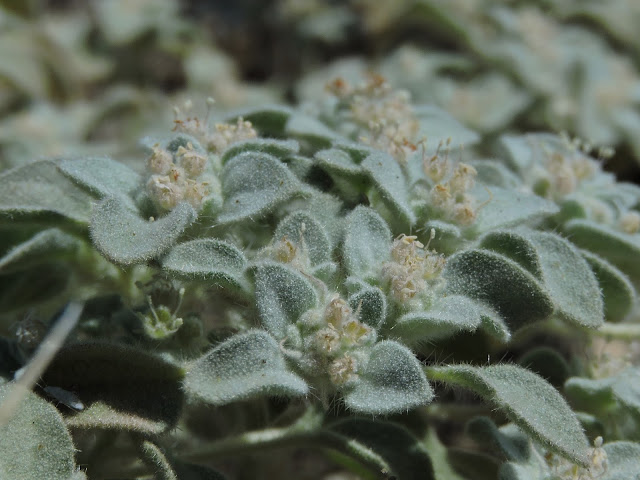 Croton setigerus Hook. (syn. Eremocarpus setigerus (Hook.) Benth.), alternatively known as turkey mullein or dove weed, is a small annual plant native to dry regions of the Western US. They grow between four and twelve inches tall, something that may vary regionally, and have various leaf sizes between individuals. The seeds are eaten and distributed by wild turkeys and doves, thus the common names. Male flowers are tiny, appearing in clusters at the ends of branches.

Female flowers are often singular or in small groups and grow out of the axils of the upper branches. The female flowers are basic, consisting of only a carpel which has a single exerted style. The entire plant is covered in dense unbranched hairs that appear soft but are mildly rough, and can be irritating to the skin. 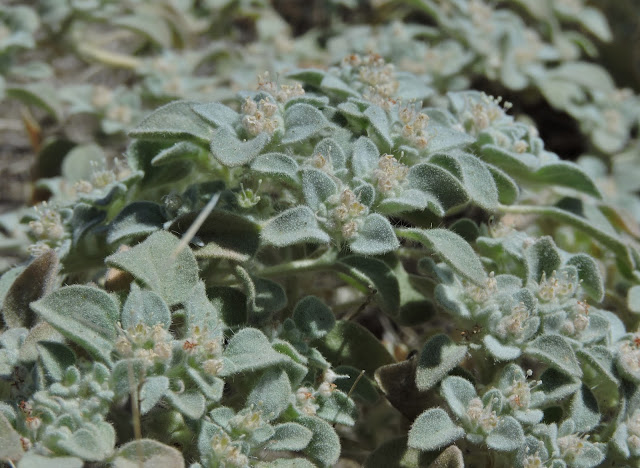 Croton setigerus is a member of the Euphorbiaceae (subfamily Crotonoideae), or spurge family, and has similarly toxic attributes. Though not strongly toxic to humans, ingesting any part of the plant is not recommended. If eaten by livestock, the plants form indigestible masses in the gut called phytobezoars which can become life threatening and require surgical removal. 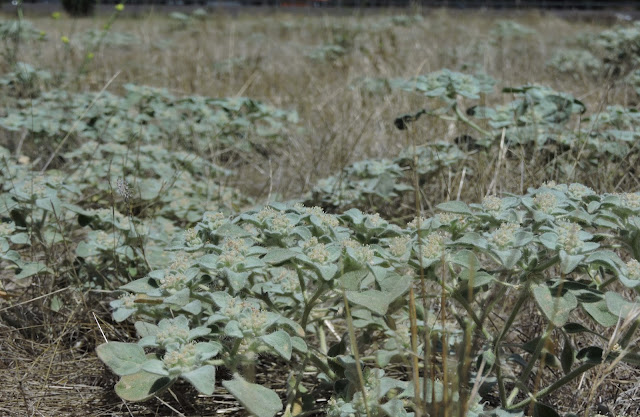 Diterpenes found in the plant, particularly the chemical eremone, are reputed to stun fish. For this reason the crushed plants were used to kill or stupefy fish in shallow water by some Native American tribes such as the Klamath and the Paiute tribes. The crushed leaves and stem were sometimes used in conjunction with Chlorogalum pomeridianum and Trichostema lanceolatum for this purpose. 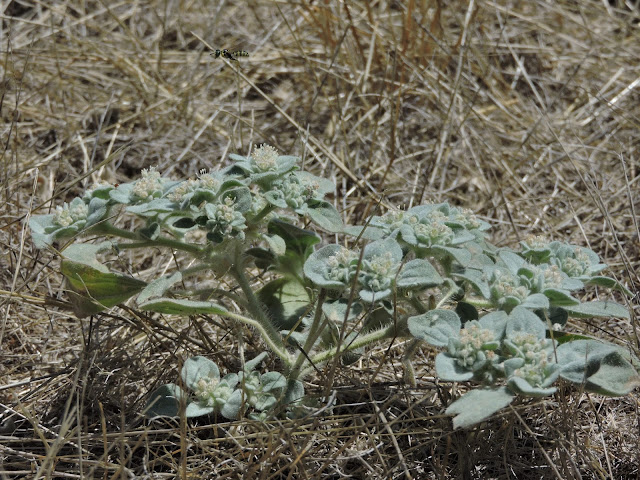 There are native and nonnative pollinators that are more than willing to visit Croton setigerus, seemingly for both pollen and nectar. I'm not quite certain how the pollen is transferred to the stigma, there is little incentive for bees or other pollinators to visit the stripped down female flowers hidden beneath the top layer of foliage. Perhaps it simply falls down when pollinator activity dislodges it from the anthers, or maybe wind has a role to play.

An issue of the American Bee Journal from 1915 as well as a handful of other early 1900s publications note Croton setigerus as an important nectar source for fall buildup after the honey harvest, claimed to produce a "thick amber honey." I was ready to proclaim that honeybees, at least the ones here, do not visit Croton. Clearly this would have been in error as I have caught one in the act on a plant near one of our apiaries. It was, however, just a single honeybee in an area with a few thousand individual specimens of C. setigerus, so this would indicate that it is pretty low on their list of favorable flora. I would expect that there must be a dearth to push them towards visiting such a plant en masse.

Judging from the behavior of the bee and lack of pollen in her corbicula I would conclude she was collecting nectar. However, if visitation remains very low, then this will yield little influence as a honey plant. Over 20,000 foragers are required to produce a pound of honey, but keep in mind that some of that honey is consumed by those same bees, so the number is probably much higher.

Halictus ligatus is one such native bee that I have watched visit Croton setigerus on more than a few occasions. The bees use their proboscis to probe the small male flowers and in the process of doing so coat themselves in pollen. Perhaps there is no nectar to speak of, and they are simply duped into thinking so and thus attempt many flowers, but I am sure there is something they are able to attain from these flowers such as an oil or something like nectar if not the real deal. Either way, pollen is an important component to the survival of most bees, being their sole source of protein.


Halictus ligatus is a ground nesting species native over a wide range from Northern Mexico (and possibly further south) and through most of the US states, north into the Eastern Canadian provinces. They are active for most of the year, possibly raising multiple generations per growing season, and visit a wide variety of plants from many families. For these reasons they are probably a very economically important species and are likely to have a big hand in crop pollination where there is habitat and year long forage, probably less common or nonexistant where monocultivated crops are prevalent.


One of my favorite native hymenopterans, predatory wasps in the genus Philanthus, were foraging for nectar on one of my observations. These wasps are known as beewolves, named after their prey. While there are European species that prey specifically on honeybees, the American beewolves prey mostly on halictid bees which are numerous here, such as Halictus ligatus which was foraging nearby.


The beewolf is heavily armored and resistant to the defensive stings of the bees it is after, and swiftly stings the bee with its own stinger. The venom doesn't kill the bee, but paralyzes it. The bee is then brought to the beewolf nest, a solitary tunnel excavated in mildly sandy soil, and left in a brood chamber for a single egg. The larvae will feed on the bee until it is ready to pupate. Unlike bees, who attain protein for their larvae from pollen, many wasps (with the exclusion of gall wasps and other plant feeders) hunt or parasitize other insects as a protein source for their young.

Philanthus aren't the only wasps I've seen visit Croton setigerus. Thread-waisted wasps (Ammophila sp.) and spider wasps (Pompilidae) were also visiting the small male florets on one day. I did observe a general decrease in pollinator activity when it was hot, over eighty-five degrees Fahrenheit.


Melanoplus devastator, the devastating grasshopper (possibly named for its feeding preferences in agricultural settings, and thus economical impact), was common in this field where I did most of my observations. They were often found on Croton setigerus, leading my imagination to consider them as potential pollinators. Before you dismiss this possibility, however unlikely, consider that there is at least one known orchid which is proven to be pollinated specifically by crickets (same order as grasshoppers, Orthoptera), although this is far away on an island in the Indian Ocean. In my own garden, usually in the evening, I have observed katydid nymphs and adults (also in the order Orthoptera) visiting flowers to feed. Only one grain of pollen is required to produce a single viable seed, so is it impossible that a grasshopper could be a pollinator?