Seeds of Bulbs, and Other Stories

It's the middle of Winter here in SW Oregon. It's cold, wet, and dark. The sun only checks in briefly once every couple of days to check on us. We have had brief encounters with snow, but the typical weather is overcast and drizzling, hovering above freezing most mornings and warming up to a toasty 46°F. As for plants, the most exciting growth is at the tiny seed scale. Seedlings everywhere, in pots and the ground, are germinating now. I grow seeds in two places, protected under my porch under lights with bottom heat, and the rest sunk into a garden bed out in the open. Seeds I know to be hardy and/or requiring the Winter treatment went out in the open, while seeds which I haven't yet been acquainted went under protection. I have had good success with this practice. Below are some of the current (hopefully persistent!) seed germination success stories that I have to tell.

My porch seed starting setup is a basic two-shelf open light rack placed against the wall. I have a heat mat under the top rack (shown). The lower rack is full of marginally hardy second year pots of Kniphofia and Agapanthus and some type of perennial Ranunculus. The former two were started from seed last year while the buttercup was a door prize from the local NARGS chapter I am a member of. These are species which [apparently] do not require a cold period to germinate. The leafy bunch of seedlings in the rear center are Arisaema heterophyllum, the first of the family Araceae that I have attempted, and received happily (by mistake) from the Pacific Bulb Society (PBS) Seed Exchange (SX). There are also a few Alliums in the back right (senescens ssp. montanum and subhirsutum). I'm still waiting for a few pots to show signs of life. For a complete list of all the seeds I have started this year, see this post from September 2015. 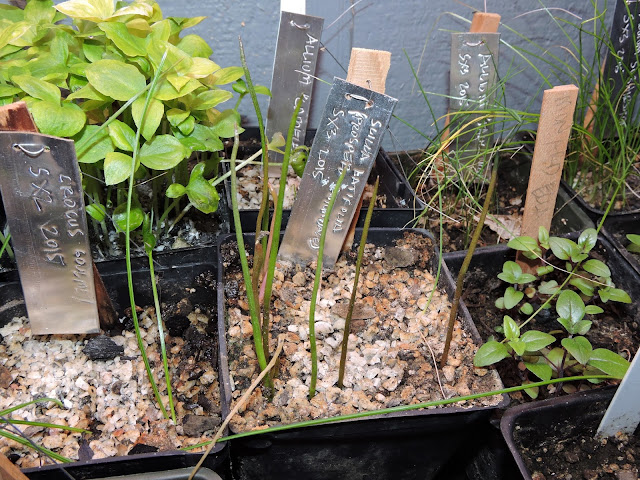 I became greatly confused when researching the identity of what I had received as "Scilla latifolia" from one of the PBS seed exchanges last year. (I wrote a summary of my confusion here, near the bottom of the post.) No matter, they seem to be growing on just fine and not being sure of the name doesn't ruin my enjoyment of a plant. One has apparently been killed by frost, while the others remain. This is an example of the importance of genetic variation, as the ones that do not make it would not have done well as mature adults in my climate, whereas the survivors will be better able to withstand what may be the edge of their limits. If I can ever attain seed from these plants, their offspring will be even better suited to living here. This is the idea behind heirloom seeds and the reason open pollinated plants are better than tissue culture clones or F1 hybrids, in my opinion.

To the left is my pot of Autumn blooming Crocus goulimyi. The seed was planted halfway down the pot, as suggested by Ian Young, and the results are good! This success is because unlike many other bulbous monocots the cotyledon comes out of the seed point-first and is not folded like Allium or Erythronium, which need to be surface sown. It was suggested by Ian Young in one of his Bulb Logs (SRGC) that the location a seed must be sown is determined by its mode of germination. If the leaf is folded it cannot pierce through a thick layer of soil. To be safe, the best course of action is to scatter the seeds onto roughened seed starting medium and stir it in (only the top half-inch) with your finger, then adding a thin layer of grit to keep the medium or seeds from floating, then tamping down and watering in.

Probably better known as Zigadenus fremontii, this species is native to low elevation SW Oregon south to Baja, likely in coastal regions. This was a PBS SX acquisition, and due to the relatively mild climate it is known from I have thus far kept it under protection just to be safe. This is a very toxic species, one of my attempts to grow something that will not be eaten by the local fauna that inhabits my yard and allows me to garden (or shall I say, allows me to prepare lunch). This is an interesting genus, all parts being toxic including the pollen and nectar. I have not seen bees visit the local T. micranthum, yet there are so few individuals that it is not a fair study population. Native bees are suspected to be the pollinators of these plants, and I can't help but wonder if, like caterpillars who feed on toxic plants to become toxic and distasteful themselves, the bee larvae provisioned with pollen and nectar from Toxicoscordion similarly protects them from pests or predators.

One of the Allium selections I had lost to voles last year (painfully reminisce my woes) had fortunately set some seed, and I was able to collect it before the bulbs were ruthlessly devoured. These two (three?) seedlings are the first to appear, and excellent examples of the bent cotyledon I mentioned above. Allium seed leaves (aka cotyledons) are folded inside the seeds and they grow "elbow first" and in return cannot effectively push through a thick layer of topsoil. With Allium, I do not stir in the seeds, but leave them as they fall and cover them with grit before tamping and watering. The tamping is very important because it helps ensure good contact between the medium and the seeds allowing moisture to soften the seed coat facilitating germination. Hopefully I will be able to bring these bulbs to maturity and redistribute them in my garden, this time in vole-resistant cages.

I am growing a few dicots, mostly from the Lamiaceae and Asteraceae. Visible here is lavender, seed collected from plants in my garden. I had collected seed from a variety of the lavenders in my garden, from about six different types, so I'm not sure exactly what I'll get. Just now the true leaves are maturing, quite different from the rounded cotyledons. These will likely be planted in both my garden and in front of my workplace, continuing the project I started last year (read about that project). The tiny seed of lavender, and others in the Lamiaceae, are easily planted by stirring into the top half-inch of the soil. I didn't use grit, but a thin layer would have been useful to keep the tiny seeds from floating.

When this first germinated, it looked identical to the Lavendula above. This isn't surprising, both Monardella and Lavendula are members of the Lamiaceae, and like all dicots have the typical rounded cotyledons. But as they mature it becomes clear they are very different. This is a native, unlike the lavender, and is a perfect candidate for xeriscaping as it tolerates both drought and direct sun. It grows in both sun and shade, prostrate in the latter, and flowers reliably. It will be distributed as per the lavender.

Now to the unprotected seed pots, these are seeds from hardy plants that benefit from the freeze/thaw cycles of Winter. This seed of Pseudomuscari azureum was collected from my own plants. Typical of many hardy bulbs I have grown, the first sign of germination is the emergence of a radicle, the embryonic root. It emerges from the seed and dives into the soil. I counted five germinating seeds in this photo with six radicles, how many can you find?

Depending on the genus and species, the bulb is either formed at the tip of the radicle or at the surface by the seed. Seeds which produce the bulb next to the seed at the top of the radicle benefit from a slightly deeper planting to help the tiny bulb achieve depth. Otherwise, contractile roots pull the growing bulb deeper and deeper into the medium over a series of years until the preferred depth is achieved. The perfect depth is dependent on a variety of local conditions, and thus it is always best to err on the shallow side when planting bulbs rather than deeper as they cannot fix themselves if planted too deep, and will likely perish.

One of the easiest bulbs for me ever, this species has been with me for years now. Just last year, many were decimated by voles, but I was able to collect seed first. Many are germinating, and they are easy to germinate. This species does not need a freeze/thaw cycle to germinate, and will probably germinate at any point in the year (though I planted these late). I had donated a lot of these seeds to the PBS SX last year, I wonder if the recipients of those seeds are having the same high level of success as I am. If you are one of the ones to acquire this seed, I'd like to hear from you!

A native Iris, I had read that they are notorious for low germ rates. I see no evidence of low germ rates, there are at least nine radicles visible in this closeup! This is great news for me, I am going to plant these at my work and get some more native plants into that industrial hardscape whether they like it or not (...but of course they like it). Along with the Allium seed above, I had donated a lot of these to the BS SX and I would like to hear from you if you were a recipient of this seed.

Now here are some non-seed related photos, just for the hell of it: