Autumn is finally starting to not feel like Summer here in southwestern Oregon! Nights have been dipping into the low 40's F with daytime temps averaging in the 60's F. Rain from a week ago moistened the earth which has remained damp to this day, with rain predicted for tomorrow. I am loving it. I have always preferred cooler temperatures as they allow for a greater expense of my energy in the outdoors with much less fatigue and a sharper mind. The downside is in the interim season once known as "fall of the leaf" there are few flowers. Disappointment dissolves when other features of the landscape become the focus.﻿﻿﻿﻿﻿﻿

Ponderosa pine trees alongside Douglas fir are the dominant trees, dwarfing and outnumbering the oaks and madrone trees, the dominant broadleaved giants. The cones of ponderosa pines can be identified by the spikes on the bracts as well as the size, between two and six inches in length. Each bract conceals two winged seeds, but fallen cones are often devoid of the seeds from either wind or animals. Admittedly this would depend on how many birds and animals inhabit the tree's locality, my trees situated within a mixed-coniferous woodland thus a lot of wildlife.

Ponderosa pine needles are the longest in this area of any conifer (that I know of), reaching a length of nine inches. They tend to grow in clusters at branch ends giving the trees a characteristic pom-pom silhouette differing in that of Douglas fir which is more reminiscent of a candelabrum at the crown (see last two images). The individual needles in this pine are normally in bunches of three, occasionally two, and very sharp at the tips. I used to lack an appreciation for the coarse nature of the true pines (genus Pinus) but have since recognized their beauty which lies in the details, something to do with all plants and likely all life (and non-life, theoretically).

I am somewhat perplexed by the presence of this tree. It stands somewhere around 100ft. where my driveway meets the road, yet I have not seen any other sequoias anywhere else outside of Palmerton Arboretum, which has one or two of the giants of similar height. It is possible that the trees were planted, maybe less so that they all (or this one) are the last remnants of the once northernmost range of this typically coastal species. I can imagine that if they did at one time grow wild here, they would have promptly been decimated by the arrival of the settlers who would have needed the best lumber for all of their needs (wood made nearly everything for those people).

Unlike pine trees and similar conifers (besides true cedars and a few others), sequoias do not have needles but instead possess spirally-arranged scale-like leaves. A few obligatory facts: sequoias are the oldest living things on Earth, the eldest living tree somewhere around 2,500 years old and 275ft in height. Their girth is also unmatched, the largest over 150ft in circumference at the base of the tree! Small yellow pollen-producing male cones are produced at branch tips between December and May. The female flowers are in the form of small greenish cones that mature some time in Spring. Like all coniferous gymnosperms, sequoias are wind pollinated. After pollination seeds are slow to dehisce, cones sometimes remaining green for many years before drying out and shrinking enough for seeds to fall freely. Other times insect damage or fire are required for the seeds to fall.

The rain and cool temperatures has kicked off the mushroom season. Of course there may be mushrooms year round in certain places, but here they tend to only appear when there is water thus they are mostly produced in the wet season. Mushrooms are generally a good sign when they appear out of soil or much, less so when they are growing out of a living tree signaling rot. Although fungus produce mushrooms and other structures as a form of reproduction, the actual fungus body is underground composed of mycelia, a fine web of cell-thick filaments called hyphae. A single spore from a mushroom lands in a suitable location, and the fungus grows underground, radiating outwards as it ages. In some mushroom-producing species, mushrooms are produced on the outer edges and create what people have called "fairy rings." These organisms can reach immense size, though you would never see them. The largest ever discovered has covered 2,200 acres of land, and estimated to be roughly 2,400 years old! It is a parasitic honey fungus (genus Armillaria) in the Blue Mountains here in Oregon. This is the largest organism on Earth, but not the oldest.


I had originally identified this as the oak fern (Gymnocarpium dryopteris), when I found a nice patch that hadn't lost its green (many patches have already gone into dormancy and turned brown). Yet this is indeed the common bracken, Pteridium aquilinum. The differences are hard to ignore, oak fern having leaflets with wavy margins, an overall fine texture, and less prominent veining. I believe the two ferns also like different conditions, bracken being more in favor of dry conditions, or at least more adaptable to them. This is a perennial fern, each frond appears on an individual stalk from the rhizome. Bracken can become a pest in gardens, something I have observed in the garden of Anna's parents, and become difficult to remove once established. There is also evidence that eating the young "fiddleheads" contributes to cancer due to the toxic compound ptaquiloside, presumably found in all parts of the plant. Another interesting thing i have read about bracken is the presence of extra floral nectaries which have been reported as being occasionally (rarely) worked by honeybees. The purpose of the nectaries is to attract ants who will defend the plants from other insect predators.

Ferns and conifers in general are somewhat of a mystery to me, their taxonomy is not in my spectrum of knowledge. Autumn, as the flowers fade, is a good time for me to learn some new skills and gain intimate knowledge of more primitive plant life. Following are a series of photos I took with a special project in mind.

While taking photos of the oak fern, I happened to see deeper in the wood this gangly shrub. Probably in response to the low light from the dense canopy in this northerly exposed slope, these shrubs have formed loose branches with mostly open space between. This is known as the saskatoon serviceberry (the name derived from a Canadian aboriginal word for the plant). They flower in Spring, with edible berries following. I will have to check again in Spring to see if these produce flowers.

Situated next to the serviceberry, I saw this large tree, maybe 30ft in height. With some help from some folks who know more than I, we agreed that it is Cornus nuttallii, Pacific dogwood. I did not see any fruit, clusters red and berry-like, but it is very possible that wildlife have already helped themselves to it. The discovery of this tree was all thanks to my desire to photograph the oak fern, for if I had not stopped by the side of the road to photograph the ferns I would not have seen this tree. Again, I will need to see it in Spring (with my camera, of course).

Prominently displayed at eye level on the trunk (≈6" diameter) of the dogwood, I couldn't miss this large green lichen. Lichen are commonly thought of as being rock dwellers, but they are found on many substrates including woody plants and soil. Lichen is not a single organism, but a composite organism typically composed of the union of an algae living among the filaments of a fungus. The epiphytic Lobaria pulmonaria, sometimes called tree lungwort, consists of a fungus and a green algal partner living together with a cyanobacterium in a symbiotic relationship. The separate organisms that comprise lichen are seldom if ever found living independent of the other(s), except in a laboratory.

Terrestrial lichen and mosses cover the ground in some places. I think of lichen as the coral of the land, though they are almost literally worlds apart. Some corals require another life form in order to gain nutrients, a symbiosis not that different in essence to lichen (but still very very different in every way). Seeing Cladonia (and some of the tree lichens shown below), it is not hard for the imagination to think of coral.


Years ago, my wife Anna asked, "Do oak trees make a fruit?" My first thought was that she was mistaken and had not seen it right, but then one day I had seen them too. They are misleadingly called oak apples, but I would not recommend a taste. They are in fact created by a type of tiny stingless wasp galled a gall wasp. They are harmless to both humans and the trees, as they do not possess stingers and they are not parasitic. The gall is formed after an egg is laid on the developing leaf buds, secretions instigating the formation of a gall which the developing larvae lives inside until it is mature and finds its way out. The adults do not live for very long, maybe a matter of weeks, so their primary task is mating and laying eggs. They do not eat, thus are not pollinators. They do, however, act as a food source in all stages of life to larger creatures including birds, so their presence is beneficial in that way. (See the rose gall, another type of gall wasp, here.)

Below is a series of photos taken from a single fallen stick of an oak tree, less than two feet long. This shows how the oaks are not only host to insect life, but a wide variety of epiphytes; a canopy ecosystem composed of countless organisms: 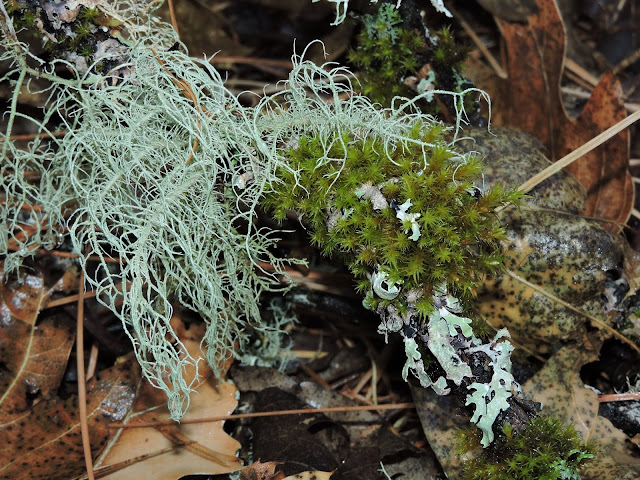 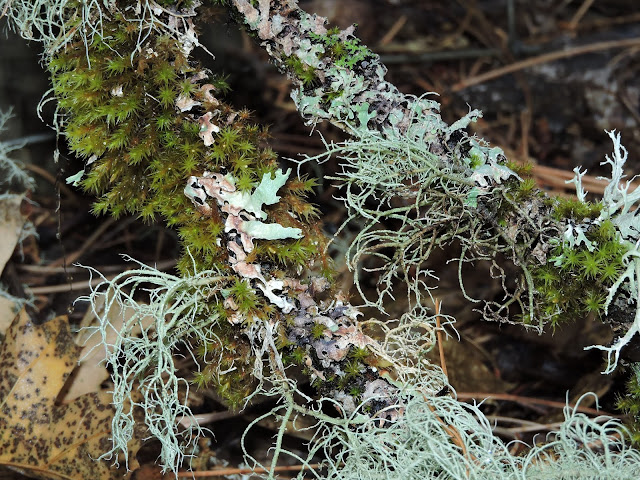 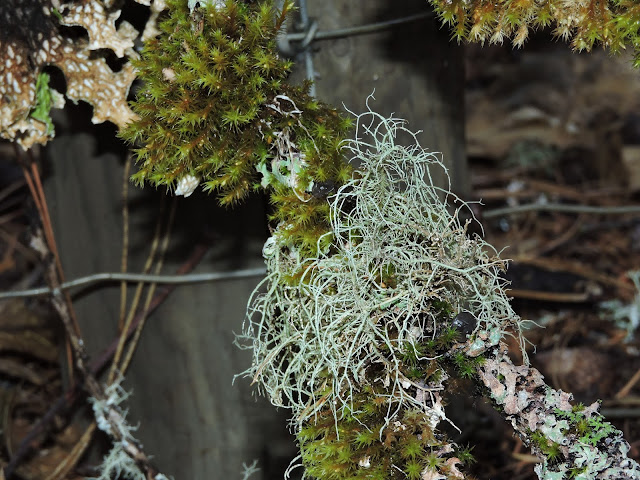 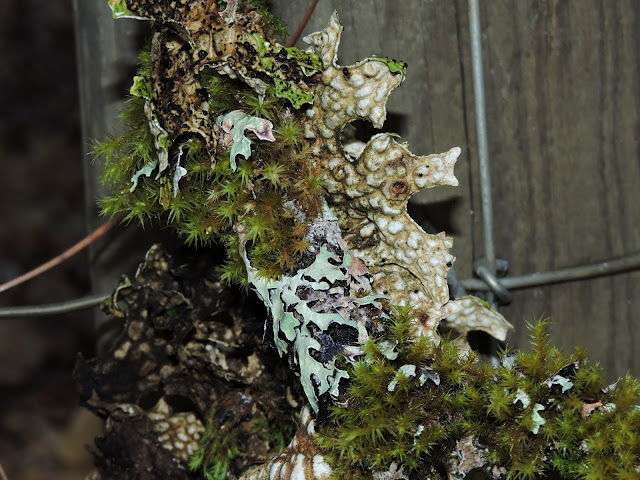 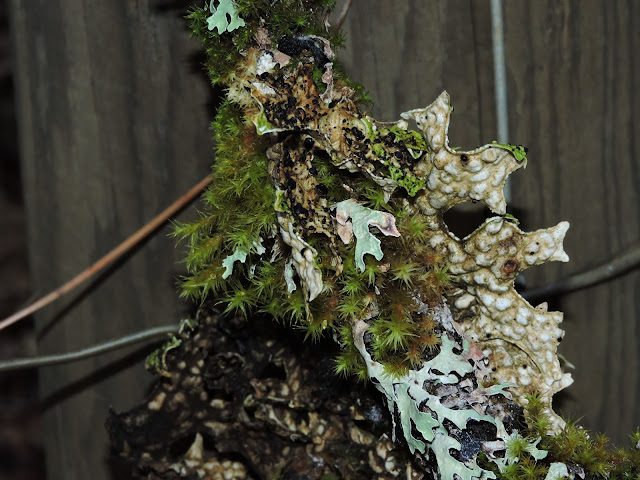