Drive through rural Southern Oregon in summer, and you will see wild carrot blooming in dry pastures and on roadsides everywhere in low elevations. Wild carrot, progenitor of the cultivated carrot (D. carota ssp. sativus), is a naturalized nonnative originally introduced from Eurasia, the exact conditions of the introduction aren't clear. Carrot is biennial, meaning that the plants usually bloom the second year from seed, then produce their own seeds and die.
One upon a time, long before European settlers first made this land their home, the flora was probably very different. The introduction of grazing livestock such as sheep or cattle created conditions that favored grasses, including many introduced grasses, after much of the native flora was grazed away. Compaction of the topsoil and soil disturbance, as well as the intentional and accidental introduction of a variety of nonnative plant species with a variety of uses were other factors that changed the landscape. These introduced species, as well as the physical impact settlers had on the land, changed the landscape in ways that are hard to imagine. 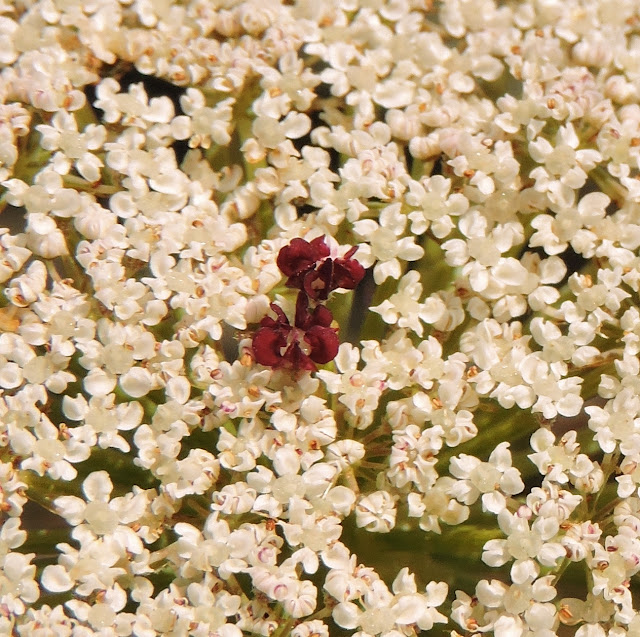 Each tiny floret will produce seed. In the very center of the umbel is one or two reddish to blackish colored florets that are thought to have some role in attracting pollinators, or at least that's the prevailing theory since there isn't any other obvious reason for it.
But all is not lost. Wild carrot is a useful insectary plant with flowers that support a wide variety of pollinators and other beneficial insects. An umbel, the inflorescence in which the flowers are born, contains hundreds of tiny florets complete with pollen and easily accessible nectar. Following I will exhibit a few of the floral visitors I have observed on carrot umbels over the past few years.
Among the beekeeping community at large, there is an urban myth that honeybees only visit carrot flowers every ten years and that it causes the honey crop to become bitter and distasteful. While I can't attest to the latter, I can say without a doubt that I have observed honeybees working carrot flowers for three years running. This may be more indicative of the lack of available forage for honeybees than their actual interest in carrot as a resource. In commercial pollination of carrots for seed by honeybees, how much seed is set is dependent on the specific phenotypes as well as competition from other host plants in and surrounding the carrot crop. Native pollinators may be found to be more efficient and willing to visit carrot flowers, as illustrated by the series of photos below.
Small native bees, such as masked bees and small carpenter bees (Ceratina sp.) seem to like carrot flowers more than larger bees. While I have seen the occasional bumblebee visiting wild carrot flowers, they seem to be the exception to the rule. Small bees likely forage on wild carrot frequently where their habitat abounds, though their small size makes observation somewhat of a challenge. Perhaps a fine bug net swept through a dozen or so carrot umbels in bloom would yield a handful of small bees and other small pollinators that may otherwise remain unnoticed or unseen.
In my observations, there has been a greater diversity of wasps visiting the flowers of carrots than bees, though I suspect this is purely a condition of the time and place of my observations. Crabronid wasps such as in the above photo were also less common than sphecid wasps in my observations. Crabronids are theorized to be the closest living relatives to modern bees.

Digger wasps, such as Sphex, are often relatively large and in my opinion beautiful solitary wasps. Most wasps, in general, have mouth parts poorly equipped for foraging for nectar like bees, but have mouth parts well suited to accessing the nectar of plants in the Apiaceae, or parsley family, to which carrot belongs. This explains why many carrot relatives are excellent insectary plants. Sphex prey on katydids, which are paralyzed and buried in a subterranean nest for the larvae to feed on.
Thread-waist wasps, such as Ammophila, are common visitors to a variety of flowers. I postulate they have longer than average proboscises than some of their relatives since they visit flowers such as Allium and Echinacea which have nectar held deeper in the florets than Daucus.

Predatory spider wasps are some of my favorite types of wasps. They are solitary and often have underground nests like many sphecids and crabronids. As the name implies, spider wasps hunt spiders. A single spider, paralyzed by one to several stings, in dragged to the wasps nest where a single egg is adhered to the spiders underside. The wasp larvae feeds on the living spider.
Tiphiid wasps are normally parasitoids of soil dwelling beetle larvae, sometimes other wasp or bee larvae inhabiting soil or rotten wood. Tiphiids are hairy, the first time I saw one I thought it was a bee.

Solitary aphid wasps, Stigmus sp., were about the same size as masked bees and likewise almost completely devoid of hair of their bodies. When I took this photo I had mistaken it for Hylaeus, a masked bee. They are very small, and many features are lost to unaided eyes. That is one of the things that I love about macro photography, synonymous to a mobile action microscope. These small wasps nest in hollow twigs, and mass provision cells with aphids.
Potter and mason wasps (Eumeninae) are solitary members of the Vespidae, the family containing some of the more infamous members of wasphood (i.e. yellowjackets). Unlike their eusocial cousins, mason and potter wasps are not aggressive and very unlikely to sting. Those who have been stung by them report a disappointing experience, not for any pain the sting inflicted, but for the lack of anything notable. Yellowjackets and paper wasps evolved venoms that inflict not only more pain but more damage to tissues. This is because eusocial species must not only defend themselves but their nest mates, their nest, and all the young and resources within the nest. Solitary species invest relatively little into the construction of their nests, thus will readily abandon them and start anew rather than risking their lives defending the nest.
Eusocial vespids also visit Daucus. The only local eusocial vespid I have not seen visiting carrot flowers are the large bald-faced hornets, Dolichovespula maculata.
The majority of wasps don't collect pollen for their young, and most don't collect nectar either. Adults of many species will visit flowers for nectar for their own use, fight takes a lot of energy and nectar is a good source of carbohydrates. Some wasps do collect and store a small amount of nectar, a sort of wasp honey. I have seen this substance in Polistes wasp nests of a few species, and have heard that yellowjackets do this too though their nests are harder to observe since they are usually underground.
A variety of wasp or bee mimics are attracted to the small plentiful flowers of carrot. Various hoverflies are commonplace, many of them being wasp/bee mimics. They fill several roles as pollinators, predators (larvae), and recyclers. The species photographed above feeds on bacteria in the larval stage within rotting logs or other rotting plant matter. Their color patterns are an aposematic defence, a form of Batesian mimicry. Flies don't have stingers, and all but a few (no syrphids) can bite.
Tachinid flies, like syrphids, are good to have around. Most are parasitoids, the larvae feeding on an array of pest species such as moth larvae or other flies.
Mimicry isn't restricted to flies. Beetles also employ color schemes which might give pause to potential predators. The ornate checkered beetle is often found on flowers. Adults take nectar, and may feed on pollen as well. They are parasitoids of ground nesting bees and some wasps.

Blister beetles are numerous in late summer, often seen on flowers in dry areas. They produce a chemical compound that, when touched by human hands, cause blisters to form. Adults eat flower parts and perhaps take some nectar. They are common where Madia elegans is in bloom, in my experience.
Ladybird beetles, like the honeybee, are one of the poster children representing beneficial insects and often adored by young children. Like the honeybee, the seven-spot ladybird beetle is an introduced species sold for aphid control. There is anecdotal evidence suggesting that they negatively impact the native species. 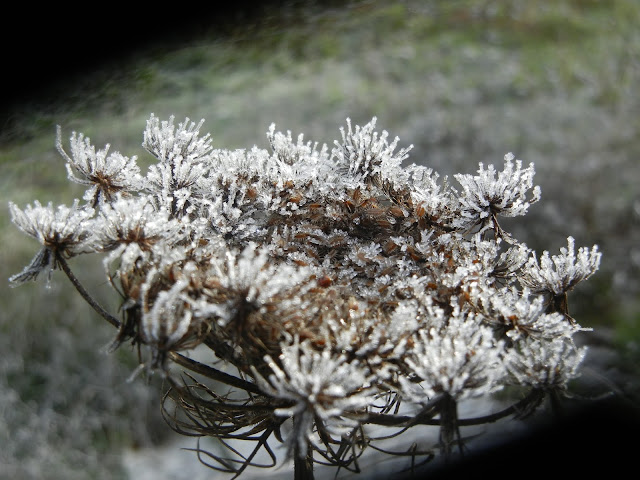 By the first frost in fall, most of the fruits have fallen onto the ground awaiting amenable conditions in which to sprout. Many of the plants in the Apiaceae have seeds which require light to germinate, so when sowing it is best to just cast them out onto a prepared seed bed and tamp them in. Many also benefit from a cold treatment, so a fall sowing is beneficial. These tips I have learned from observing how the plants sow themselves. By late fall, most of the seeds of dill, carrot, parsley, lovage, angelica, and nearly all others have naturally been dispersed by some means. Most also have taproots, so direct sowing is the easiest way to grow them. 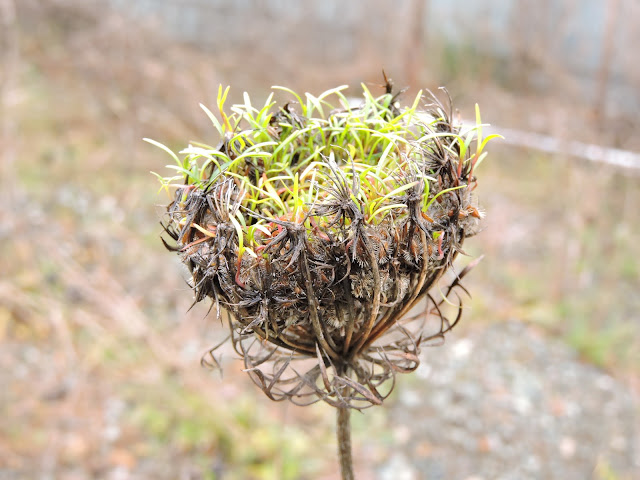 When the seeds don't fall, they are happy to germinate right on the inflorescence. This is a futile endeavor, of course, and as soon as the rains cease in late spring they are doomed.
at 9:00 AM