As this year progresses, it feels more and more like Spring has already begun to wake up all the locals. I'm talking of course about the locally native wildflowers and other plants that call this area home. Some plants are capitalizing on the mild condition we have experienced by deciding to open their flowers earlier than has been the typical schedule in recent years.

This fascinates me, and suggests that these two genera respond to completely different "worldly" cues to tell them when to initiate growth and flowering. The Dodecatheon may be more responsive to temperature to send up flowers, while the Erythronium may be responding to day length. I do not know. This dynamic must have a profound effect on pollinating insects, chiefly bees who are the main pollinators. This is a two way street as these plants depend on bees for pollination. Early or late flowering (relative to past years) can be good or bad, taking into account both the effect (or lack of) competition, as well as the emergence of the bees themselves. It is quite complicated.

I have seen this diminutive species on occasion. It is a striking contrast to the large garden species, on;y reaching a scant three or four inches, though it is even easier to miss. It is likely a fly-pollinated species, growing in shady cold areas of the yard, in very low density. I have almost never seen two flowering plants within ten feet of each other. Peculiar. It makes me wonder, just how does it keep going? 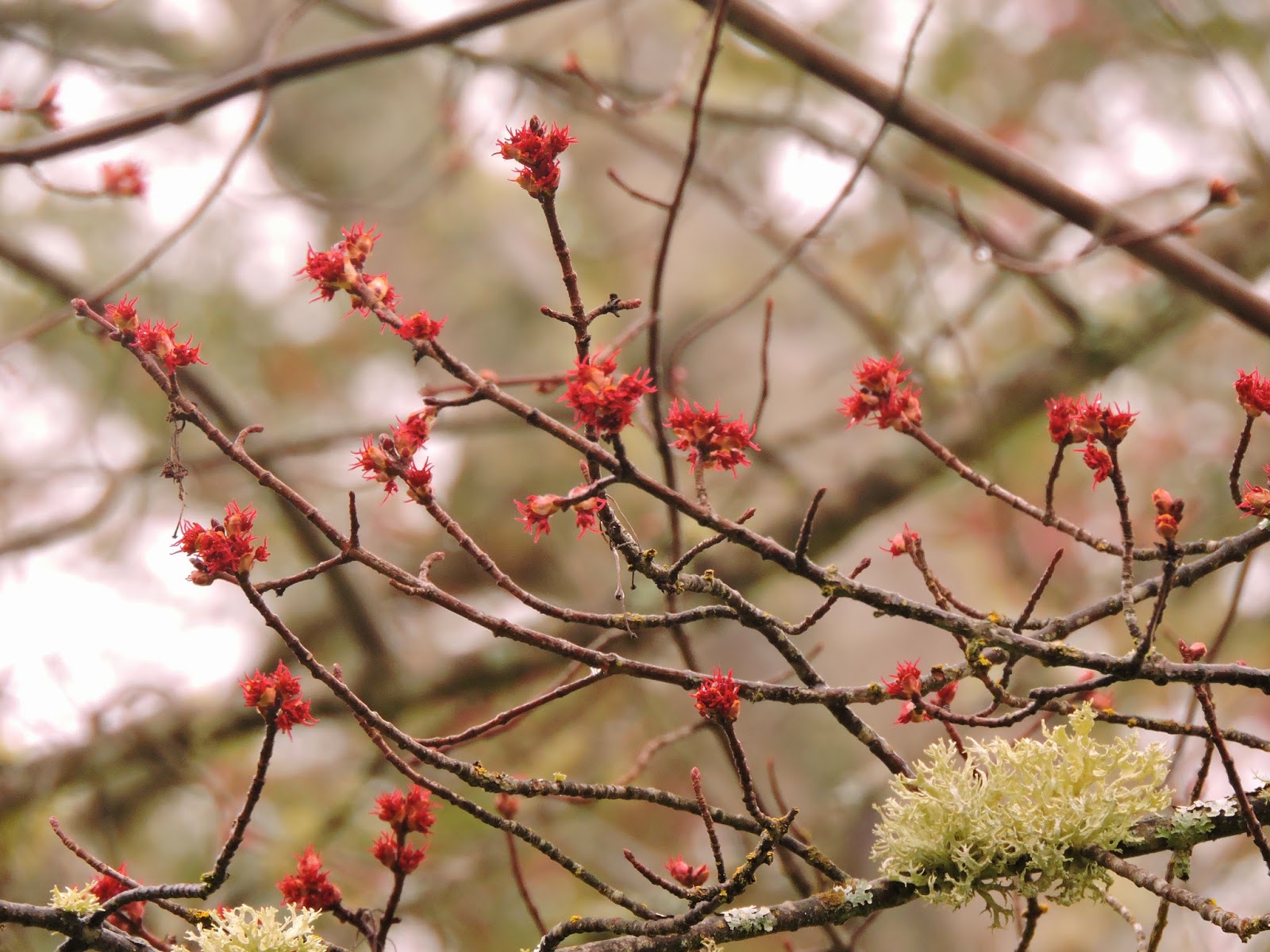 Large red maples are famous for their Autumn leaves, but their true beauty is when they are in flower. It is almost an unreal sight up close, almost every branch and twig of two-hundred foot tall giants covered in tiny red flowers, stigmas and anthers extended in the hope that at least a single insect will come and feast.

For a plant to be successful, only a single fertile seed must be produced in the lifetime of a plant (tree or whatever) to pass the genes, and live for the future. There may be tens of thousands of tiny flowers on a single red maple tree. Wow.

The earliest of early hounds tongues, this small plant is still ages ahead of the rest. Morning rain had moistened the hairs on the plant, giving it a glossy shiny appearance. Typically, the flowers age to blue. It will be interesting to see if this plant remains pink. Though my preference is for the striking blue, an early pink would be an interesting oddity for the species.
________________
﻿
I will leave you now with another angle of the Dodecatheon from the first picture of this post. The sun shines through the trees as a reminder that in a matter of months it will rule this land and we will resent its presence. At the time being, it is a cherished resource and a welcome friend to human, plant, and bee alike.