The North side of our house, like many others, tends to get more shade throughout the year. This shade reduces the amount of evaporation that occurs, and mosses and other Bryophytes thrive. From inside my daughters room, I was able to take this photo of the part of the roof that faces the North. Much like a harsh mountain peak, the roof in an extreme environment, and most plants are unable to gain a foothold. But as you can see, these cushiony mosses thrive here. I cannot help but compare them to alpine, tundra, or even coastal flora as the "cushion" shape occurs at all of those locations. The cushion form helps retain moisture, important when plants are located in harsh environments (heat, drought, etc.) and helps reduce the effects of wind which can dry out or damage plants in extreme scenarios.

Reticulated Iris, so-called due to the fibrous "netting" on the bulbs. 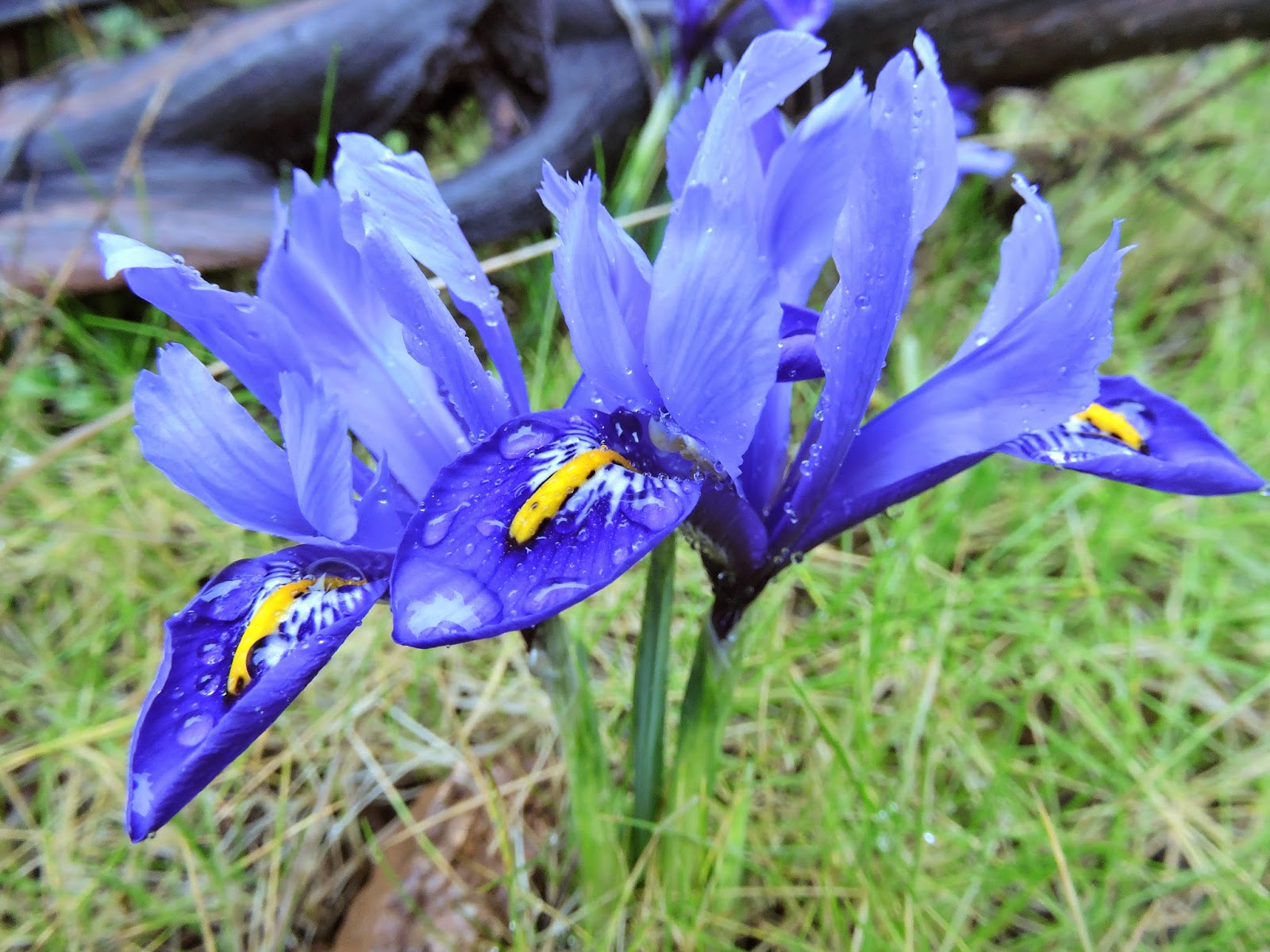 The first photo was taken early in the morning, as noted in the caption. It was raining, so I had a flashlight in my mouth while crouching, juggling an umbrella, and trying not to shake so I could get a good picture. This is what we do to take nice pictures. I couldn't resist the opportunity to capture the fresh rain drops held on the petals. Worth the trouble? Hell yeah.

The two other photos were taken the same day after work. It is amazing how quickly early bulbs come into bloom, as the day before there were no open flowers. Actually, the flowers in the latter two photos weren't even fully opened when I took the first photo in the morning. This is the benefit of the bulb, a storage organ, to use the stored reserves to come into growth very quickly before other plants (competition) come into flower. Last year, honeybees worked these flowers for nectar, but only the ones planted near the hive. 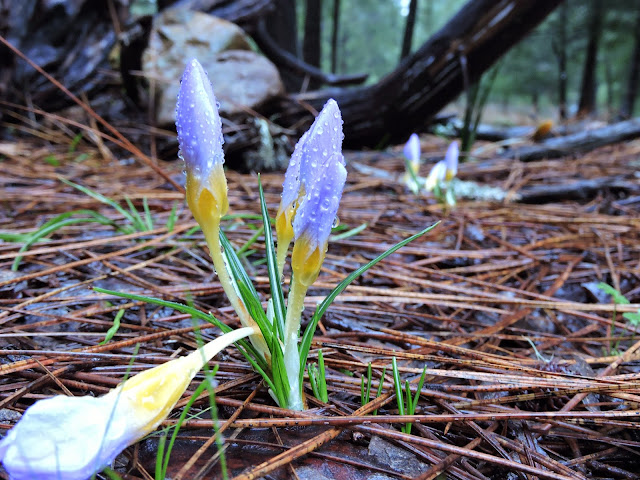 This picture should look familiar by now, because it is the same shot as was taken a week ago of the same corm. Now there are four buds, the eldest having collapsed. This location is under a tall pine tree in extremely rocky alluvial soil, too rocky for burrowing rodents. The pine needle duff also keeps other plants from growing, eliminating competition from grasses and weeds. It also highlights the color of the bulbs. 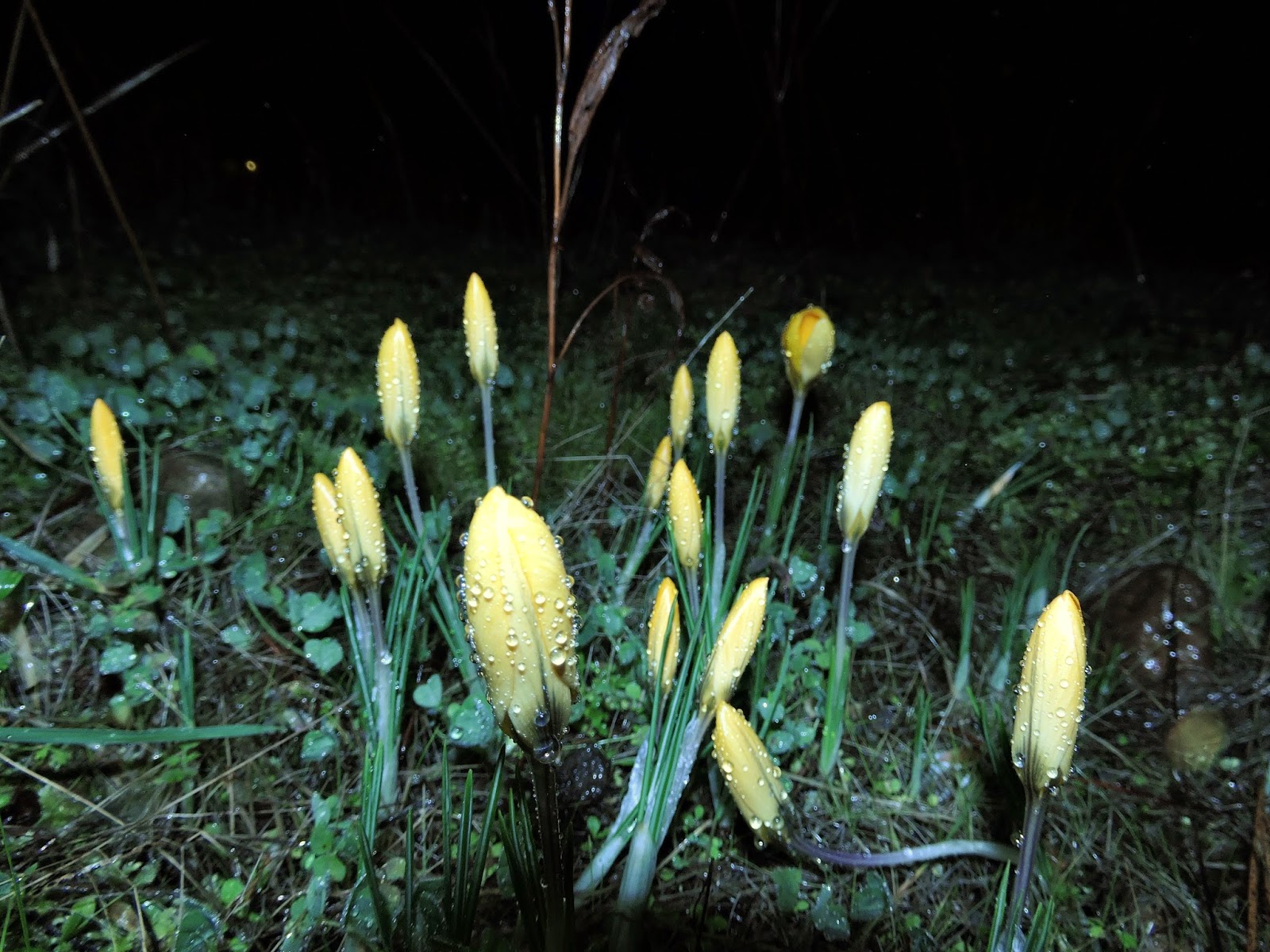 Crocus flavus "Yellow Mammoth"
The first photo was taken at around 6:00 AM PMT along with the Iris picture above. The second photo was taken later the same day. It has been too cloudy this week for them to open, like all the Crocus, which has helped them endure the heavy rain we've been getting. 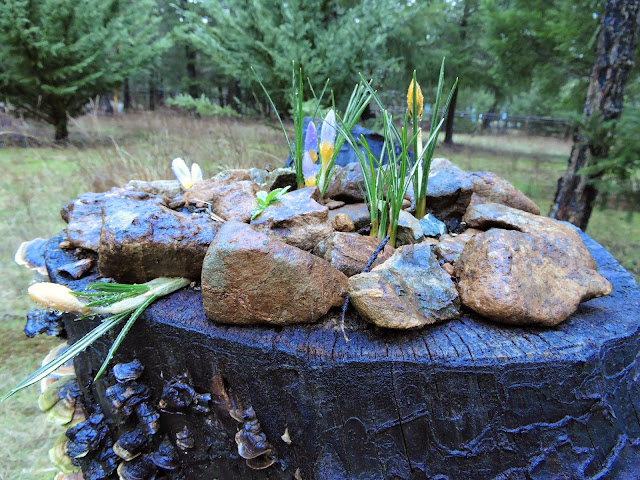 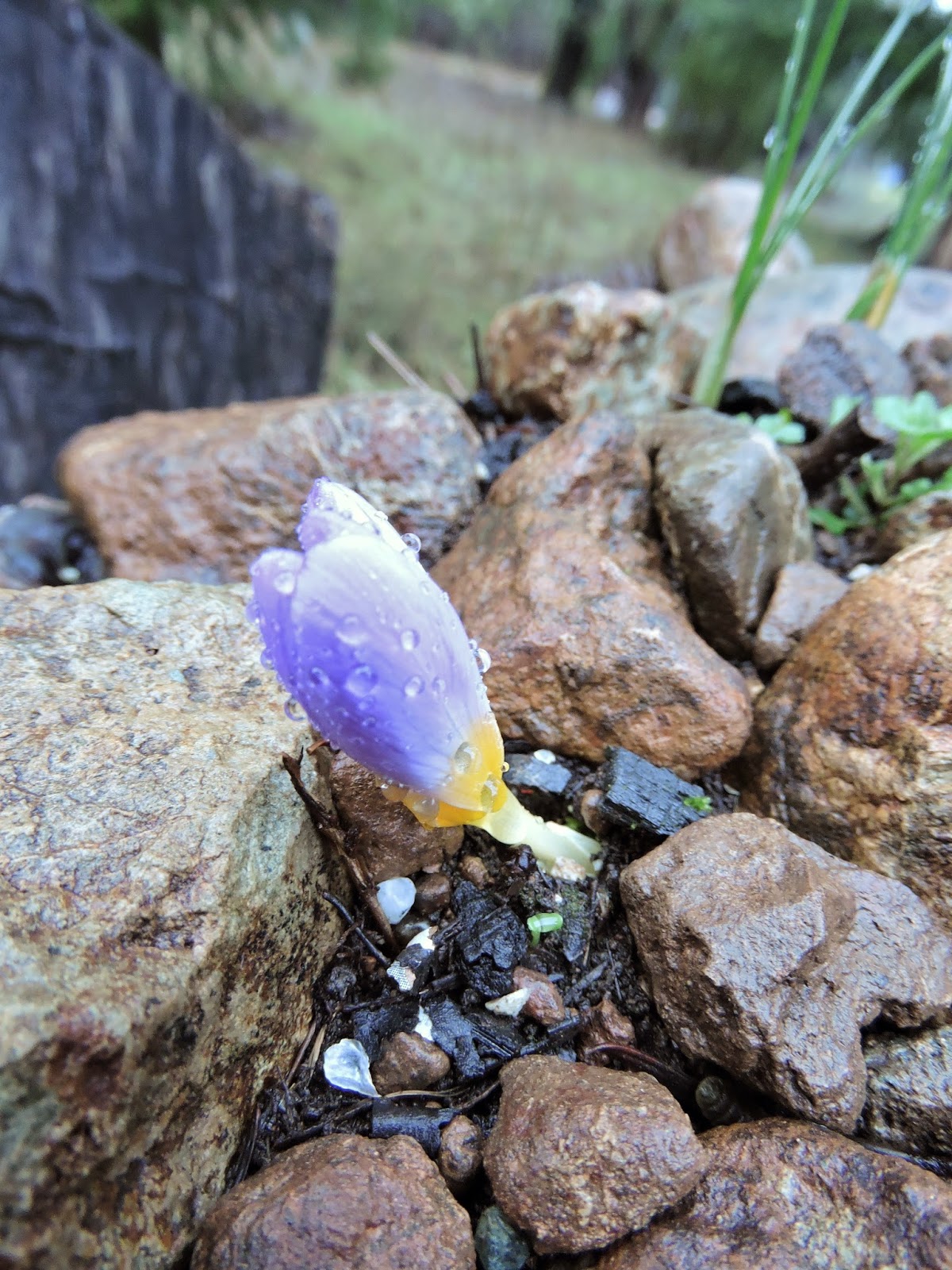 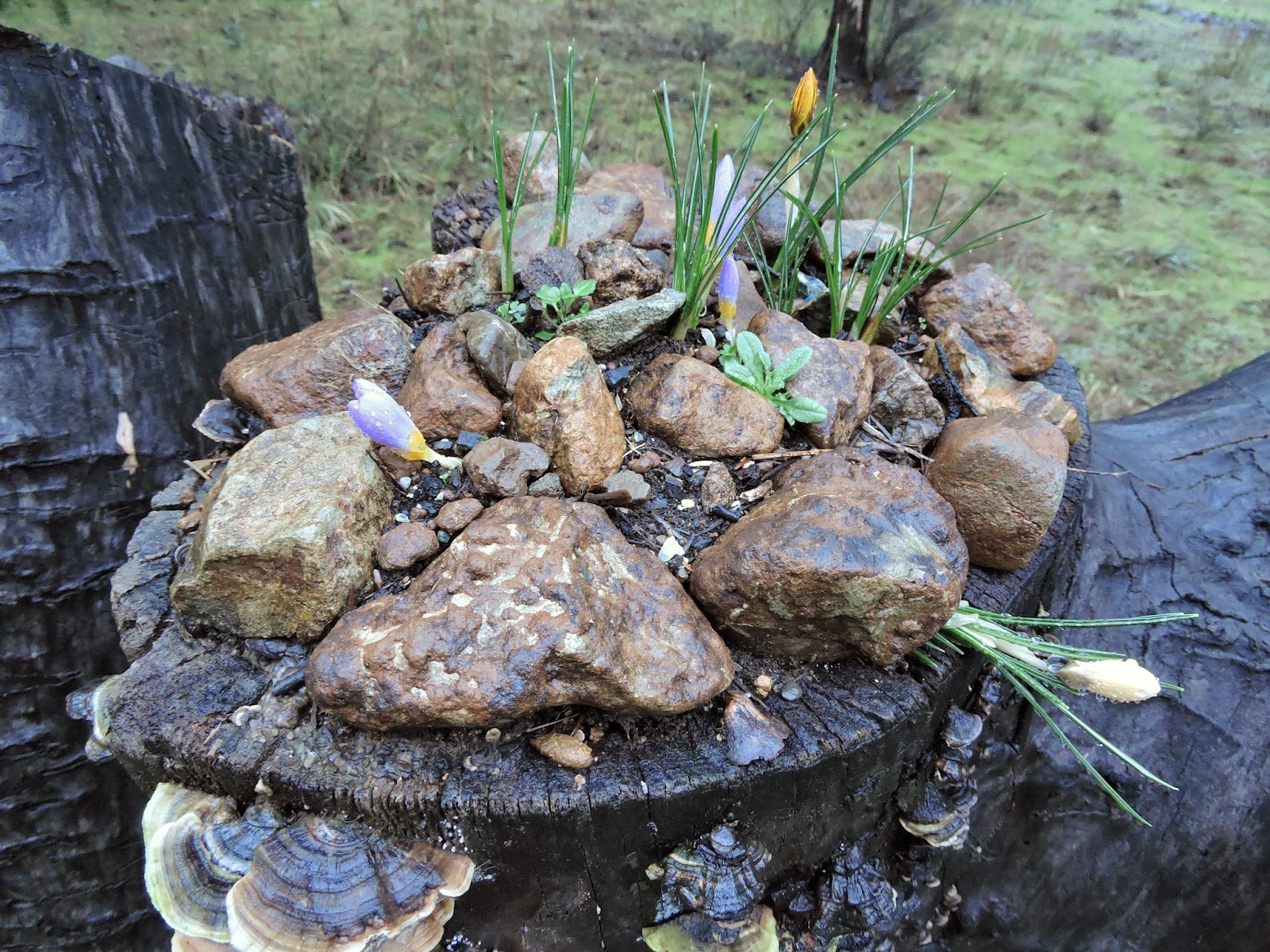 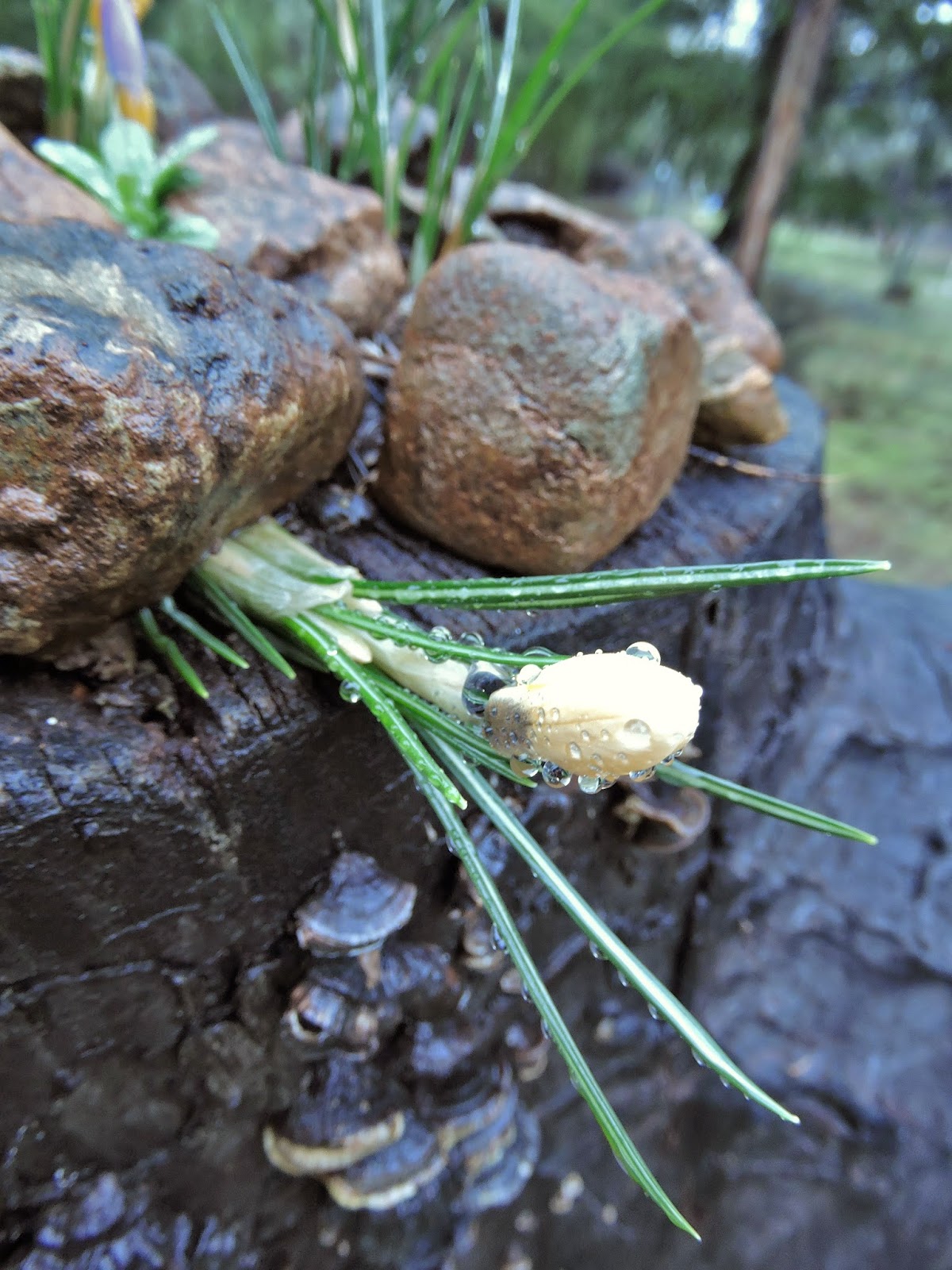 Here is the stump experiment, with C. sieberi and C. chrysanthus hybrids poking out wherever they can. The lower picture on the left shows one blooming before the emergence of the leaves. The lower right shows C. chrysanthus "Prins Claus". A variety of "weeds" from the compost have germinated as well, which may add some unforeseen benefit so shall be left in place.

In bud, this common Crocus selection, often combined in Crocus vernus mixes, is delicate and elegant, with the solitary purple stripe and feathering towards the base. It is also fairly prolific, a trait often associated with bulbs grown for sale.

This is a beautiful form, with creamy white tepals and purple feathering at the base. Hopefully I can get some seed from this one this year., if the slugs don't get to them first. 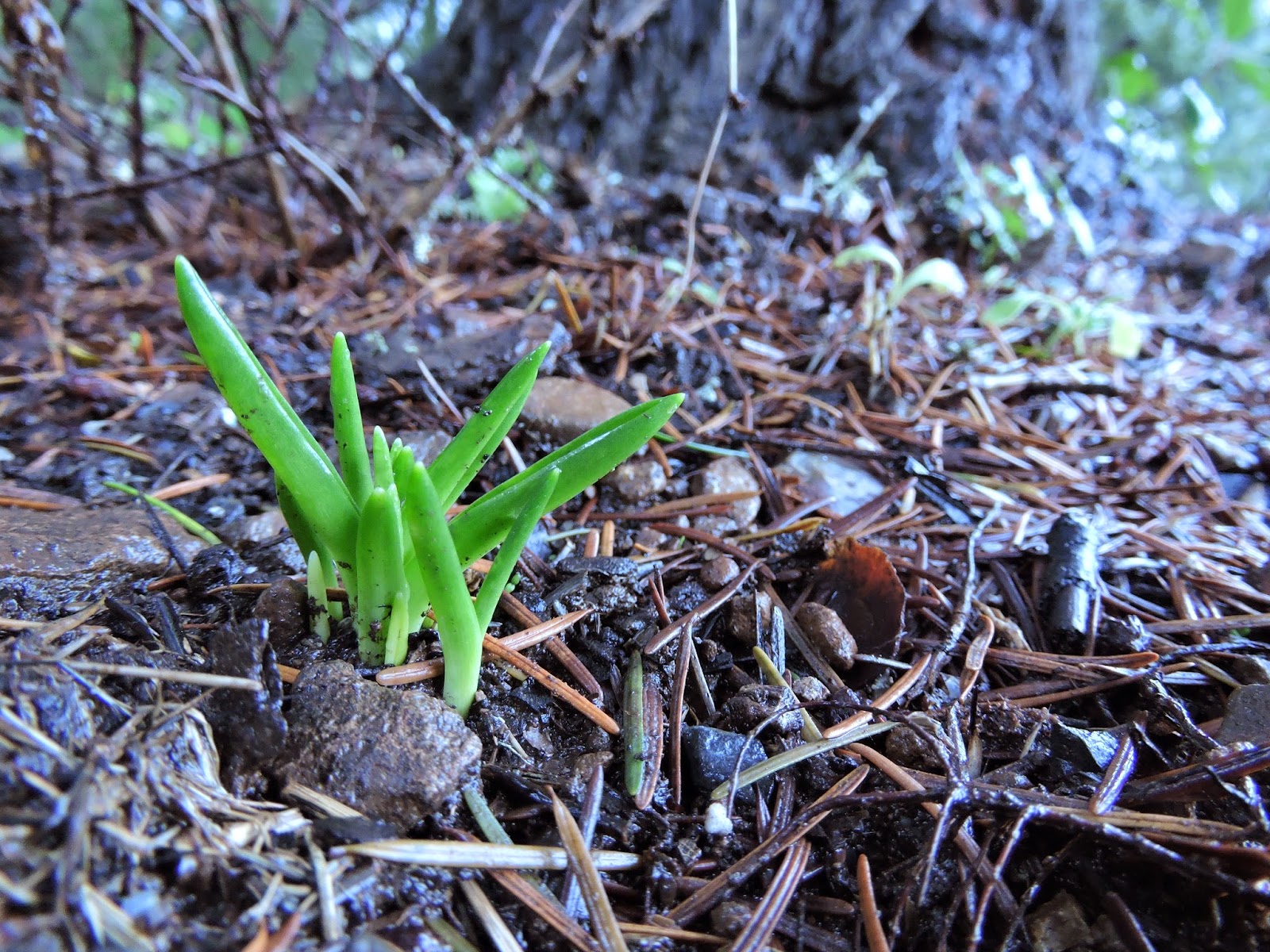 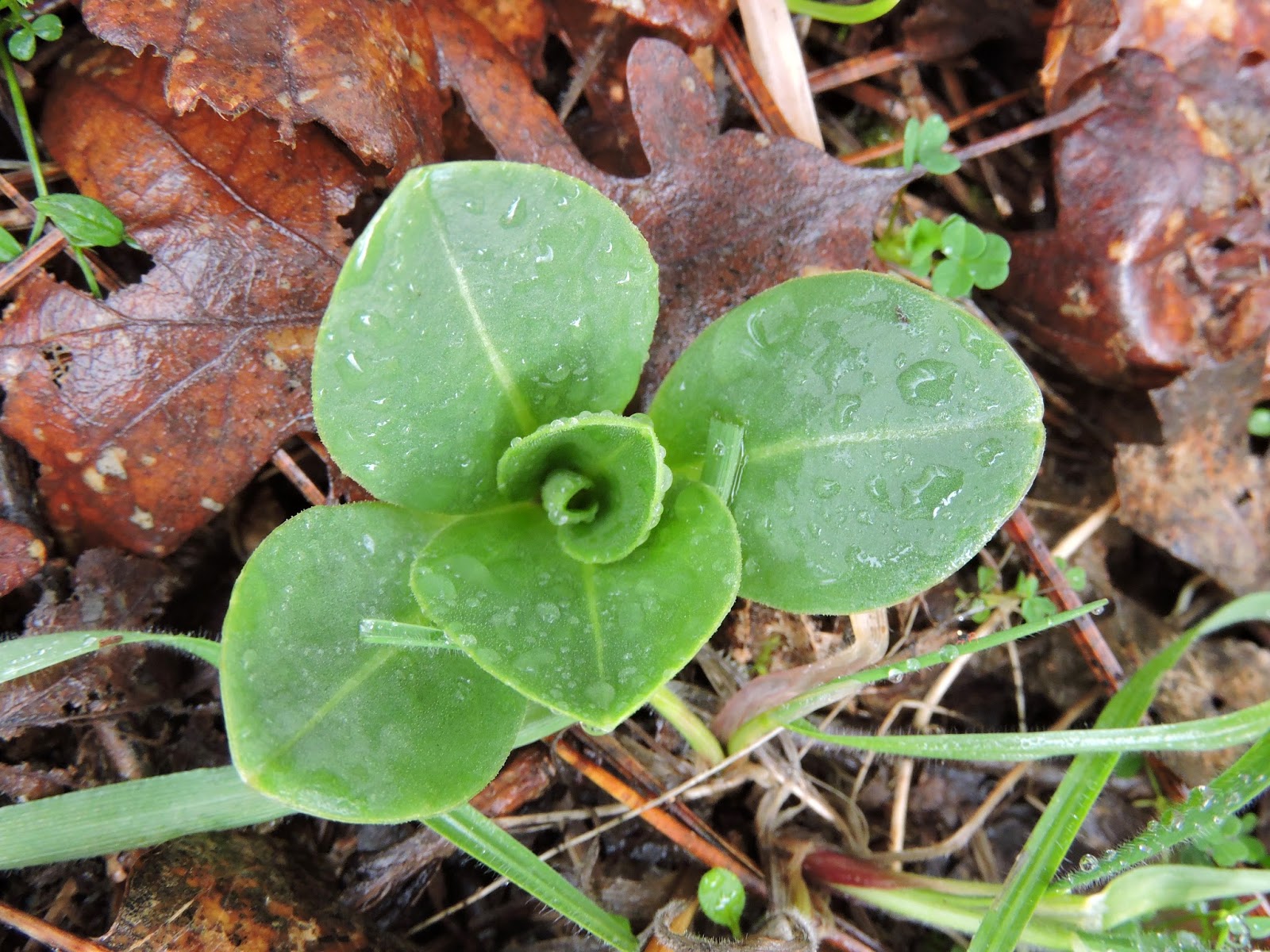 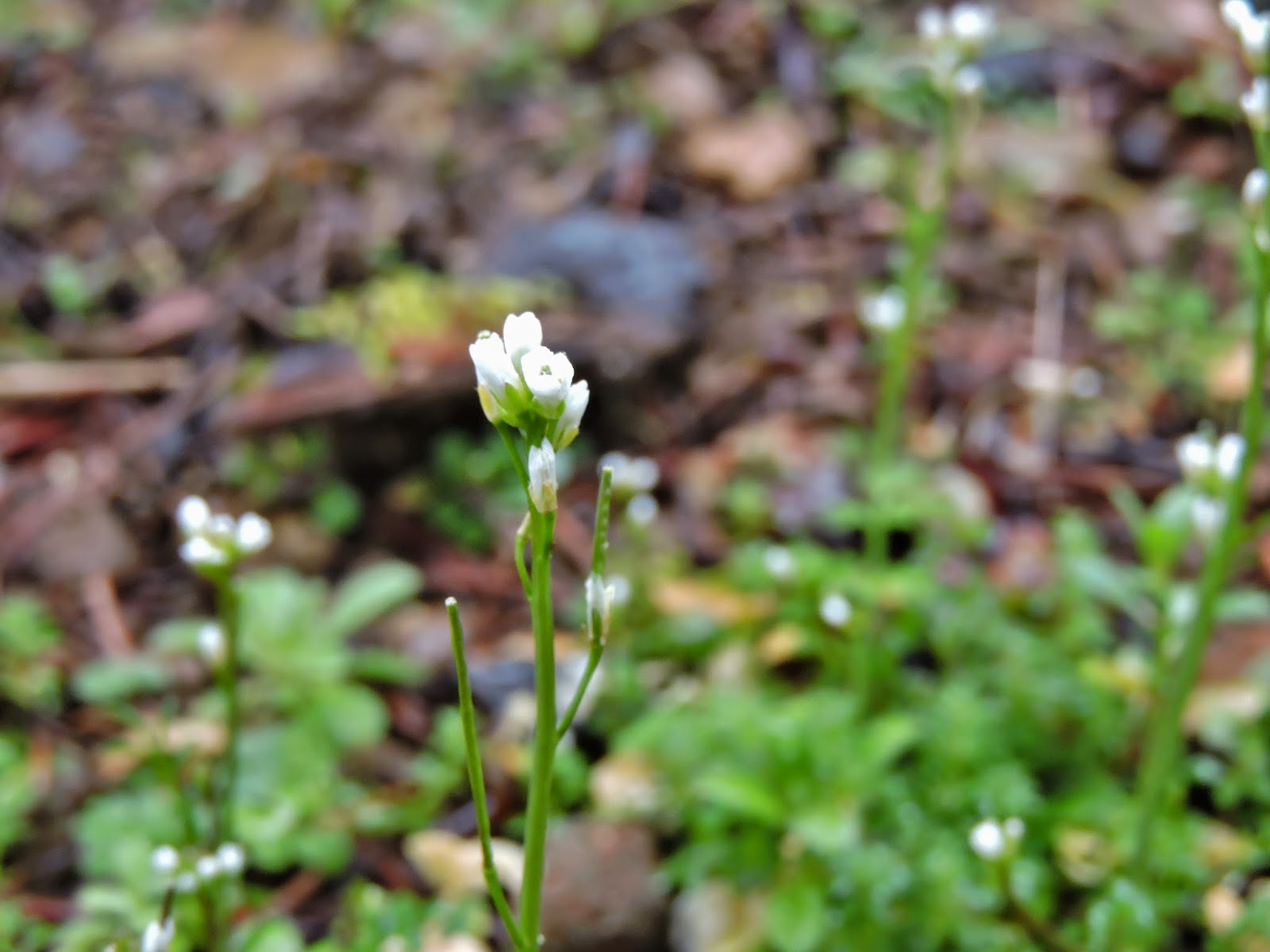 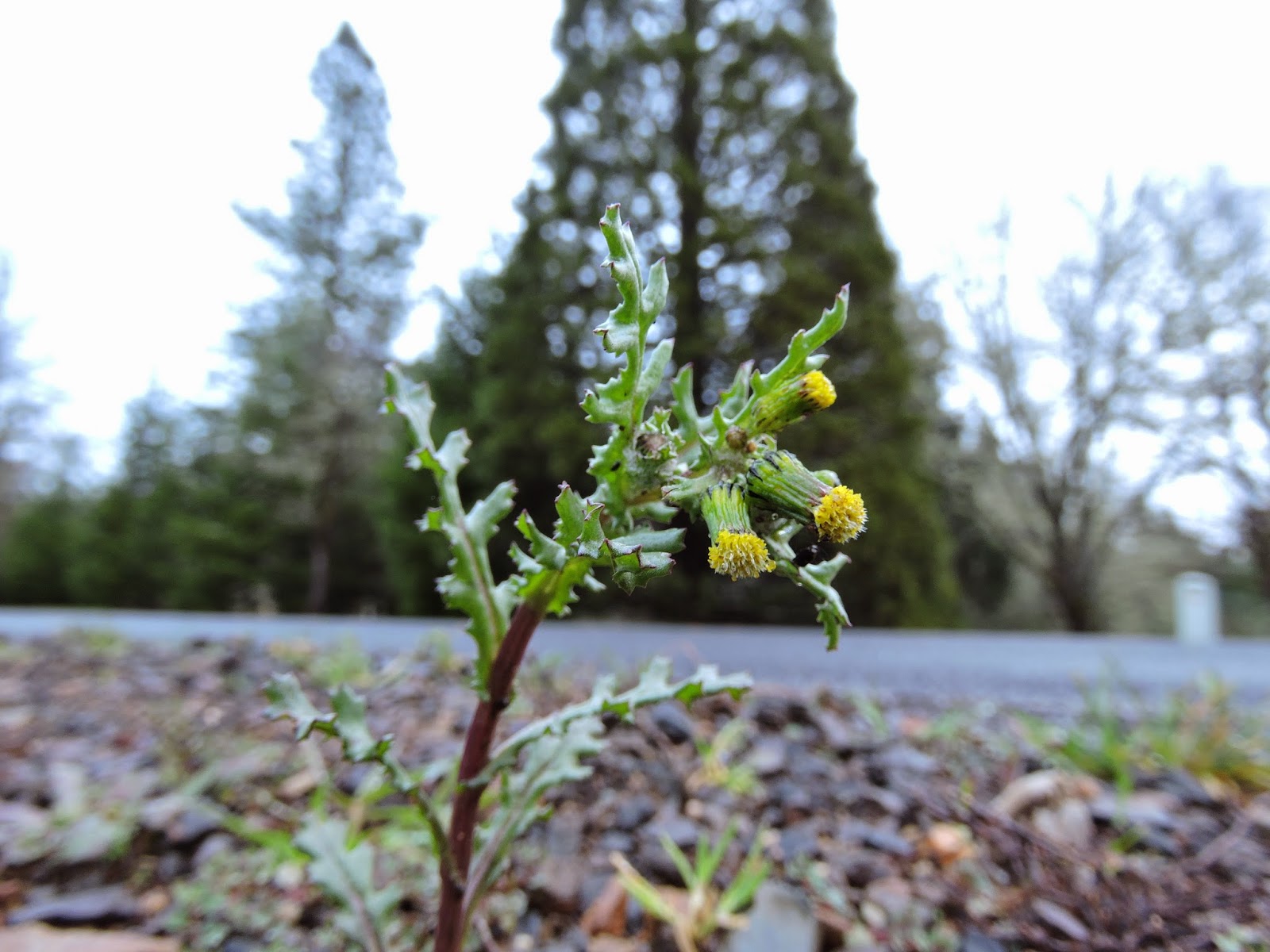 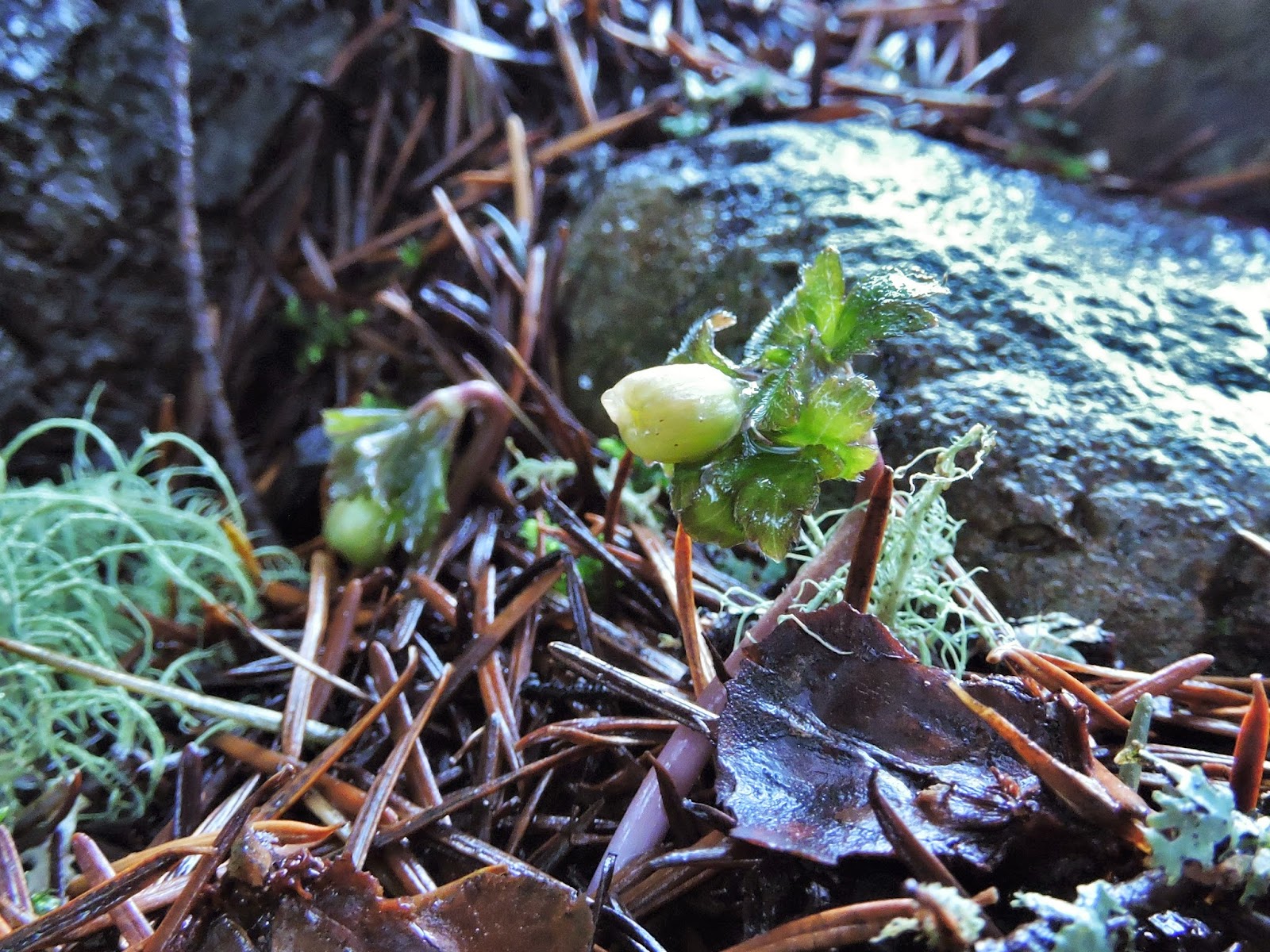 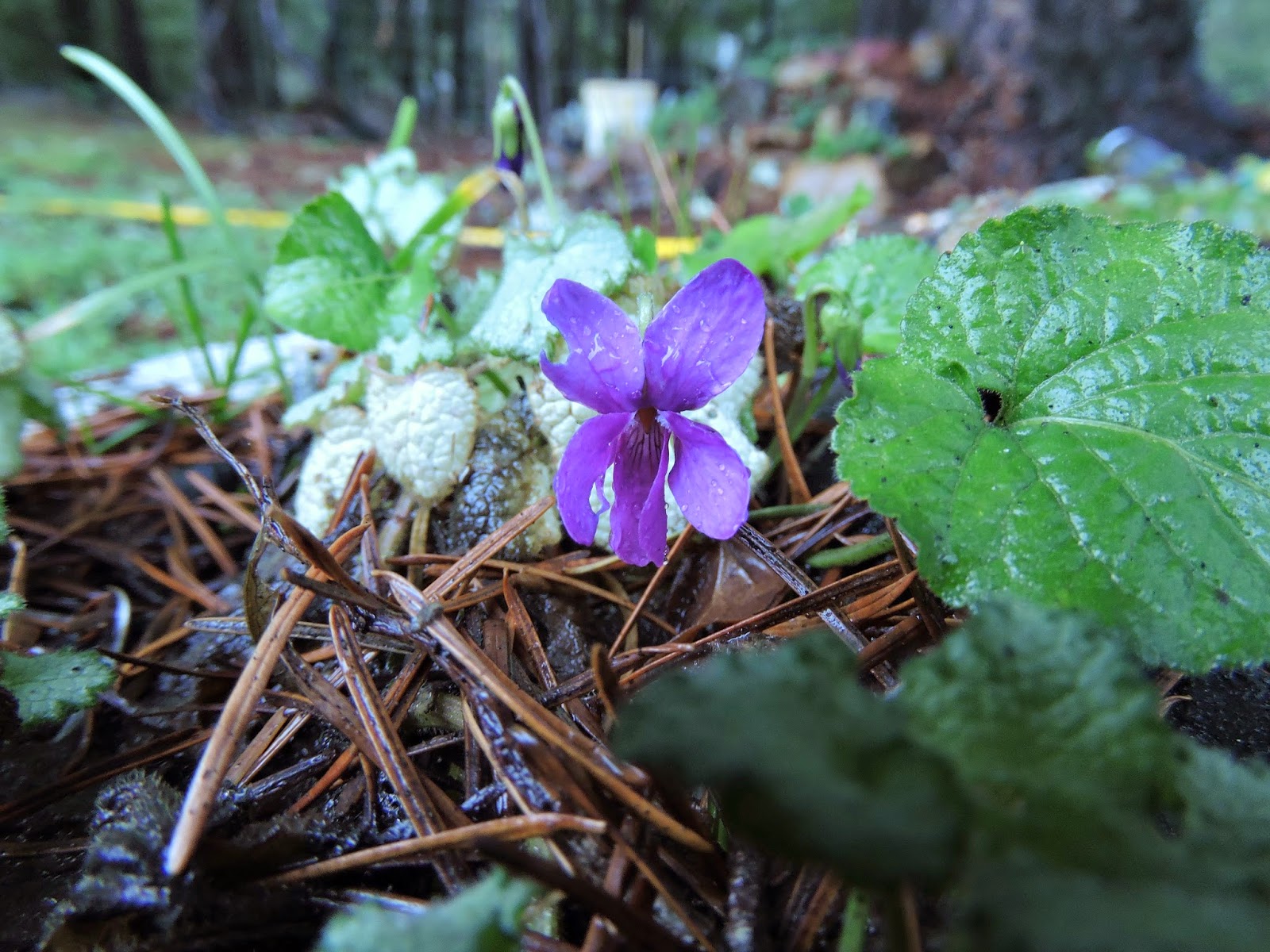 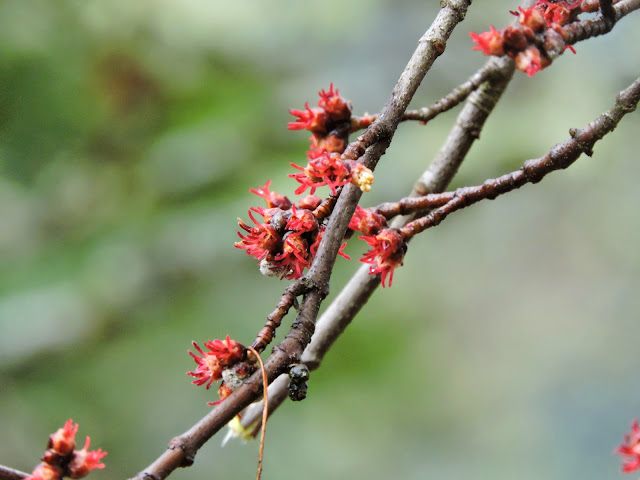 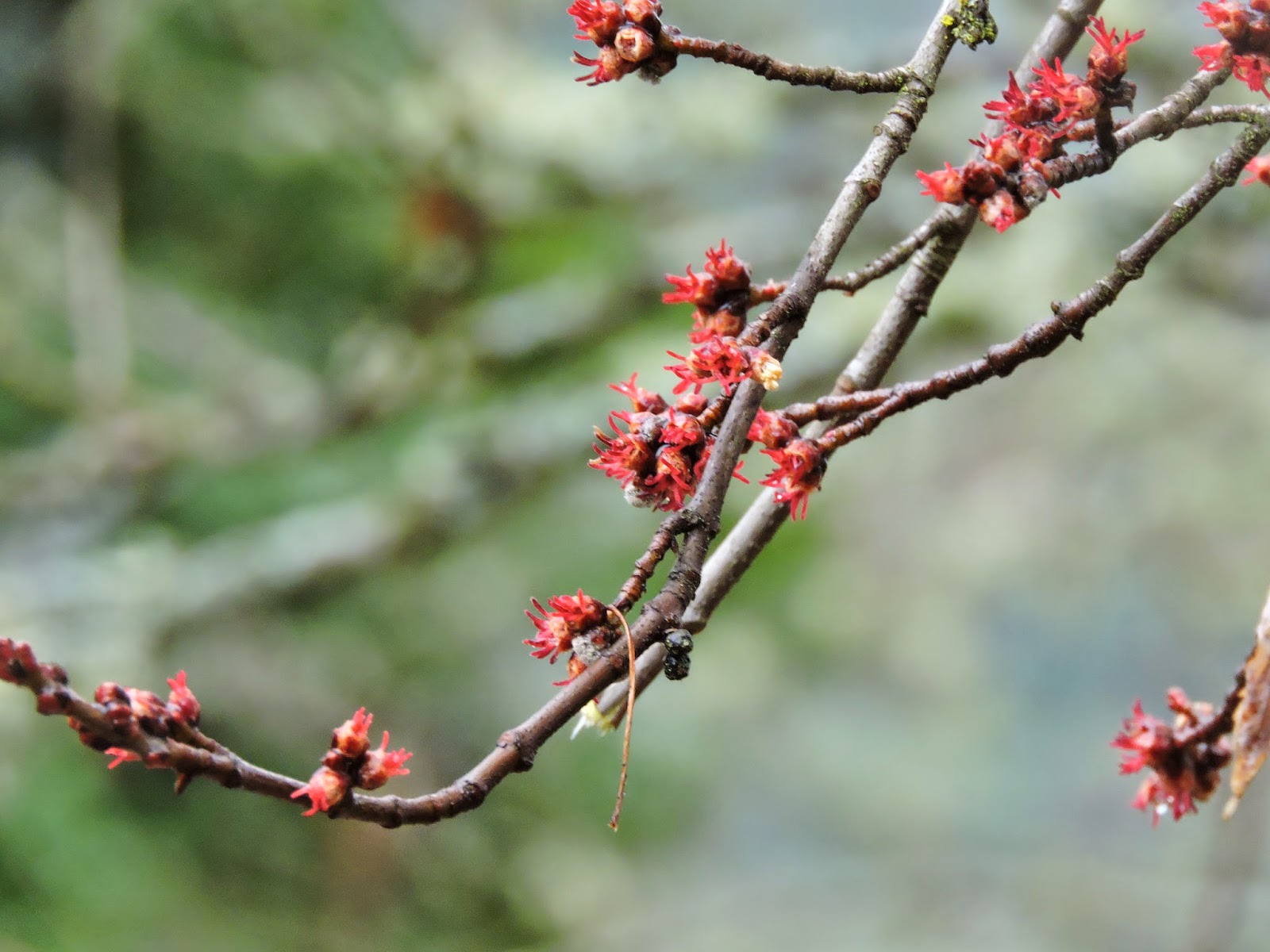 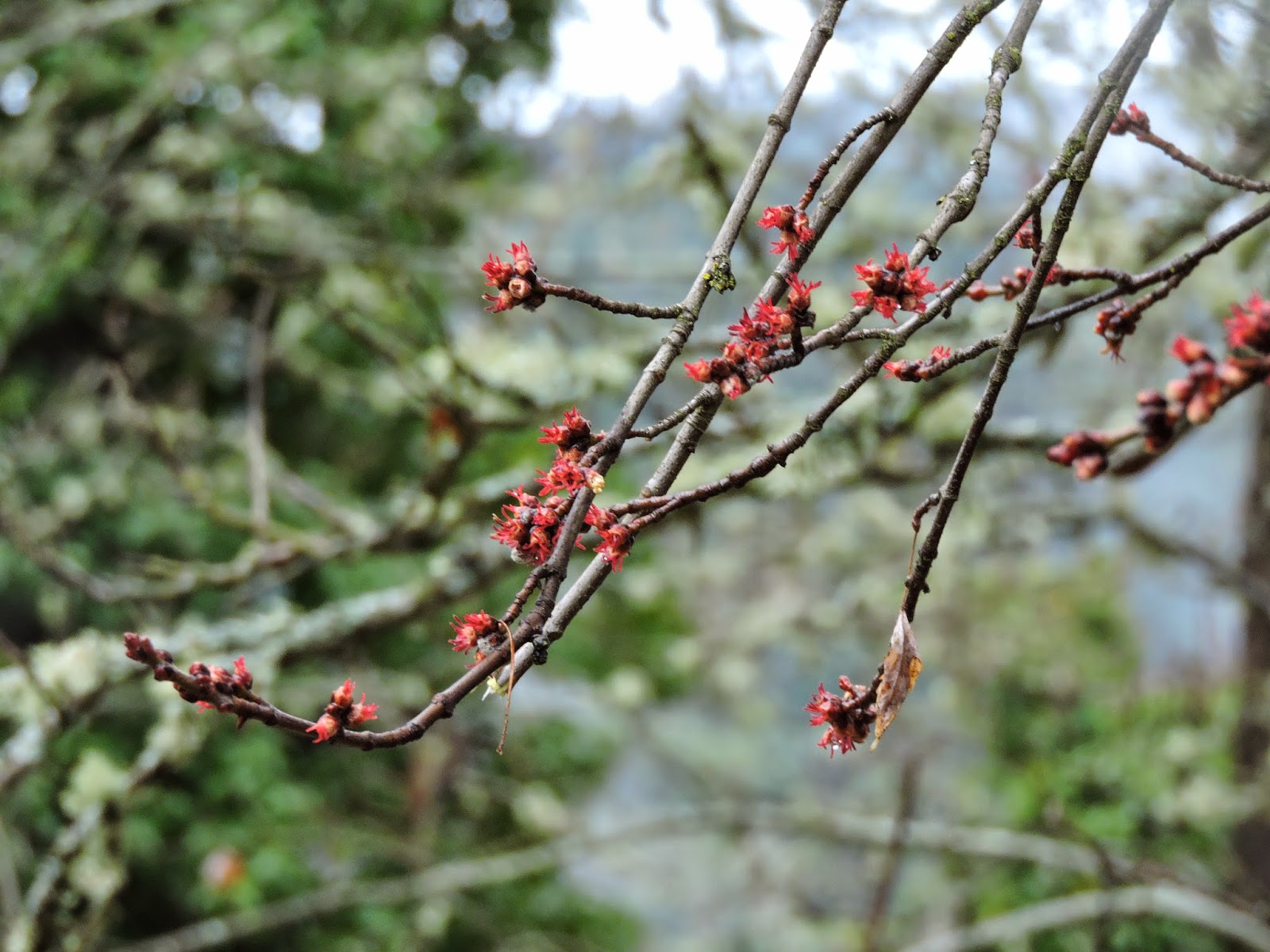 Conspicuous red stigmas of either Silver or Red Maple in Palmerton Park, a local Arboretum. Bees are known to visit Maples for early pollen and nectar, but the recent rainy weather has prevented any such visits, to the detriment of both parties. Still, the small red flowers (around a quarter inch) cover the trees, even on the lower branches, and are quite stunning on close inspection.