Scilla, or squill, is one of my favorite genera. the small bulbs fend for themselves and seem to be ignored by pests. This unpronounceable species is special to me, though I could not articulate the reason. Notice the anthers.
Scilla mischtschenkoana, or sometimes incorrectly 'Scilla tubergeniana', is a small early squill from the Caucuses and parts of Iran. It grows at a somewhat high elevation, which may explain its strange habbit of flowering before it is above the ground. It will eventually reach around three inches. 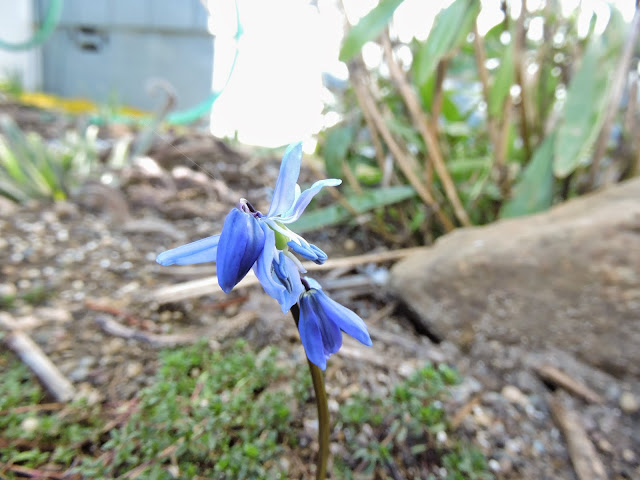 Siberian squill is another special wildflower (yes, bulbs are wildflowers). They can appear messy from a distance, but are elegant in close inspection.


Sweet violets are Another nice perennial species. They happily colonize large patches of ground without being intrusive or overwhelming, topping out at three or four inches. On warm days, they omit a strong scent, but it's good! Bees like the flowers.

﻿
Buttercups are a reliable wildflower, appearing around the same time every year regardless of the weather. They are pollinated by flies, and the pollen and nectar are toxic to bees. Bees seem to be aware of this, I have seen hives placed in fields packed full of buttercup blossums only to be completely ignored.
﻿﻿

A relative of Ranunculus, it is not hard to imagine the relation when looking at the two pictures above. Unlike Ranunculus, Anemone blanda is not toxic to bees. There has been debate as to whether they produce nectar at all, and it will take observation of bee behavior on the flowers to determine this.
﻿﻿
﻿
The unopened buds of Muscari are interesting. The spike will grow and elongate as the flowers mature, eventually outgrowing the violet.

This is a very early flowering Hound's Tongue, budding before others have even produced a scape. Though not considered a "geophyte", this species does go through a long dormancy starting when the soil dries out in the beginning of summer. It is primarily a bumblebee pollinated species, with large Myosotis-like flowers. It is one of the best plants in the Boraginaceae, or Borage family, in my opinion.


Leaves and seedlings of the fawn lilies have begun to emerge. They take a few years before developing the intricate markings on the leaves. I can't help wonder if the colorations are a form of camouflage, disguising the leaves from deer or other herbivores. The mottling is different to the species in the American West, the leaves of which have mottling the appearance of splattered paint.

The common garden hyacinth is not the most "wild" looking bulb, and is probably a far cry from the wild form. However, they are attractive to bumblebees, and somewhat reliable and perennial here, however reputed to dwindle in some locales.

Echinacea's are one of my favorite composites. They are incredibly useful, ignored by deer, easy to please, attractive to bees and butterflies, and to me. This is the time to divide the crowns to increase your plants and increase the vigor of the plants.

Oregon grape, Oregon's state flower, is in bud here now. There is some variation between individuals, as seen in these two photos. First is the inflorescence's themselves. Note the length of the separate spikes. Second, note the leaf color.
﻿

This group is close to my honeybees, so it will be interesting to see if they are interested in these for nectar or pollen, or both.

It is a good time of year to stare at the ground. I often find many surprises, mostly because I expect it to be winter, but the plants and animals are acting like it's spring.