Mosses and other Bryophytes are highly overlooked plants. Often thought of as "inferior" to angiosperms and other garden plants, I want to show that mosses and similar plants are probably the most important and resilient of all plants. 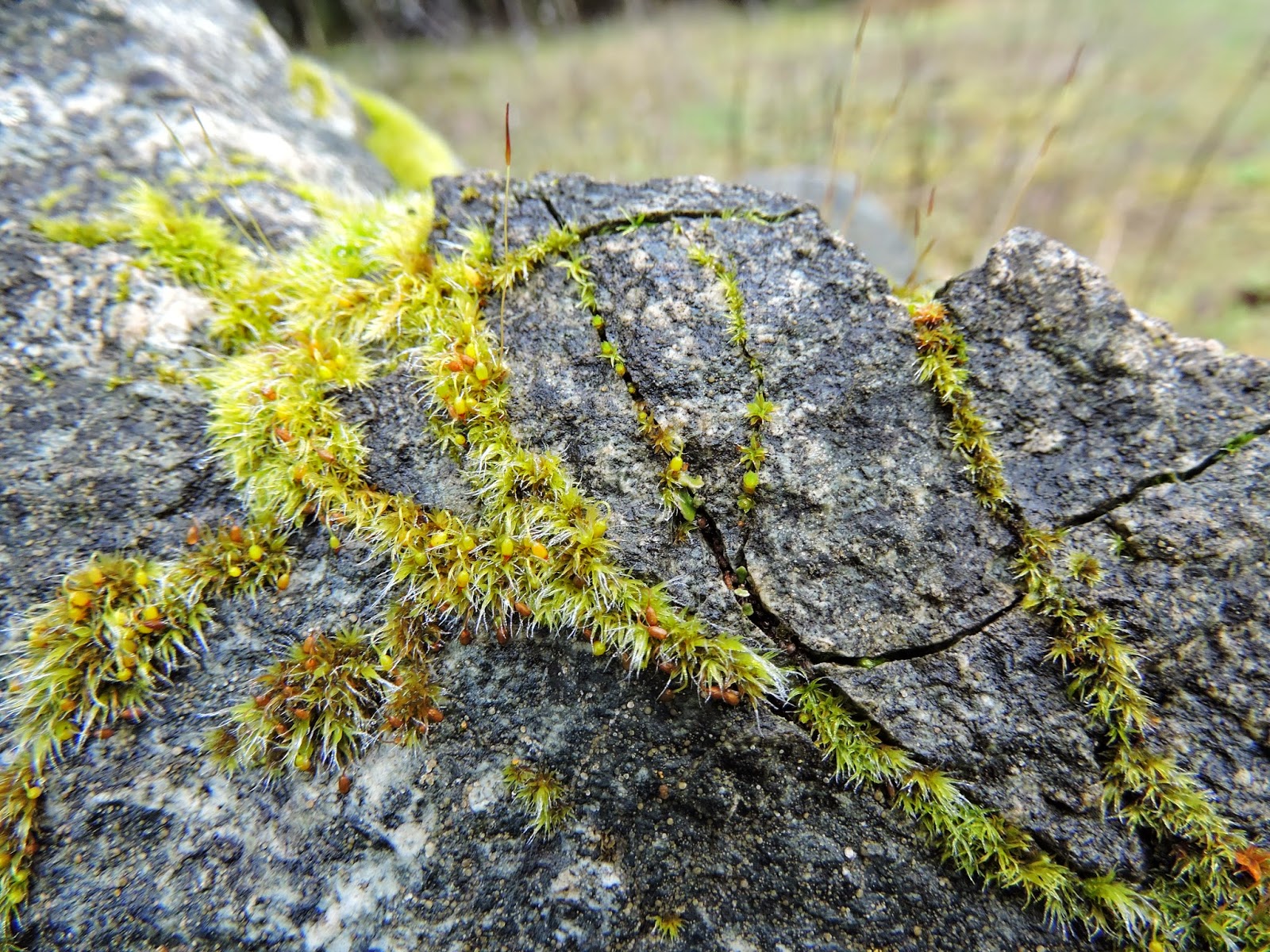 Mosses are able to colonize almost any available location, capitalizing on the cracks formed in rocks, and fascilitating the spread of the cracks by retaining water. Combined with the "rock eating" effects of lichens, is how rocks are broken down into smaller pieces, eventually small enough to become useful as soluble minerals available to "higher" plants.

Mosses, as well as other Bryophytes and ferns, have male and female parts. The sperm, through wind or sometimes rain, makes contact with the female parts, which are sometimes on separate plants, to create a parasitic sporophyte (instead of a seed). The sporophyte produces spores (duh) that will drop to the ground, and if they fall onto or into a suitable location, a mature plant will grow to repeat the cycle.

Mosses will colonize any available space if the right conditions are in place. Even the hardest types of rocks, like this quartz, can be colonized. However, the more porous rocks like sedimentary rocks, will be colonized quicker and easier, quite unlike the denser quartz.


Mosses and lichens exist on every landmass on earth. Lichens endure the most extreme conditions of any plant, able to endure extreme dessication, heat, wind, and radiation. They pay by having an extremely slow growth rate. They feed directly from the rock, releasing acids to break the rock down for sustinence. Studying durable lifeforms like this helps us understand how alien life may be ever more possible. 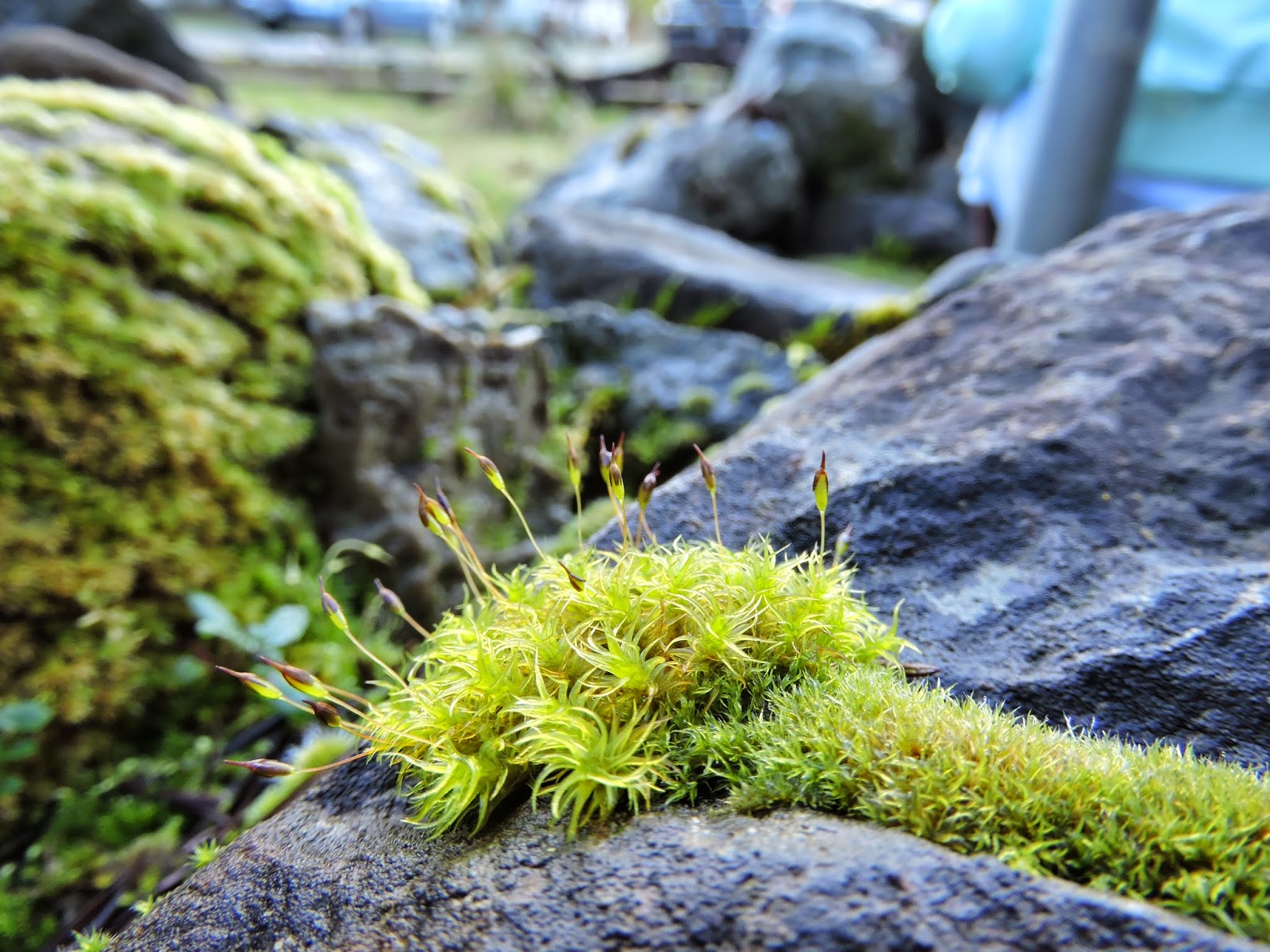 Mosses are crucial to the establishment of higher plants in more extreme locations, like for instance mountain peaks, tundras, or this concrete block retaining wall.

In my garden, weedy plants like Cardamine hirsuta and Heircium sp. seed freely in these mossy spaces, as well as garden plants like Borago and Calendula. Ian Young of the SRGC Bulb Log (see Link List, top right of page) has featured many mossy troughs that have been good places to start seeds of the alpines that he grows. This is probably common in nature where bare soil is rare, like high elevation rocky outcrops. The moss both captures small seed, and holds the moisture to germinate it. Eventually, the moss breaks down and helps create the beginning of what will eventually become soil.

Even metal can be a good host to mosses and lichens, given the conditions are right. Eventually, in thousands of years perhaps, this old piece of farm machinery will become part of the soil.

Oak trees are often hosts to a variety of lichens and mosses. The bark never fails to be absolutely covered in various bryophytes, particularly on the shaded side. 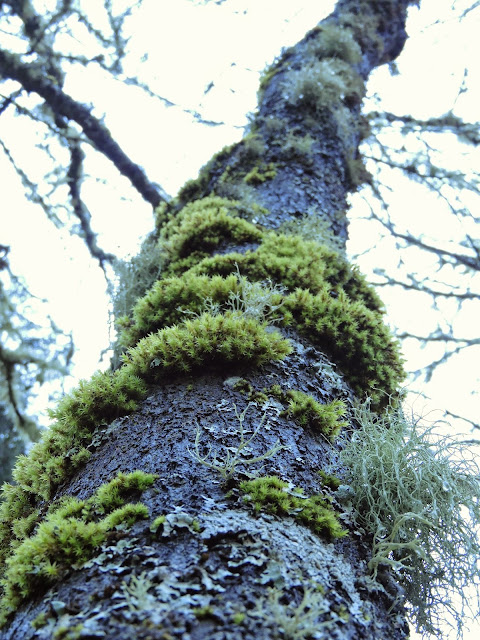 Though other plants (besides mistletoe) do not grow directly on live oak trees, the spongy quick decaying dead wood may be in part due to the variety of organisms that live on it in its living state. This does eventually break down into the soil.﻿

Bryophytes deserve close inspection, besides being just the "greenish color" on an old bridge or similar. The reproductive systems present a bizarreness that we as gardeners aren't accustomed
at 9:25 PM