As the days lengthen, the sun gets higher in the sky, and the daytime temperatures rise, pollinators take the opportunity to make an appearance. Since the recent rains have passed, we have had sunny days in the mid sixties F, warm enough for most bees to fly and stay warm outside of their winter hideout.

Not all pollinators, however, functionally pollinate all flowers, and so are referred to basically as floral visitors, visiting flowers for the resources (nectar, pollen, or floral oils). Pollination on the other hand requires the movement of fertile pollen to the receptive stigma, sometimes between separate plants.

Here are a few of the plant-pollinator interactions I witnessed this week.﻿

Crocuses are excellent sources of forage for early emergent bees of various types. The native wildflowers here have not yet appeared, so the crocuses fill the wait without directly competing for pollinator attention.

As seen here, the flowers also serve as a place to spend the night, keeping the bees off the ground where they may be vulnerable to spiders or other predators.

These bees, probably Andrena sp., were in many of the crocuses in the evenings as the flowers closed.


________________
﻿
Aside from bees, Crocuses are attractive to various types of flies, such as the Syrphid fly here. Syrphids, or hoverfly's, are beneficial in the garden. Their larvae actively hunt aphids. The adults feed on both nectar and pollen.


_____________
﻿
This is the first of the Dutch Crocus hybrids to open, just in time as the Crocus chrysanthus and other early bloomers are on their way out. Small flies were in and out of this individual, perhaps only persuaded by a floral scent undetectable to me. They did appear to carry a few grains of pollen, most likely accidentally.

These two photos show a small fragment of the diversity of insects to visit Crocus flowers. Above, a strange type of fly (anyone know what it is?) and a solitary bee (probably Andrena sp.) are attracted to these flowers. Below, a honeybee exits a flower in a mixed patch. I also saw bumblebees visiting the flowers, but they were too fast and took me for a predator, so fled. 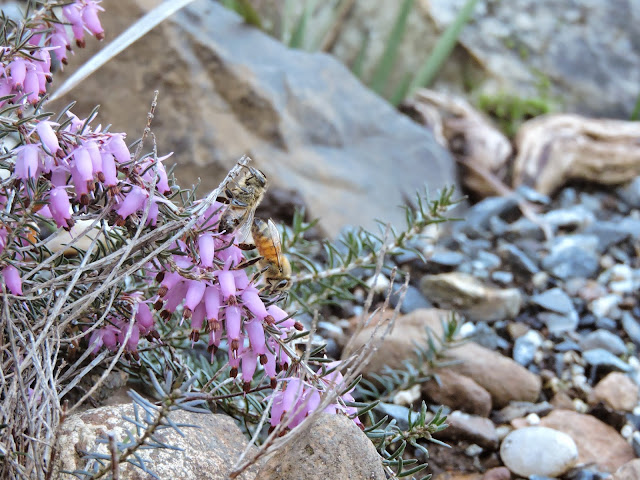 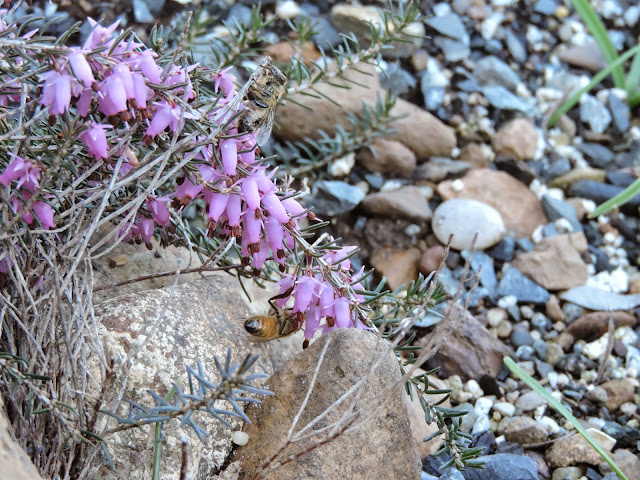 In these pictures, there are two bees. One is alive while the other had died some time ago. It is an empty shell, the insides long gone. It must have not made it back to the hive one evening, and unlike bumblebees, honeybees cannot survive even one night out of the hive.

For the first time in years of observations I have seen honeybees working winter heath (Erica carnea) in my garden. There can be a handful of reasons for this but only one seems likely. Up until this winter, our winters have been cold with daytime temperatures rarely exceeding 45° F and entire areas of the yard remaining frost covered until spring. The mild conditions we have experienced this winter, with only a few night below freezing, have allowed the bees to be active earlier in the year.

My experience with honeybees has shown them to be fickle and picky when it comes to foraging. Unlike bumblebees which will take advantage of any nectar/pollen source available any time of the year, honeybees work major sources exclusively during major flowering periods. They only err from this during the earliest and latest times of the year when sources are scarce.

To put it into context, last year's bitterly cold winter facilitated a compressed flowering period for the early spring bulbs, creating good forage for many early foraging bees. This abundance overshadowed the small heath plants I have. But alas, this is just a guess. 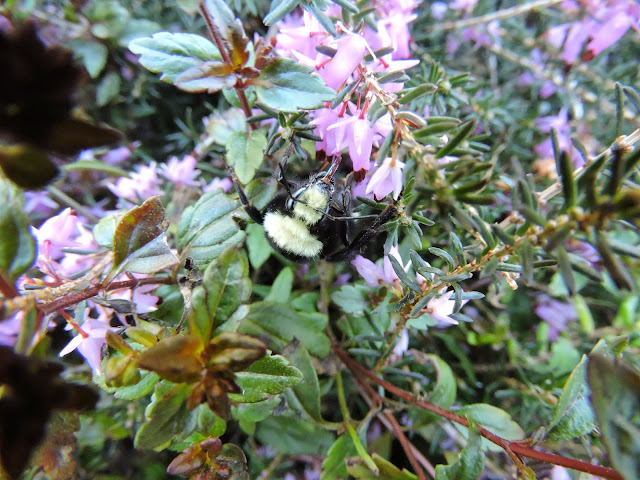 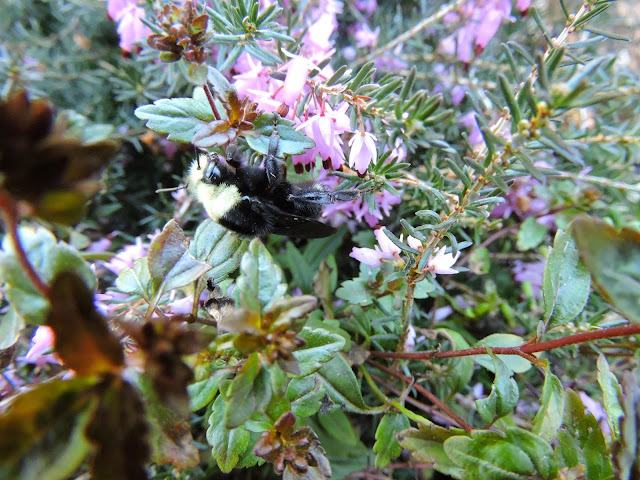 Bumblebees, active early and eagerly, never pass up a meal, and are reliable return customers to the heaths. The queens, I believe, nest in them before building proper nests in evacuated underground rodent tunnels or other available cavities.