Though our nights have been below freezing, our days have been warm and sunny, and a perfect opportunity for bees to forage for early resources. While adult bees feed on nectar (or honey), they need to collect pollen to feed to their young. While nectar supplies carbohydrates, pollen supplies proteins needed for young bees to develop. 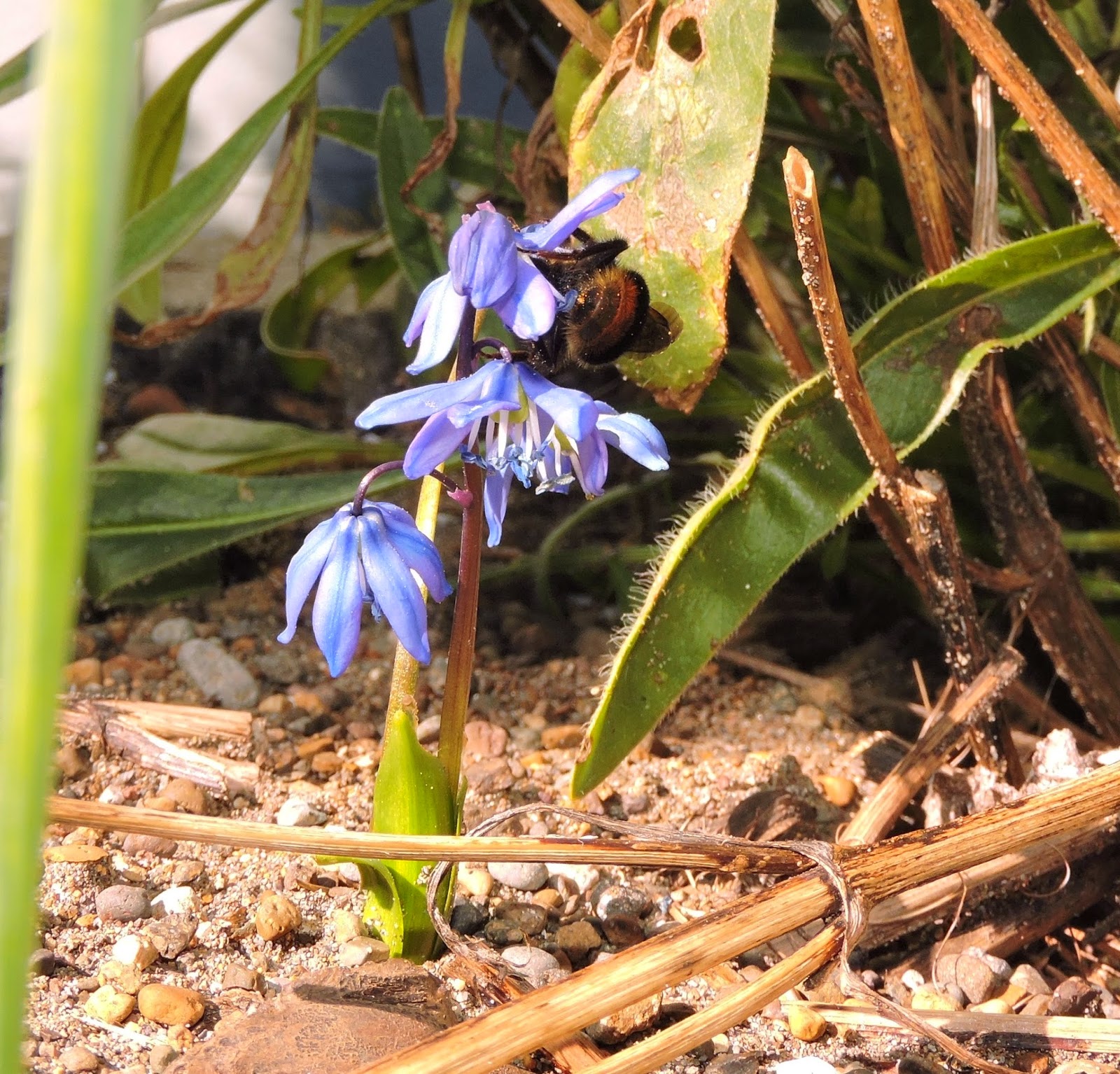 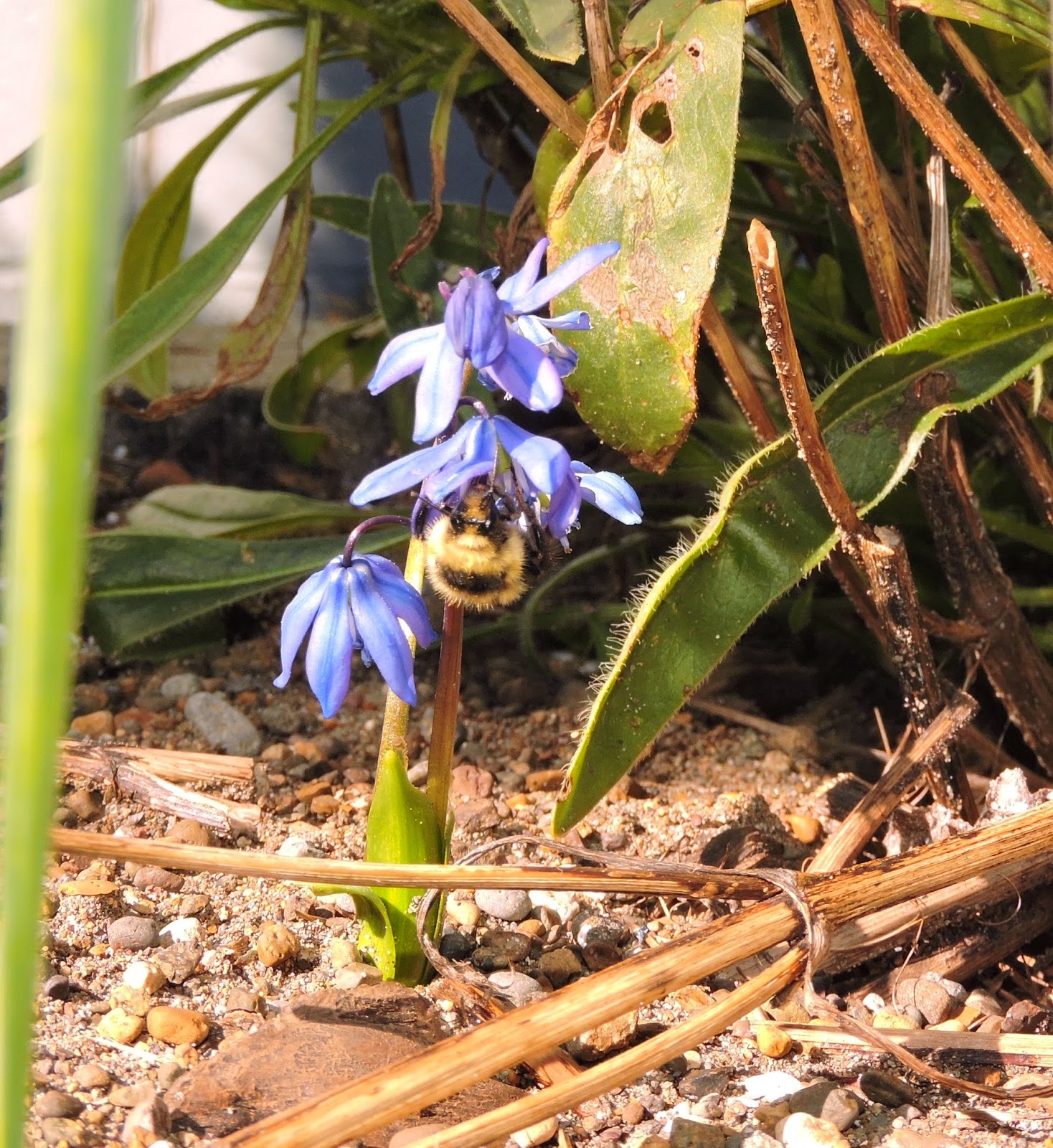 Scilla siberica is a good source of pollen and nectar, and is visited by both bumble- and honeybees in my yard. It is most attractive to them when planted in groups or with various Crocus species or cultivars. 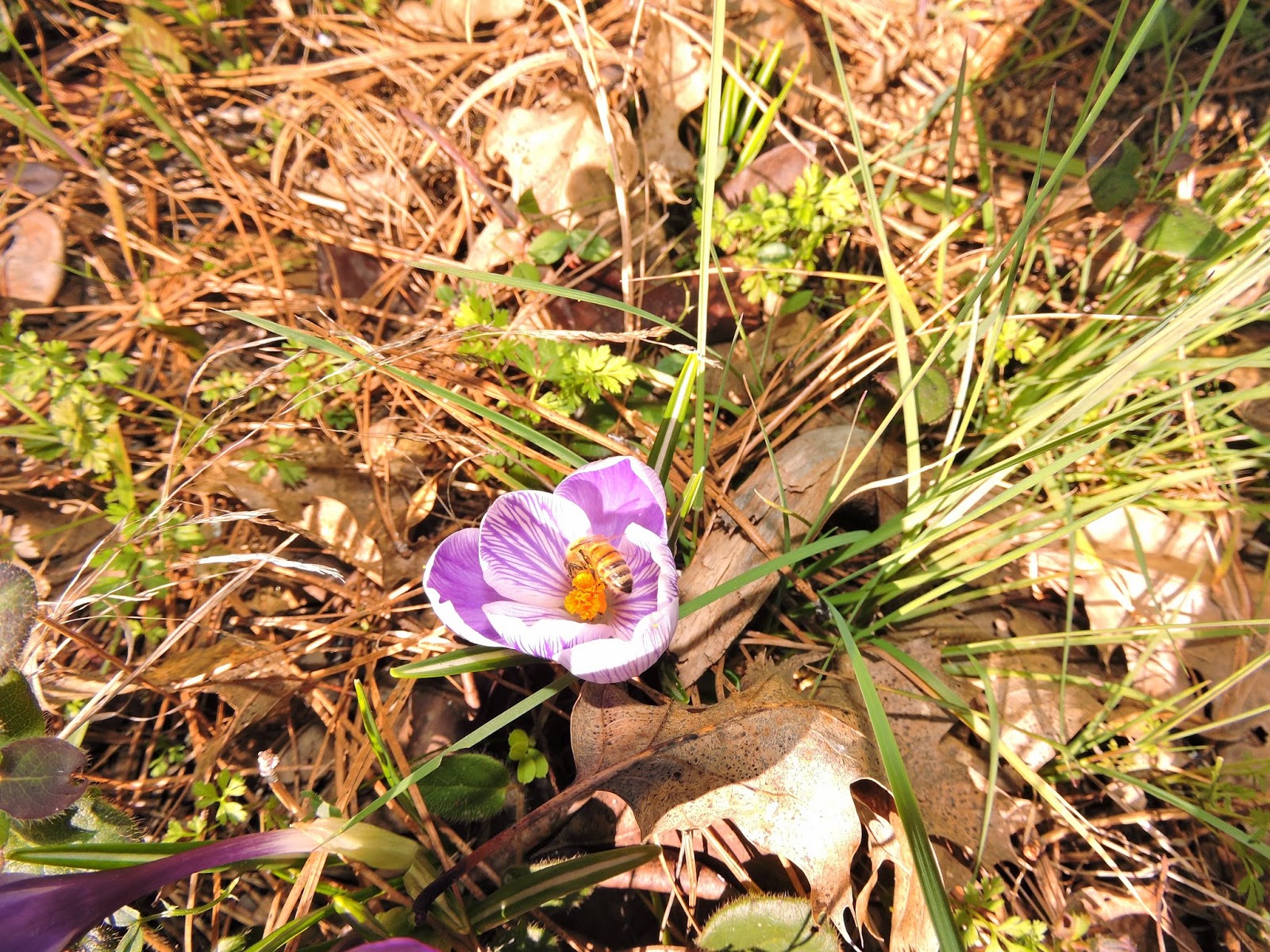 Crocus flowers are spoken of as being one of the best early "bee plants". I find this to be true in general, but not universally accurate from species to species of either Crocus or bee. I saw very few, maybe one or two, bumblebees and honeybees on the early C. chrysanthus and C. sieberi hybrids, yet they are common sights on the Dutch selections of C. vernus, particularly the purple ones like 'Pickwick' and 'Flower Record'.

One thing is clear, the larger crocuses produce much more pollen than some of the smaller species of Crocus. This is an obvious attractant to different types of bees. This is most noticeable with honeybees, whos workers will collect both nectar and pollen on seperate trips. 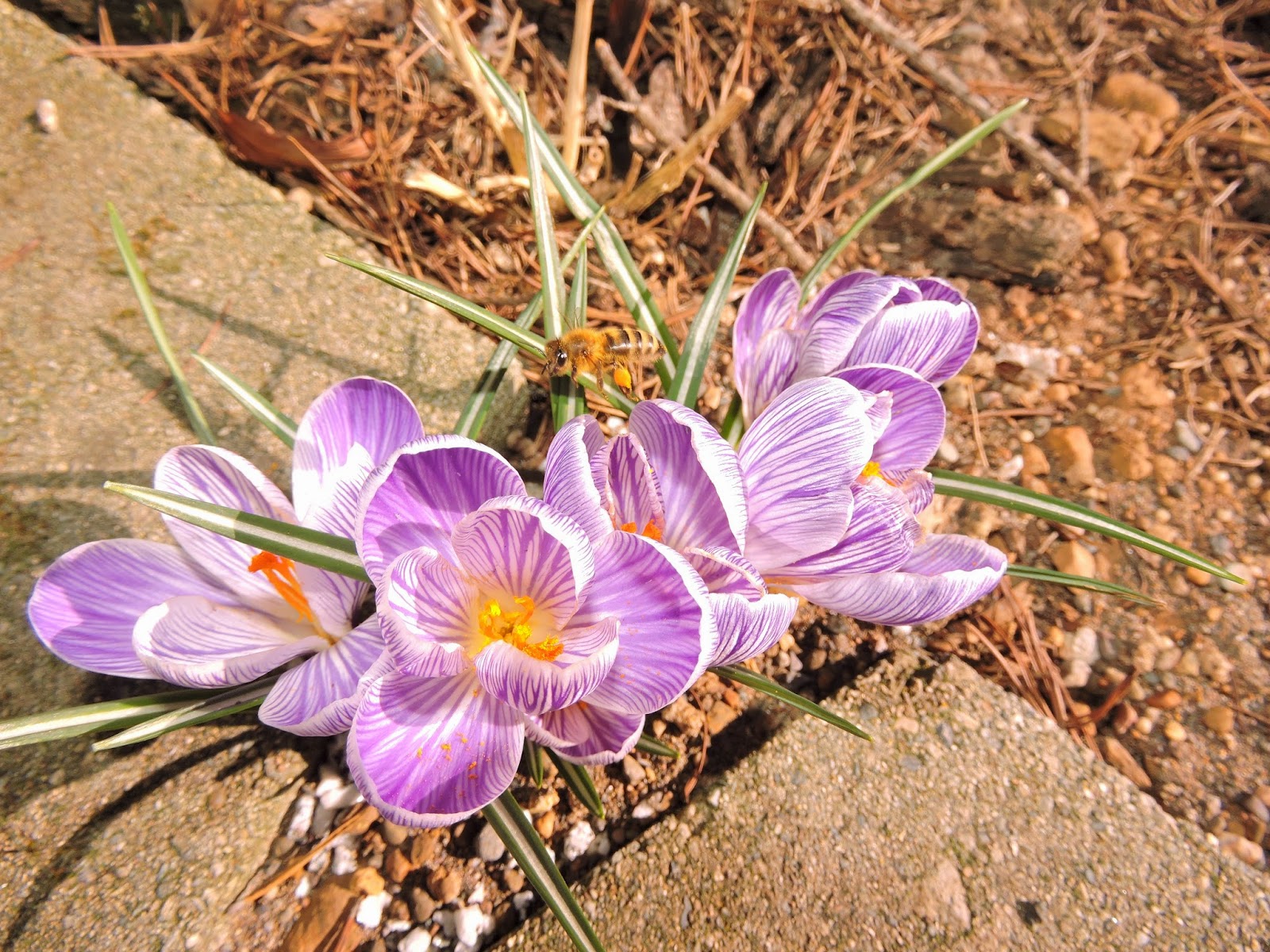 To tell what a bee is foraging for on any flower, you must first take a closer look. Bees and even wasps are docile while foraging, typically only being defensive when you get too close to their nest or hive. Honeybees, and possibly other types of bees, will only collect either pollen or nectar primarily per trip, though both collections may be made on a single type of plant.

The bumblebee below is using its proboscis to probe for nectar. If you can get close enough to see this behavior, you will know that the bee is foraging on that plant for nectar. Pollen may be collected while gathering nectar, but it is only incidental. Studies have found that bees practically attract pollen to their bodies by having an almost undetectable positive charge, while similarly flowers are minutely negatively charged, so the pollen "jumps" onto the bees when they get close enough.

When bees are gathering nectar, they are relatively still, with their head pushed down towards the base of the flower, or wherever the nectar is excreted (called the nectary). Pollen foraging is fairly easy to see, as the bees are quite active inside or on the flowers, particularly around or on the anthers, often moving around the anthers to collect as much as possible.

Watching bees, aside from their behavior, you may also be able to see if their pollen sacks are packed, indicating pollen collection being their main objective on that trip. This is mostly true with honeybees, perhaps less accurate with other types of bees. 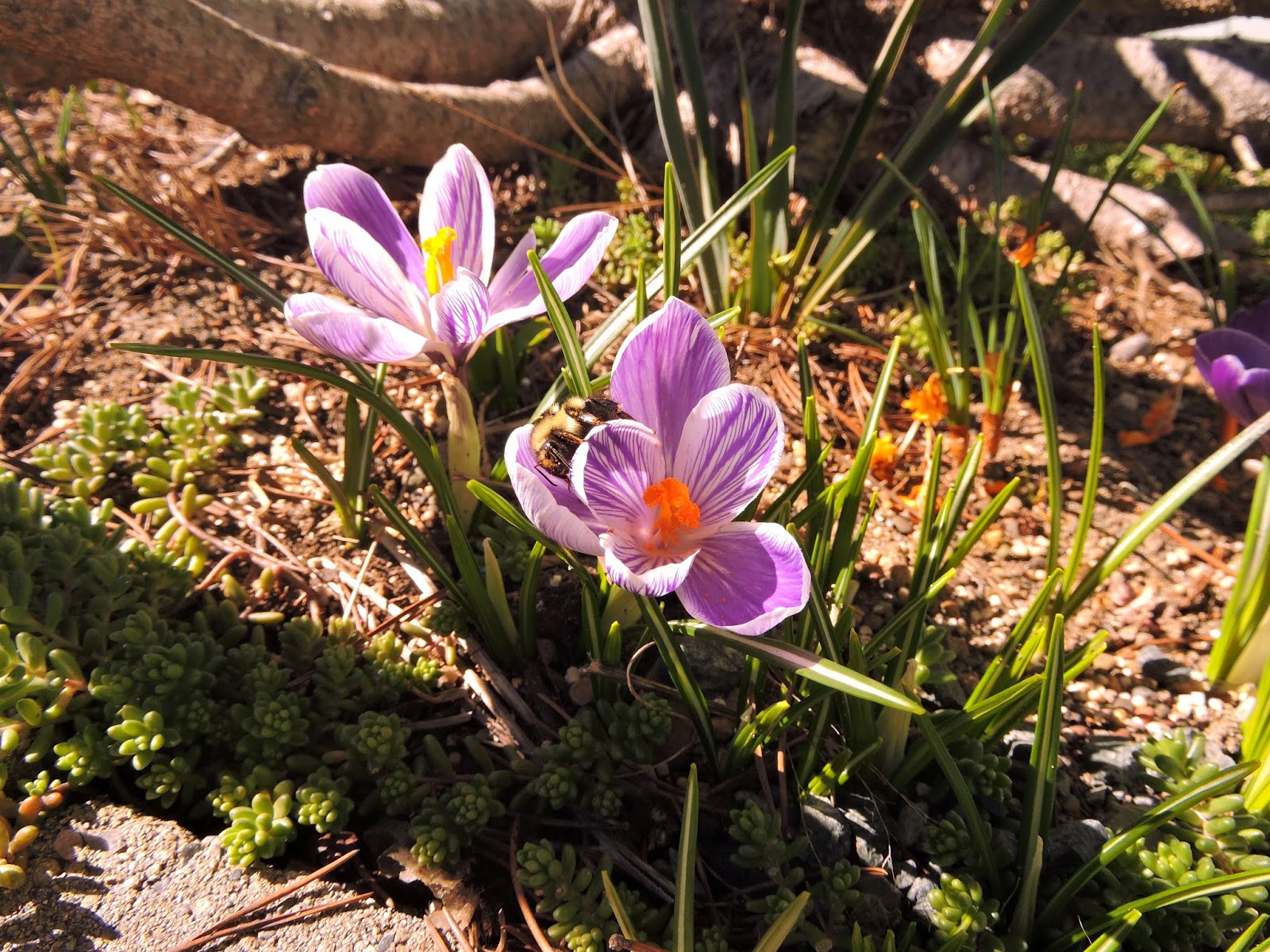 I have never got around to identifying bumblebees, and my knowledge of bee identification in general is fairly rudimentary. If anyone knows what species this is, I am eager to find out!

Bumblebees are by far easier to garden for than honeybees. Bumblebees are generalist pollinators just like honeybees, meaning they don't specialize on any one particular plant but visit what is available. However, my observations have shown honeybees to be much more fickle, only foraging on what they deem as "appropriate". One honeybee hive differs from the next, so some hives may make better use of the flowering plants than others. I wonder how they determine which floral resources are best?

I watched for a while as this bumblebee queen, easy to identify by her large size (about the length of a quarter), negotiated this reletively small Crocus flower. I'm not really sure what her intentions were, she never really seemed to find a way in. It was like watching a Sumo wrestler attempt to get in the backseat of a Mini Cooper. 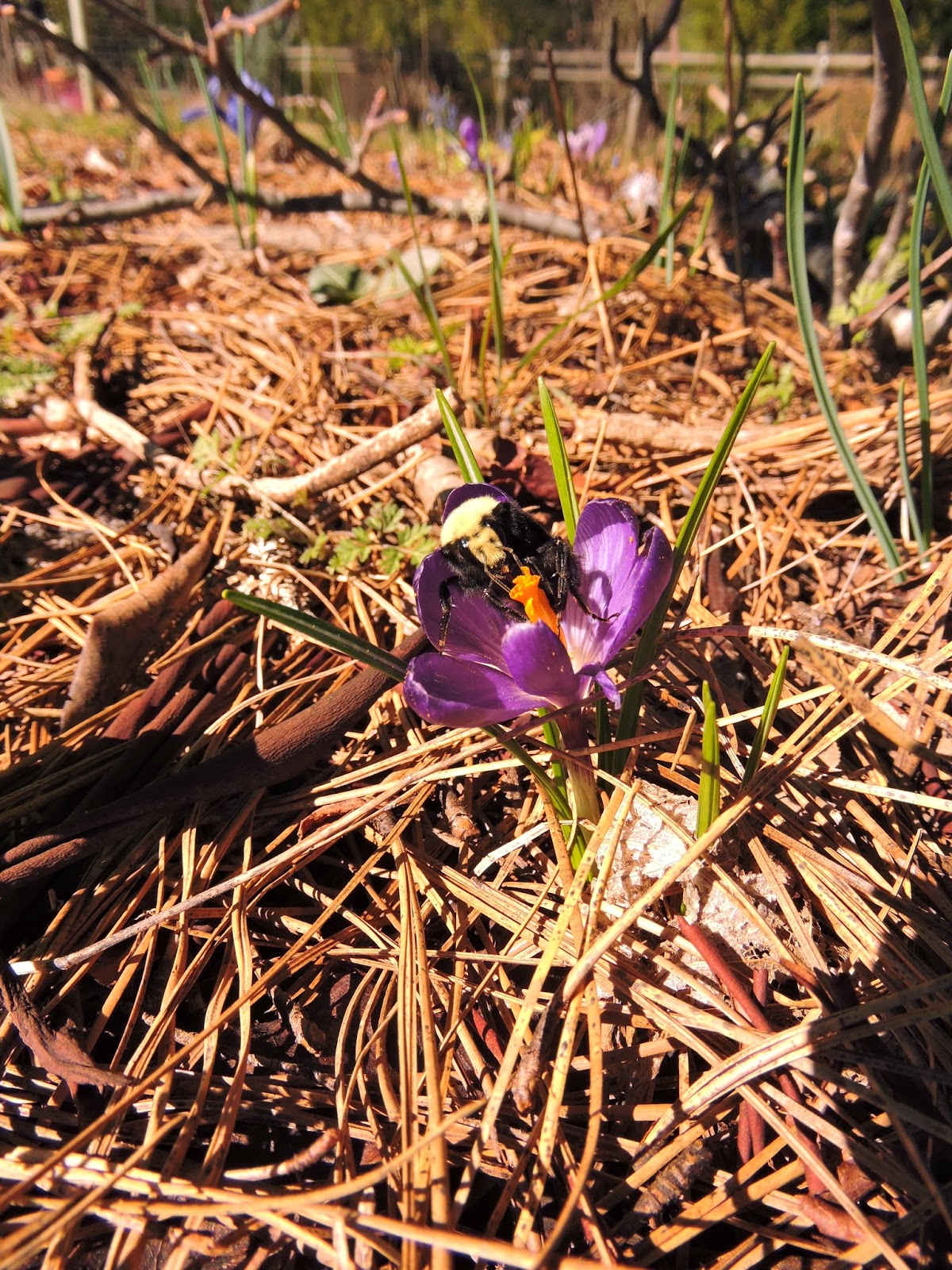 Though the bumble- and honeybees have been going nuts for the large Dutch selections of Crocus vernus, solitary bees seem to be uninterested. This one bee, below, was the only solitary bee I observed.

This white selection of Crocus vernus needs a more sheltered position than others, because in more exposed sites it tends to be very short lived in my experience. It is also the last to open of the large Dutch selections, and works very nicely with the purple and striped forms. It is good in a somewhat shaded site, the bright white flowers standing out against the shadows.

I would very much like to know what kind of bee this is. My guess based on the basic morphology is that it is some type of Andrena, but I am not an expert entomologist (barely an amateur, more like a blind marksman). If anyone has the answer, I'd like to hear it!