Various contagious forms of Influenza are circulating the American population, and my workplace and town are no exception. Obviously, this is the best time to stand out in the cold and take pictures! 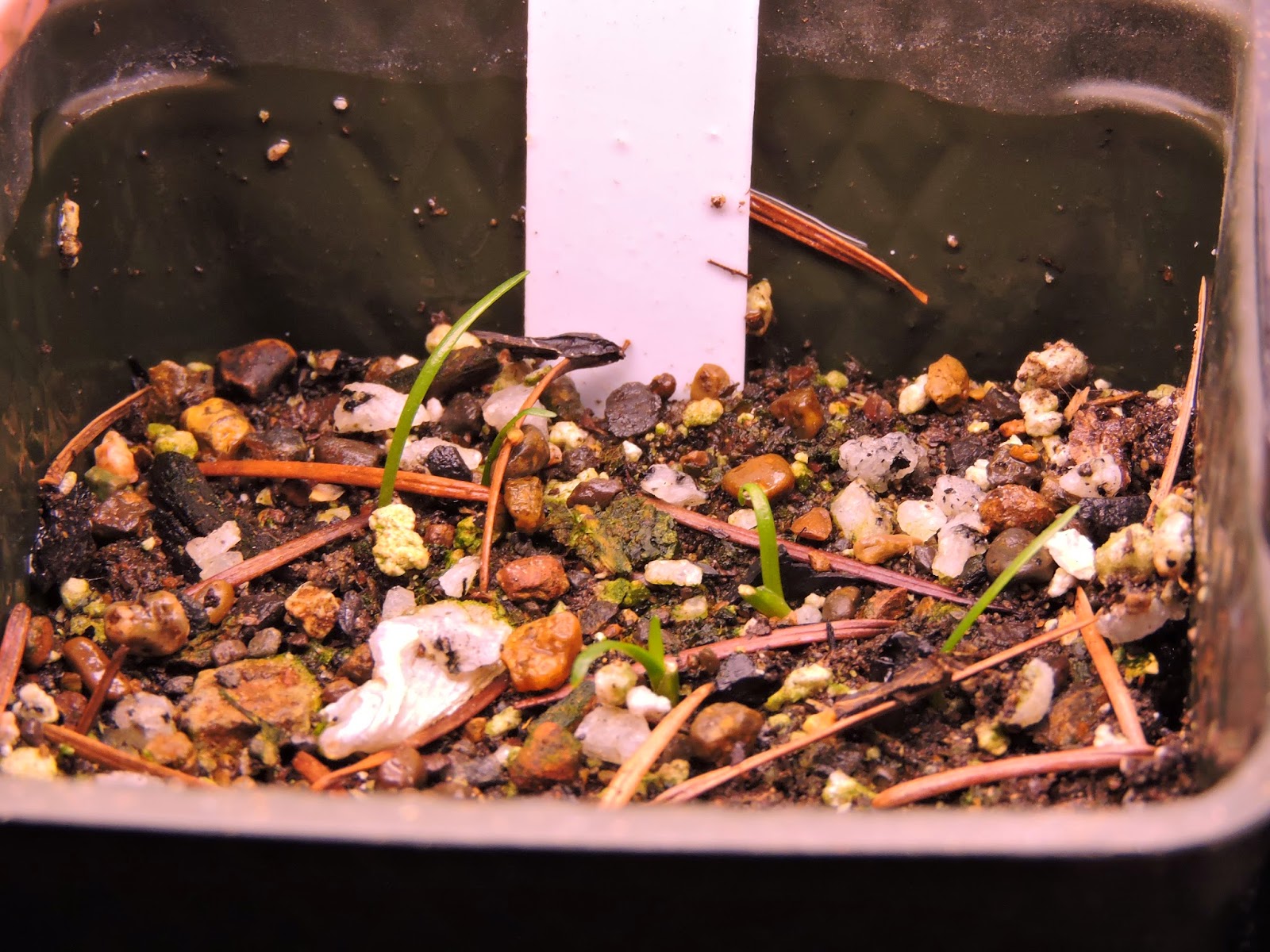 Agapanthus seedlings sown last Autumn. The mild conditions of this so-called "winter" have allowed these supposedly semi-tender seedlings to grow without any issues. The seeds were sown just under the surface as soon as they were collected from plants growing in a neighbors garden nearby. They were left outside under grow lights with a heat pad. The soil mix is mostly sand and sifted compost, 3:1 parts respectively. Seeds sown under a layer of grit in another pot (a test) have not appeared, suggesting that scratching the seed into the surface is better. These small types of experiments make growing plants from seed fun! Green thumb is a learned skill, anyone can learn how to grow plants from seed by experimentation. Hazelnut, Corylus sp.
The female flowers are now starting to open. They consist of a few small red stigmas sticking out of small buds near the branch tips. You can see them here at the center top of the photo. 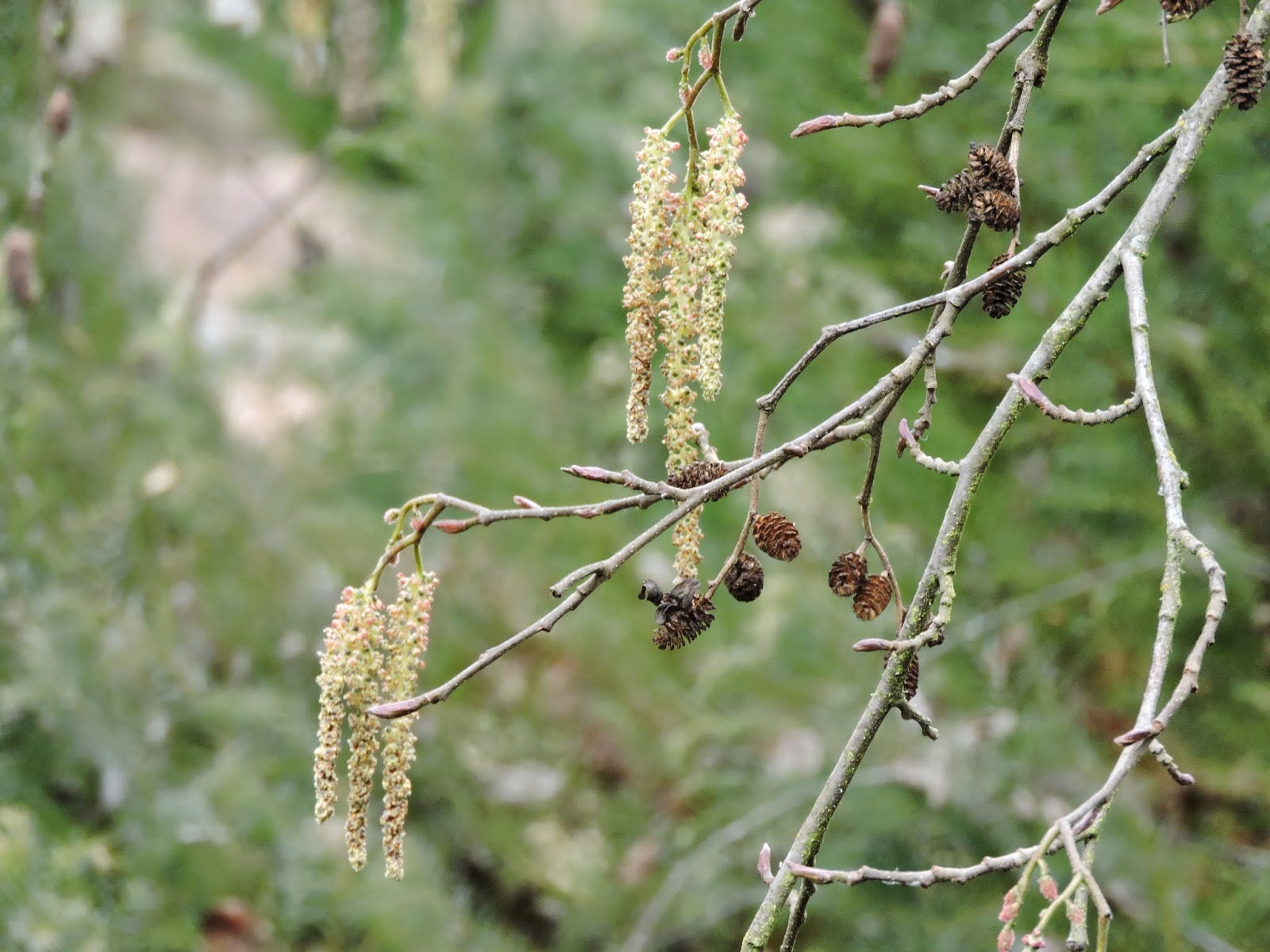 Alder!
Here you can see the flowers of what I believe is Alnus incana, or a subspecies of it, growing in an arboretum down the road. The small cones are the female flowers. Alder trees have the ability to "fix" nitrogen from the air into a form that plants can utilize, which is obviously beneficial to the vegetation surrounding them. Unfortunately, the invasive Rubus armeniacus (Armenian blackberry) that shares the riverside habitat with the Alnus sp. probably benefits the most from this ability. 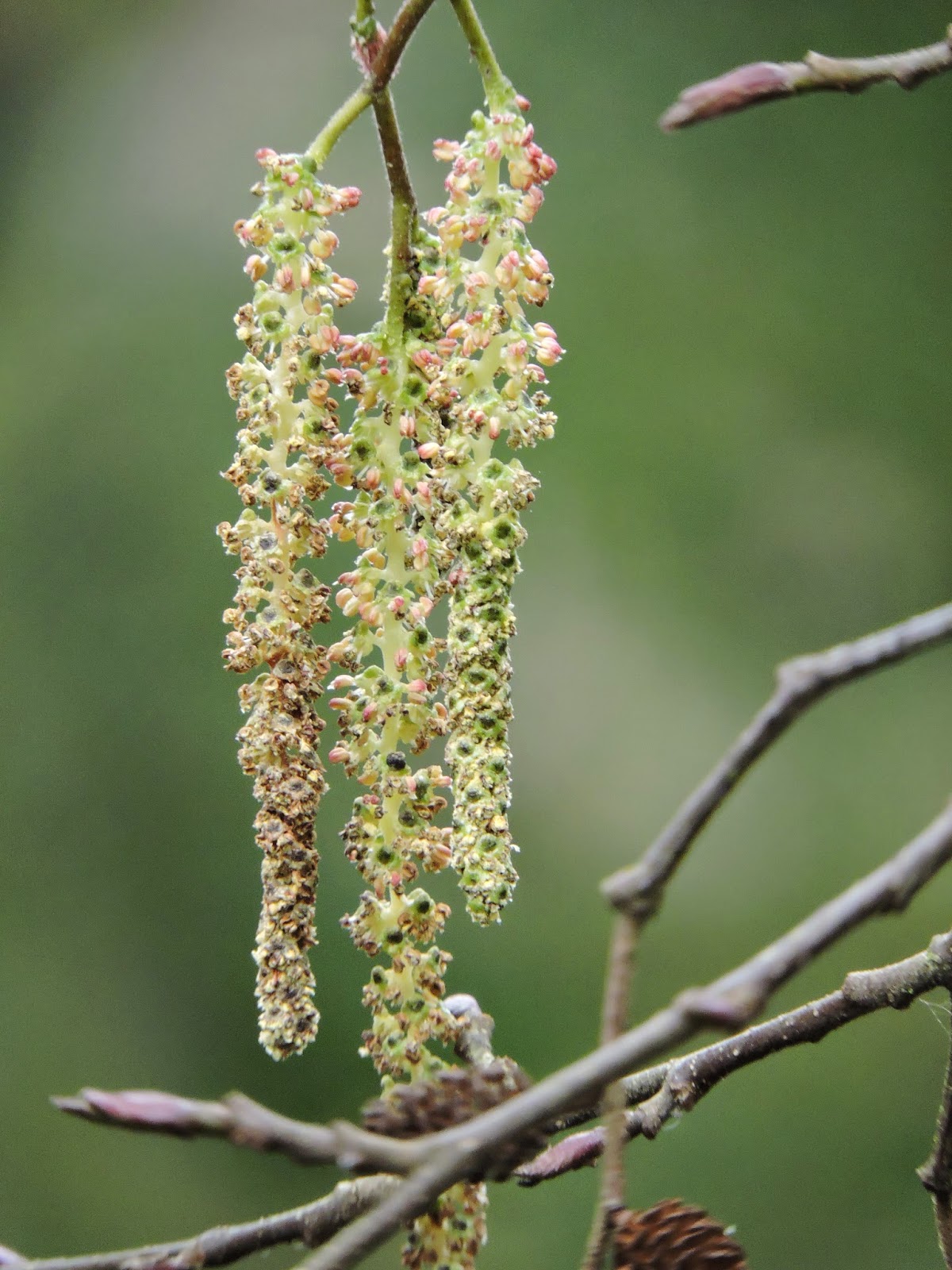 Alnus incana has somewhat looser catkins to those of the Hazels, with the addition of red color on the tiny individual florets. The Alnus species here grow in more shade relative to the Hazelnut trees. 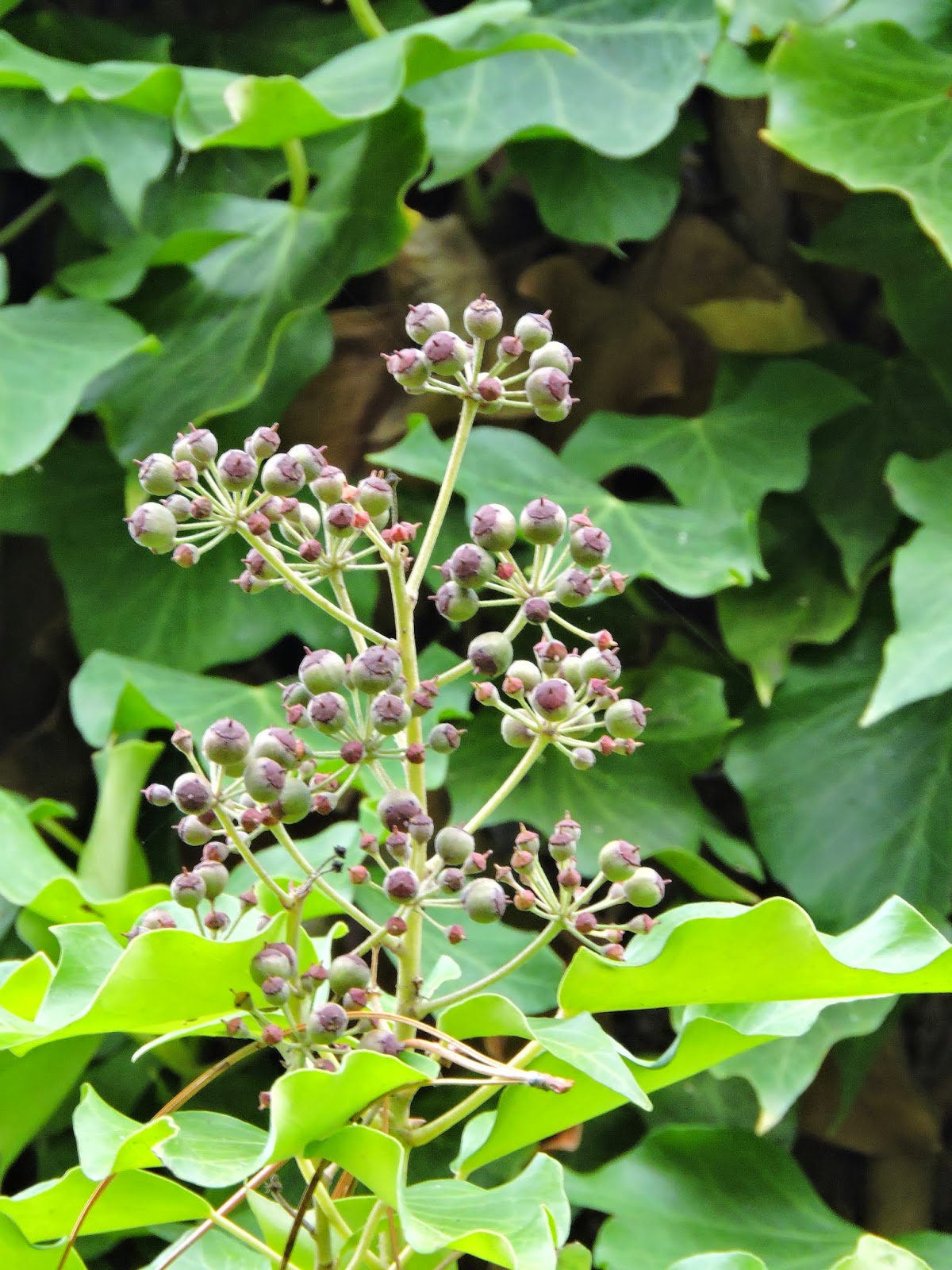 Hedera helix
English Ivy is extremely invasive, spreading by adventitious roots and seeds, which are probably spread by birds who eat the berries. It is shocking to me to see it for sale, anywhere, particularly because of its ability to smother trees and damaging buildings if not managed extensively. Why it is not on more noxious weed lists is beyond my comprehension. Any responsible, or even rational gardener should avoid allowing this plant to grow in their garden, if not for the invasive nature and difficulty of removal, then for the heavy workload this plants' maintenance entails.

For those familiar with the genus Aralia, it shouldn't be a surprise that it is a member of the Araliaceae, or Aralia family. Pictured here are the unripe Ivy berries. They are toxic to people, though have been used medicinally as an expectorant. 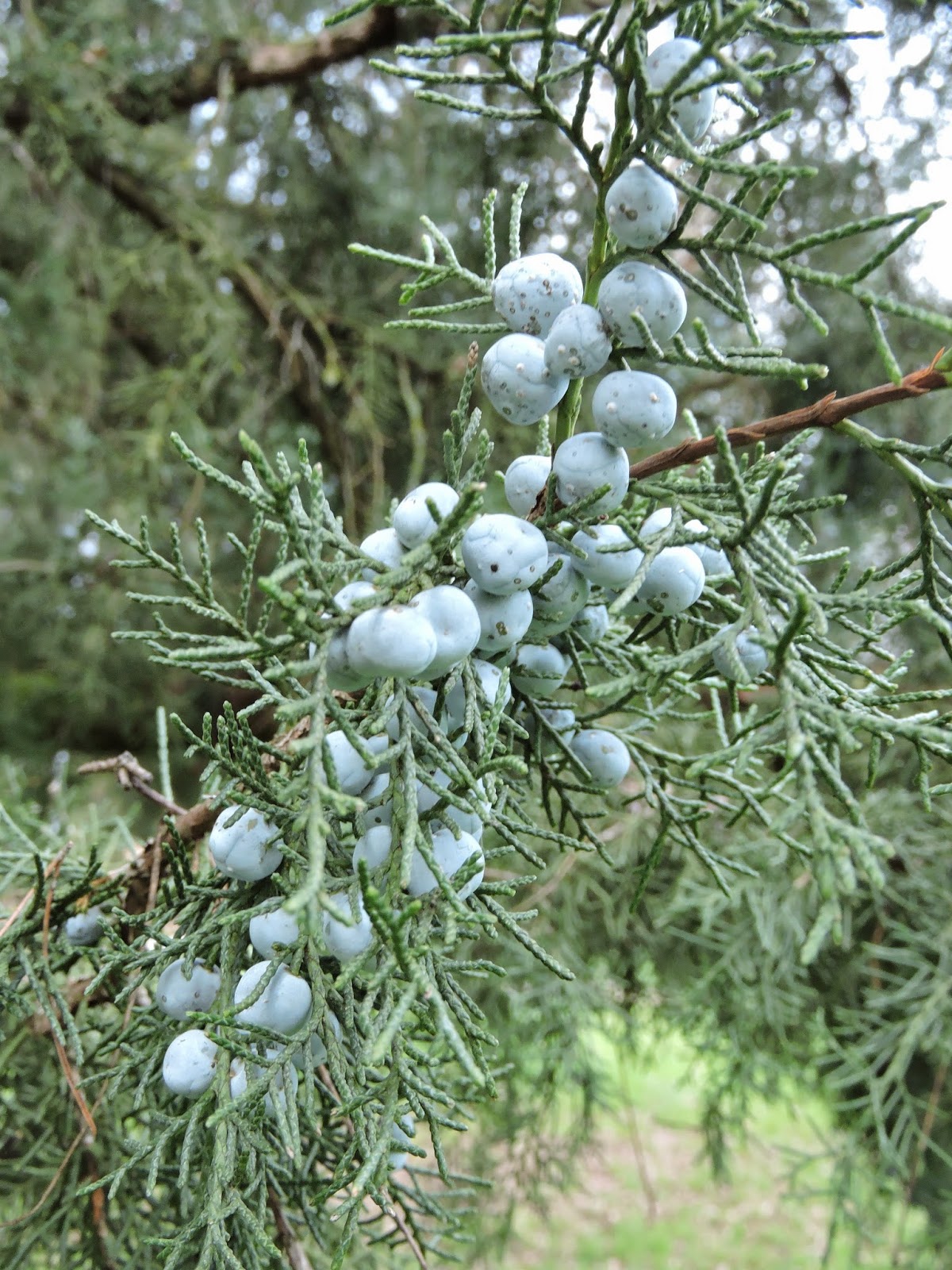 An ingredient in gin, Juniper berries are actually small cones with fused scales. 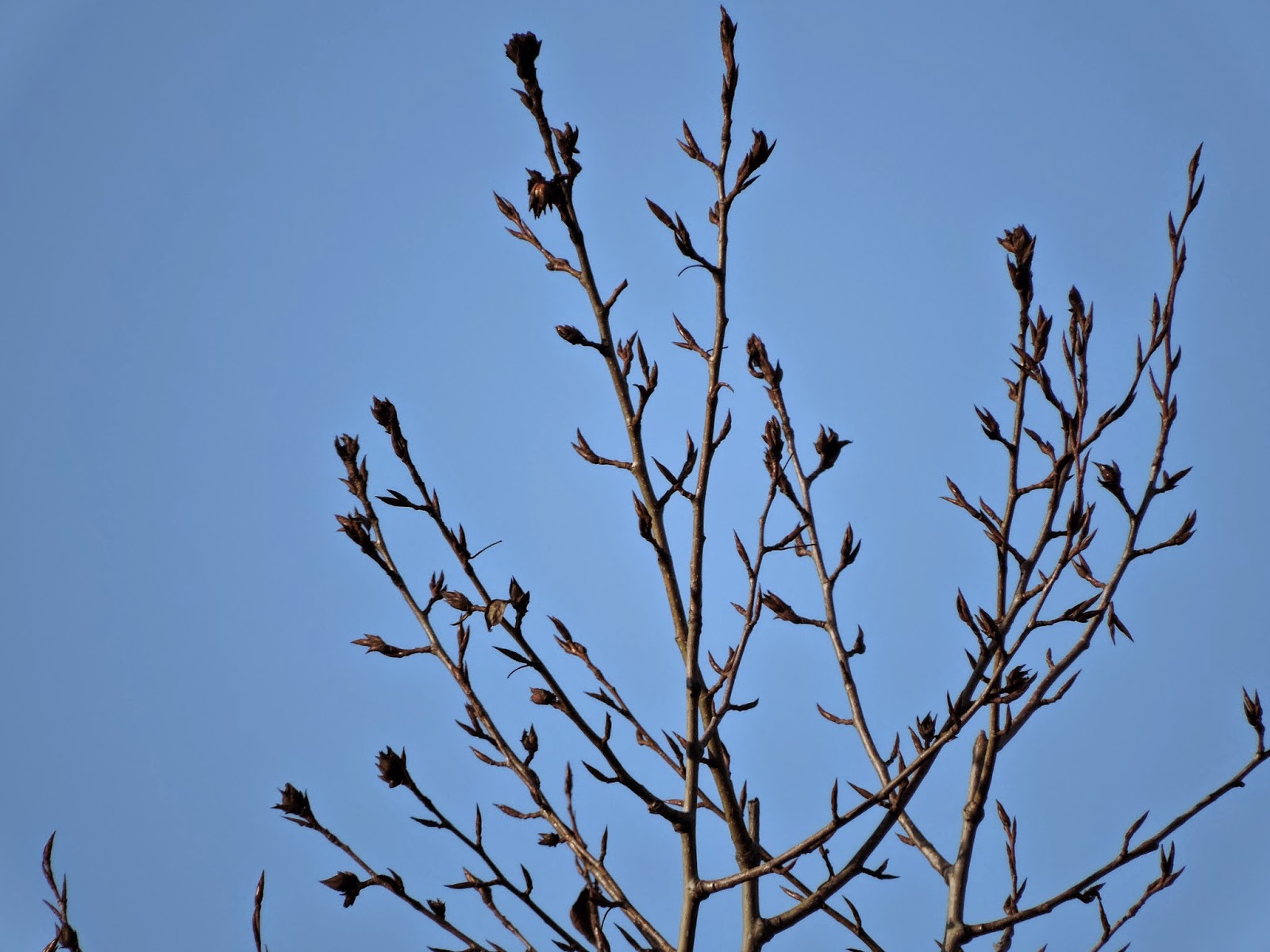 Leaves emerging at the crown of a 100' Oak (Quercus sp.) using the powerfully clear zoom on my Nikon Coolpix P600 (best Christmas gift ever, by the way!) 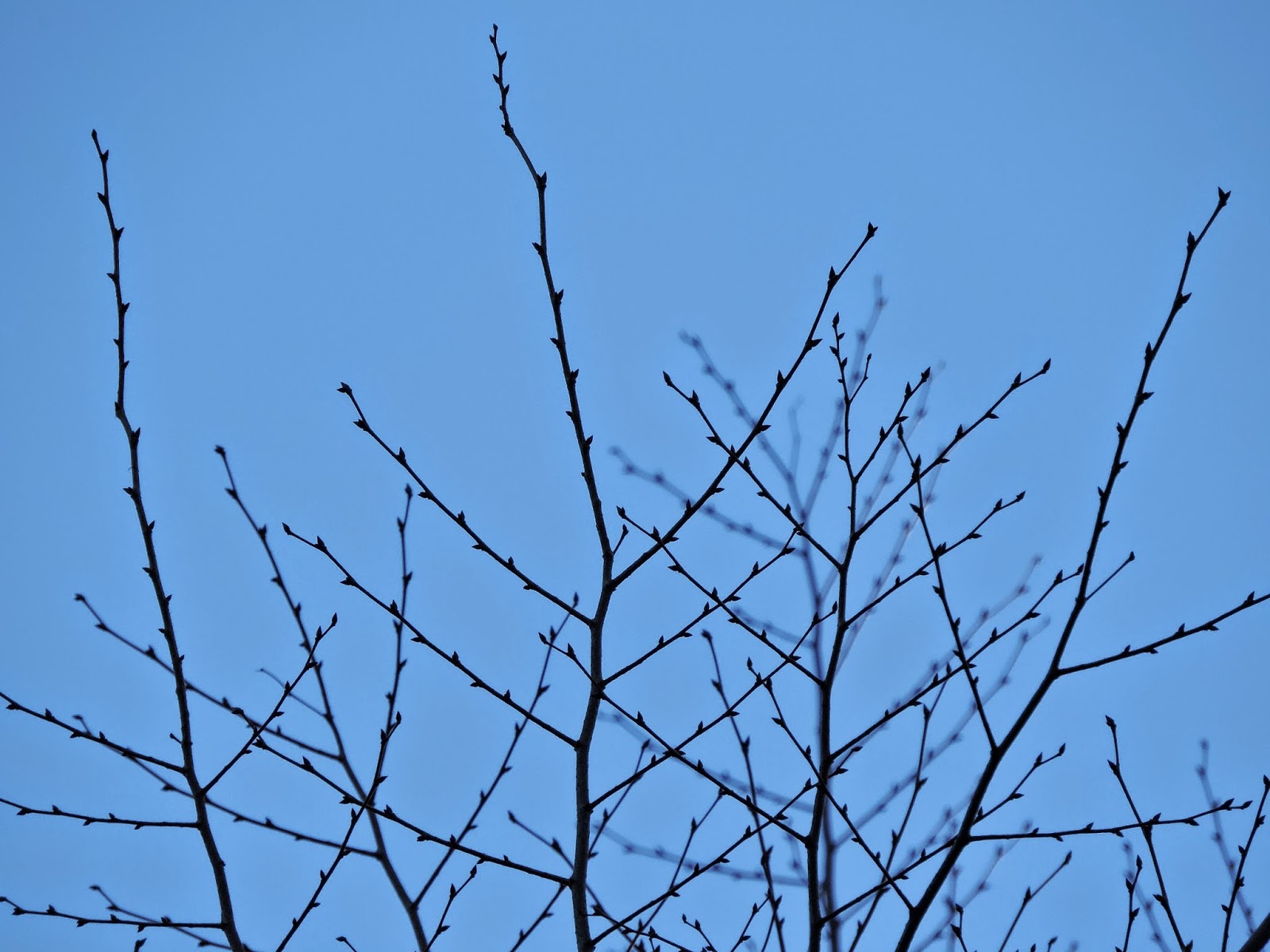 The fog and the sky of this "winter" offer many unique backgrounds to the bare branches. The stark blues and grays of the cold seasons offer a unique contrast to the yellows of summer. It is worth taking the time to go stare at the desolate lifelessness that is quietly preparing to explode into life as the days get longer. Try not to get sick! Which reminds me, I'm running low on Echinacea tea...
at 11:03 PM